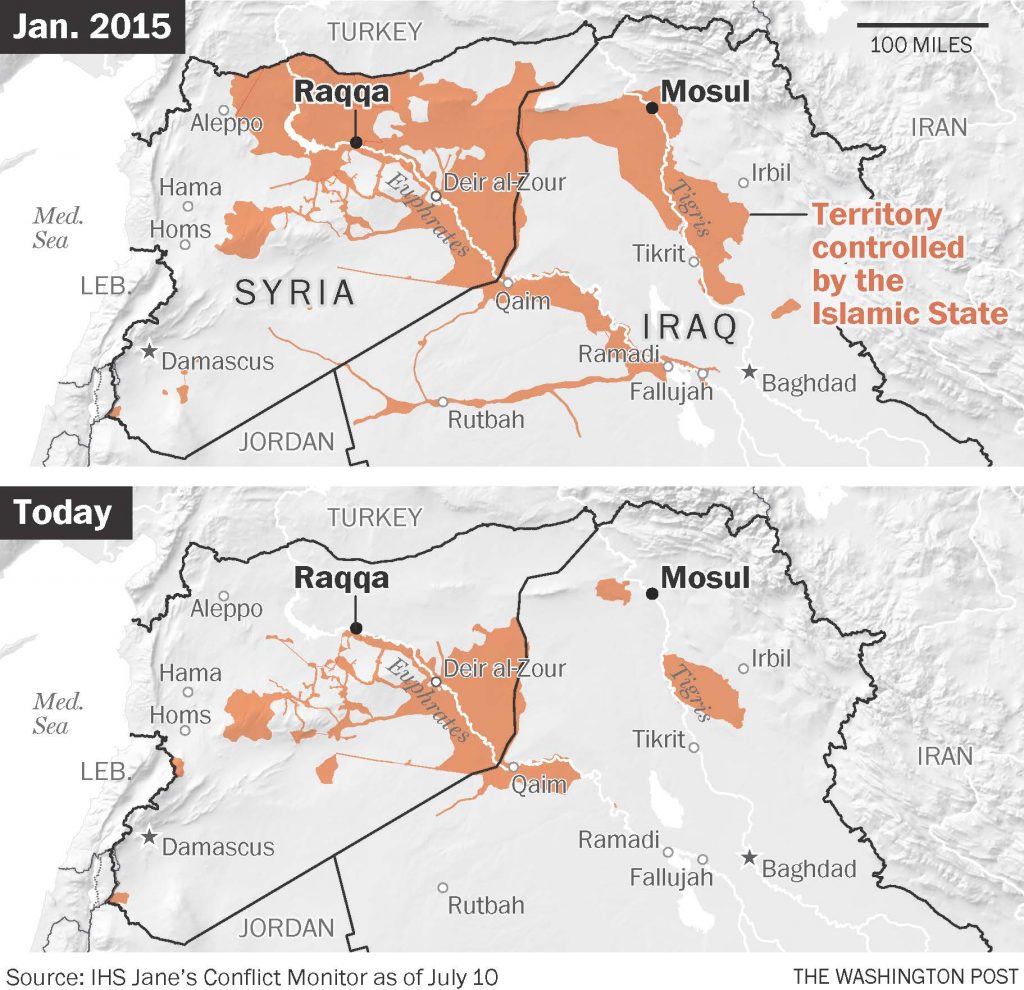 The battle of Mosul is over, but the war against the Islamic State is far from done. The terrorists have lost some 60 percent of the territory they controlled at the peak of their expansion, but that leaves a sizable area, mostly in Syria but also Iraq, to be recaptured.

Much of it is uninhabited desert, but significant towns and cities in both countries, and almost a whole province in Syria, remain in the terrorists’ hands. Among them are staunch IS strongholds, located in some of the most remote terrain of the war. In some instances, it isn’t yet clear which forces will undertake the battles, and potential local and international flash points lie ahead as competing powers vie for the chance to control territory.

Here are six of the toughest battles still to be fought.

Raqqa: The five-week-old battle for the IS’s self-proclaimed capital of Raqqa is getting underway, launched by a U.S.-backed force of Kurds and Arabs known as the Syrian Democratic Forces and aided by U.S. Special Operations troops. In the first month, they took 20 percent of the city, according to Col. Ryan Dillon, a U.S. military spokesman. That doesn’t mean there are another five months of combat left, however. Past battles have proved unpredictable, with the terrorists crumbling or fleeing in some places and putting up a stiff fight in others. Raqqa is smaller than Mosul and less densely populated, but there is no reason to believe they will defend it any less fiercely – and the battle for Mosul lasted nine months.

Deir al-Zour: The city of Deir al-Zour is the capital of a province of the same name, both of which are almost entirely under IS control. IS commanders and fighters have been relocating there for months from other front lines, and this is likely to be where they make their last stand. Vast tracts of the province, roughly the size of Maine, are empty desert. But the terrorists control a string of towns running along the Euphrates River, such as Mayadeen, where IS leaders have reportedly re-congregated. Exactly who will end up waging the battles for Deir al-Zour is unclear. Most probably it will be the Syrian-Iranian-Russian alliance that moves on the city, where a small garrison of Syrian soldiers has been holding out for years. Regime loyalists have already begun advancing into the province from the southwest. But the U.S.-backed SDF also holds a northern slice of the province and could decide to head south after Raqqa, making Deir al-Zour a potential international flash point.

Bukamal (also known as Abu Kamal): This town on the Iraqi border is the southeastern-most of the Euphrates valley towns in Deir al-Zour province. The U.S. military has been trying to build a force of Syrian rebels capable of taking the town from a remote desert base 200 miles away. But their presence has created tensions between the United States and the Syrian and Iranian backed forces operating nearby, who have now blocked the way. So it now seems most likely that the eventual battle for Bukamal will also fall to Syrian government loyalists, thereby putting them back in charge of the main highway linking Damascus to Baghdad.

Tal Afar: This mid-sized town around 30 miles west of Mosul is expected to be the next target of the military campaign in Iraq. It is renowned as one of the IS’s most die-hard strongholds, with a long history of insurgency and is likely to put up stiff resistance. It is also one of the only towns in northwestern Iraq that has a sizable Shiite population, which fled when IS swept through in 2014. Now it is surrounded by Shiite militias, and although there has not yet been a decision on whether they or the Iraqi army will undertake the offensive, Tal Afar could ignite future sectarian tensions.

Hawija: Located in an isolated pocket of mostly rural territory southwest of the Kurdish-controlled city of Kirkuk, Hawija is the easternmost of IS’s territories. It is also known as an early outpost of Islamic State sympathies. Hawija is likewise completely surrounded, on three sides by Kurdish Peshmerga and to the south by the Iraqi army. There is no agreement yet on whether the Kurds or the Iraqi security forces, or both, will undertake the battle.

Al Qaim: Located just across the Iraqi border from Syria’s Bukamal, Al Qaim is the most significant town left under IS control in the desert province of Anbar. It is surrounded by a large sweep of desert terrain and is another of the locations where IS is thought to have relocated many of its leading commanders. The Iraqi army will most probably lead the battle, which will link it up with whoever advances into the adjoining Syrian town of Bukamal.