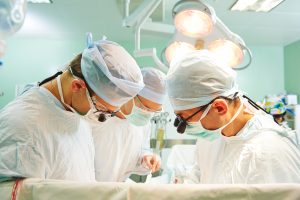 Surgeons have developed a minimally invasive surgery to address chronic pancreatitis, a painful condition that can be remedied by removing the pancreas.

While some cases of chronic pancreatitis are caused by alcoholism, most of them are from a genetic mutation. But people with the condition are often written off as alcoholics or drug addicts because of the opioids they use to manage the pain, said Martin Makary, a professor of surgery at the Johns Hopkins University School of Medicine. Many of them, often men in their 20s and 30s, can have trouble eating and holding jobs because of severe pain.

“The people that come to us with a gene mutation, that is no fault of their own, have already been accused multiple times of being alcoholic and have been told that there’s nothing to be done and that they’re drug-seeking patients,” Makary said. “Many of these patients have had their lives ruined by this disease.”

But the surgery to remove the pancreas to fix chronic pancreatitis can often be very painful in itself. The minimally invasive surgery Makary and the Hopkins team developed can result in less pain, fewer opioids used to manage post-operative pain and fewer complications, Makary said. A report on their findings was published in the June print edition of JAMA Surgery.

The approach is called laparoscopic total pancreatectomy with islet cell autotransplantation. With it, surgeons take islet cells from the pancreas and insert them into the liver, where they can create insulin and help control blood sugar for five to 10 years before wearing out.

The Hopkins team performed the surgery on 20 patients over three years. Almost all of them had less or no pain after six months, while 60 percent no longer needed opioids to manage pain.

The technique appeared to have benefits over traditional surgical approaches, said Jonathan S. Bromberg, a professor of surgery and microbiology and immunology and the vice chair for research at the University of Maryland School of Medicine.

“It looked like they had a very good success rate in treating pain here,” he said. “Those are really good solid results. It’s not 100 percent but I think that’s the nature of this disease.”

Patients who have their pancreas removed end up developing diabetes, a trade off that many will accept in exchange for less pain. They also need enzyme tablets when they eat to replace digestive enzymes made by the pancreas.

“While the operation is not a perfect solution because most patients do become diabetic eventually, it does offer them an option to trade a very debilitating condition for mild or severe diabetes,” Makary said.

Makary said the primary goal of the minimally invasive surgery would be to reduce patients’ dependence on opioids.

“With an increase in recognition that opioids are a major problem, Maryland in particular has record high rates of opioid use,” he said. “I think the most important aspect of minimally invasive surgery is it reduces the need for opiates.”