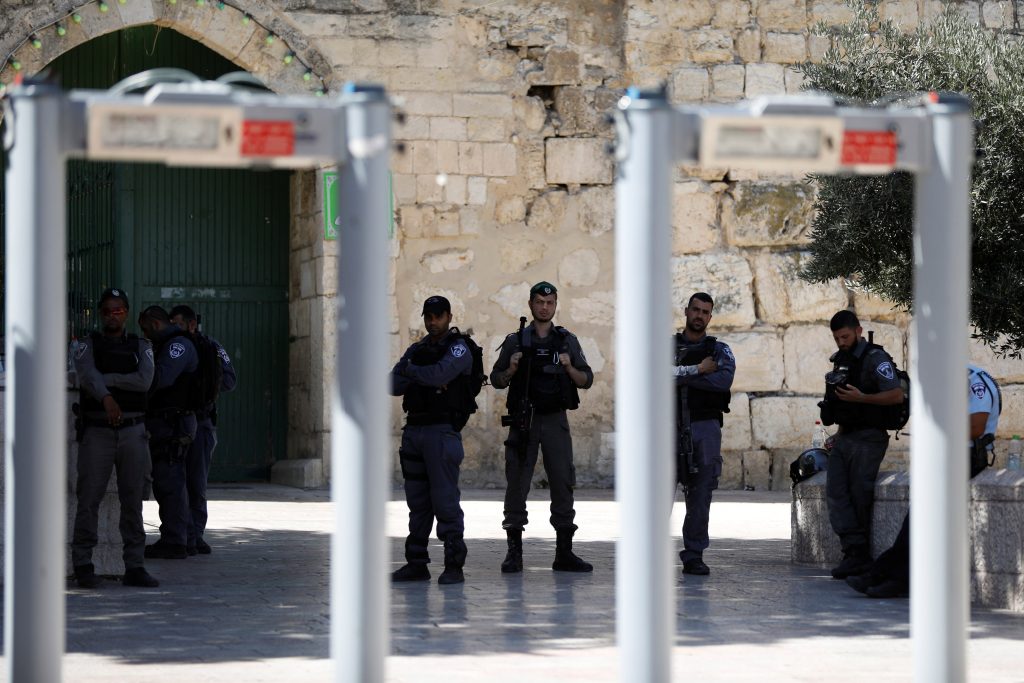 Prime Minister Binyamin Netanyahu left Motzoei Shabbos for conferences in Paris and Budapest to take place this week. In Paris, PM Netanyahu will meet new French President Emmanuel Macron, with the two discussing issues on the Middle East agenda, while in Budapest, PM Netanyahu will meet with leaders of that country and of Poland, the Czech Republic and Slovakia to discuss strengthening ties between Israel and those countries.

Israeli forces conducted a security sweep early Sunday and began installing the detectors. Given the large number of Arabs expected to enter the site, the new measures could slow movement and spark tensions.

The attack triggered a rare phone conversation between Netanyahu and Palestinian leader Mahmoud Abbas, who condemned the attack and called for the site to be reopened. Jordan, a custodian of the sacred compound, also called for its immediate reopening. Netanyahu acted quickly to allay Muslim fears, saying that the status quo at the Muslim-administered site “will be preserved.”

Speaking before he left, PM Netanyahu said that he had spoken with the parents of the two police officers killed in Friday’s terror attack on Har HaBayis. “I sent them a hug from all the citizens of Israel, who are with them in their suffering,” PM Netanyahu said. The prime minister also stressed that Israel was not seeking to change the status quo on Har HaBayis. “We are placing cameras all along the edge of Har HaBayis, and they will give us visual control over nearly the entire compound and everything that goes on there. We will reopen Har HaBayis gradually, with additional security measures.”

Among those measures will be a requirement that Arabs ascending Har HaBayis pass through metal detectors. Until now, only Jews and foreign visitors were required to pass through these detectors. Har HaBayis and the Old City have been closed to Arabs since three terrorists killed two Israeli police officers – Ha’il Satawi, 30, of Majar, and Kamil Shanan, 22, of Kfar Hurfish – on Friday morning. The terrorists escaped and sought to take refuge in the mosques on Har HaBayis.

Police gave chase and eventually killed the terrorists – Muhammad Jabrin, 29; Muhammad Abd-Allatif Jabrin, 19; and Muhammad Ahmed Mafdel Jabrin, 19, all relatives from Umm el-Fahm – on Har HaBayis. Police evacuated and closed the site, searching for weapons or other items that may have been deposited there by terrorists. That search paid off; police sources said that several rifles and handguns were found, and may have been stored there in preparation for the terror attack.

Three members of the Muslim Waqf were arrested on suspicion of helping the terrorists. Also arrested were the parents of the three terrorists. Reports Motzoei Shabbos said that a senior member of Islamic Jihad was also arrested in connection with the attack.

In a statement, the Waqf said that it had “lost control” of Har HaBayis. The organization accused Israel of “breaking into the holy site” and termed the elimination of the terrorists Friday as “an attack on the Muslim nation and its history.”