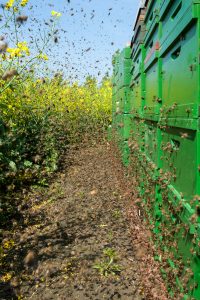 Officials say a New Jersey beekeeper and his wife were hospitalized after the man’s colony became aggressive and swarmed part of the town where the hive was located.

Ramsey Police Chief Bryan Gurney told The Record on Saturday it’s unclear what angered the colony, but he was concerned and planning to subdue or destroy the bees.

The town’s Office of Emergency Management warned people to stay clear of the area where the attack happened in Ramsey, a northern New Jersey town a short distance from the New York state line.

The beekeeper and his wife were taken to an area hospital but were not identified.

Srini Abbaraju, a New Jersey-based bee remover, told The Record it’s rare for managed colonies to attack and that they usually sting if disturbed.