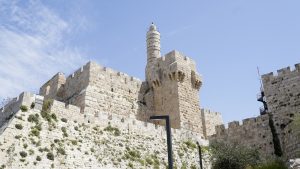 The Ministerial Law Committee has authorized the United Yerushalayim Law for a Knesset vote. This law will require the votes of 80 Knesset members in order to change the status of any part of the city. Education Minister Naftali Bennett, who sponsored the bill, expressed satisfaction at its approval, saying that “the danger to Yerushalayim has passed. Twice in recent memory — once by Ehud Barak and once by Ehud Olmert — the city was in great danger of being split. That is now over.”

Bennett attempted to bring the law for ministerial approval last month, but Prime Minister Binyamin Netanyahu intervened to prevent it from being presented to the committee. PM Netanyahu claimed at the time that the problem was not due to the bill’s contents, but because Bennett tried to push the bill through the committee without coalition approval. According to coalition agreements, any change in a Basic Law requires approval by the coalition, and as a similar Basic Law already exists, the new bill could be seen as an amendment to it.

With the bill now approved for Knesset legislation, Bennett said the law “will prevent any plans to divide Yerushalayim. Unity on the issue of a united Yerushalayim will strengthen our status there and prevent future pressure on Israel.”