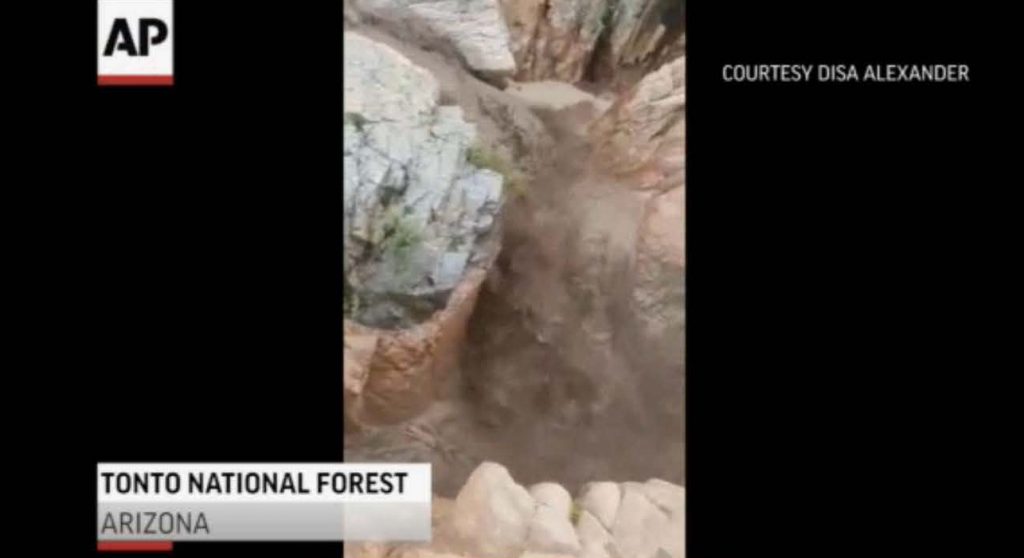 Nine people were killed and one is missing after floodwaters from a sudden rainstorm barreled through a normally tranquil swimming area in Tonto National Forest, where more than 100 people were taking refuge from summer heat, authorities said Sunday. Some of those washed downstream clung to trees until rescuers reached them.

The flash-flooding hit Saturday afternoon at Cold Springs canyon, about 100 miles northeast of Phoenix, and some people were washed several miles downstream.

Disa Alexander was hiking to the swimming area where Ellison Creek and East Verde River converge when the storm hit and the water suddenly surged. She was still about 2½ miles away when she came up a man holding a baby and clinging to a tree. His wife was nearby, also in a tree.

Alexander and others tried to reach them but couldn’t. Rescuers arrived a short time later.

“We were kind of looking at the water; it was really brown,” she said. “Literally 20 seconds later you just see like hundreds of gallons of water smacking down and debris and trees getting pulled in. It looked like a really big mudslide.”

The National Weather Service, which had issued a flash-flood warning, estimated that up to 1.5 inches of rain fell over the area in an hour. The thunderstorm hit about 8 miles upstream along Ellison Creek, which quickly flooded the narrow canyon where the swimmers were.

“They had no warning. They heard a roar, and it was on top of them,” Water Wheel Fire and Medical District Fire Chief Ron Sattelmaier said.

Three bodies were pulled out Saturday and six more Sunday. One person is still missing. Four people rescued by helicopter Saturday were taken to the hospital for hypothermia.

There had been thunderstorms throughout the area, but it wasn’t raining where the swimmers were at the time. But it happened during monsoon season, when strong storms suddenly appear thanks to the mixture of heat and moisture in the summer months.

“I wish there was a way from keeping people from getting in there during monsoon season. It happens every year. We’ve just been lucky something like this hasn’t been this tragic,” Sattelmaier said.

The flooding came after a severe thunderstorm pounded down on a nearby remote area that had been burned by a recent wildfire, Sattelmaier said.

The “burn scar” was one of the reasons that the weather service issued the flash-flood warning.

“If it’s an intense burn, it creates a glaze on the surface that just repels water,” said Darren McCollum, a meteorologist. “We had some concerns. We got a lot worse news.”