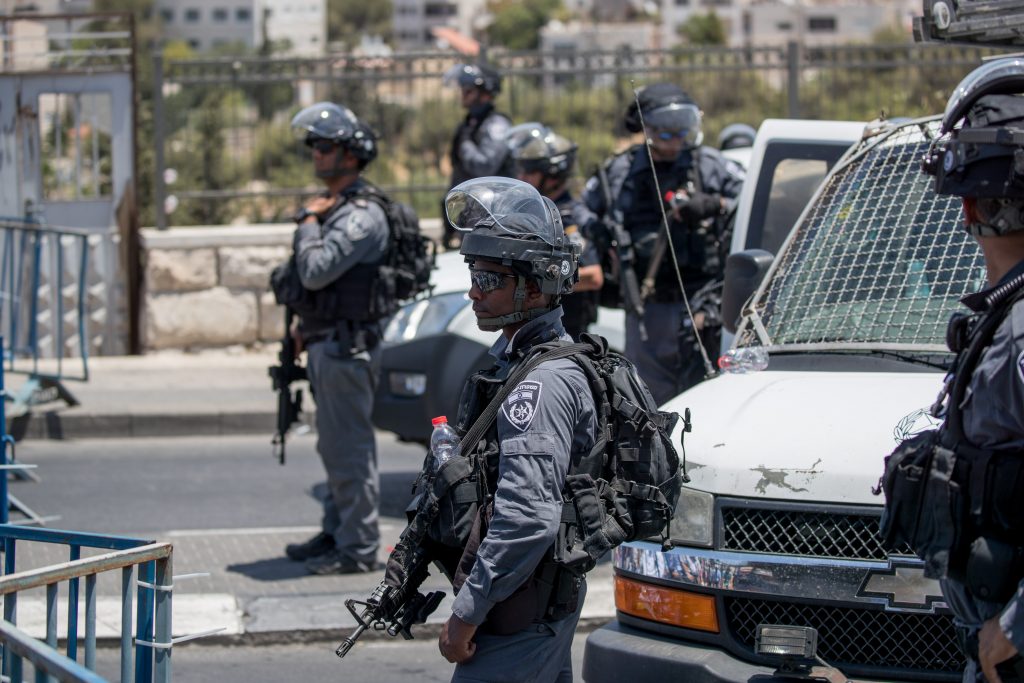 A day after the terror attack in the Old City that took the lives of two Israeli police officers, Har HaBayis remained closed, as police and security officials continued their investigation of the shooting attack in which police officers Ha’il Satawi, 30, of Majar, and Kamil Shanan, 22, of Kfar Hurfish, were killed by three Arab terrorists. The terrorists attacked the officers at the Lion’s Gate of Yerushalayim’s Old City, and then ran away and took refuge in the mosques on Har HaBayis.

Police gave chase and eventually killed the terrorists – Muhammad Jabrin, 29; Muhammad Abd-Allatif Jabrin, 19; and Muhammad Ahmed Mafdel Jabrin, 19; all relatives from Umm el-Fahm – on Har HaBayis. Police evacuated and closed the site, searching for weapons or other items that may have been deposited there by terrorists.

That search paid off; police sources said that several rifles and handguns were found, and may have been stored there in preparation for the terror attack. Three members of the Muslim Waqf were arrested on suspicion of helping the terrorists. Also arrested were the parents of the three terrorists. Reports Motzoei Shabbos said that a senior member of Islamic Jihad was also arrested in connection with the attack.

Despite agitation from Hamas, which throughout the day called for riots in the wake of the closure of Har HaBayis to Muslims – the first time since 1969 that Israel has taken such a step – the day passed relatively quietly in Yehudah and Shomron.

In a statement, the White House applauded Israel’s response to the events. “Yesterday, the Holy City of Jerusalem– which means ‘City of Peace’– became a scene of terror,” the White House said in a statement. “There must be zero tolerance for terrorism. It is incompatible with achieving peace and we must condemn it in the strongest terms, defeat it, and eradicate it.” Commenting on the closure, the White House added that Israel “has assured the world that it has no intention to alter the status of this holy site, a decision which the United States applauds and welcomes.”

If things remain calm, Har HaBayis will be reopened on Sunday afternoon, the security cabinet decided Motzoei Shabbos. Metal detectors will be set up at the entrances to the site and security cameras have been installed, despite the objections of the Waqf, the Palestinian Authority and Jordan.