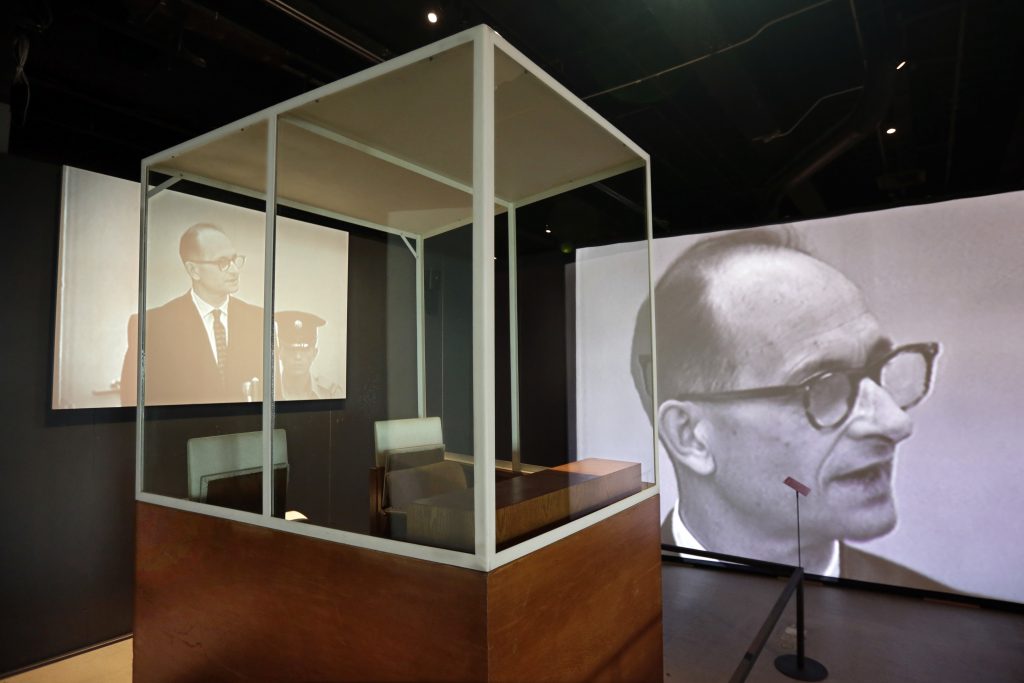 Half a century after Nazi war criminal Adolf Eichmann was convicted and hanged in Israel for engineering the deaths of millions of Jews, the bulletproof-glass booth where he sat facing justice has come to New York for a multimedia, you-are-there recreation of the courtroom.

It’s part of an exhibit at Manhattan’s Museum of Jewish Heritage that opens Sunday, created by a former agent of Israel’s Mossad intelligence service that captured Eichmann a decade after he fled to Argentina.

Surrounding Eichmann’s actual booth are screens with original video footage — seven minutes culled from 350 courtroom hours — that makes visitors feel like they’re spectators at the 1961 proceedings. They hear the voices of survivors who testified against the SS lieutenant-colonel, as well as the prosecutor and the defense attorney.

The balding, 55-year-old German who once planned the routes of cattle-car trains that brought Jews to Auschwitz, Bergen-Belsen, Dachau and other camps sits stone-faced in footage rolling on a screen right behind the original booth. To the right is another screen beaming the traumatic, tear-drenched testimonies, with one man collapsing to the floor in exhaustion after he speaks.

“Here with me stand 6 million prosecutors,” chief prosecutor Gideon Hausner intones in Hebrew, with a subtitled English translation. “Their blood cries to heaven, but their voices cannot be heard.”

The trial was held in a Yerushalayim theater converted into a courtroom — an appropriate setting for the last act of what unfolds like a sensational cloak-and-dagger story, starring the organizer of Hitler’s “Final Solution.”

The details drew Avner Avraham, who left the Mossad two years ago to collect materials for the exhibit, which takes its title “Operation Finale” from the code name of the undercover Eichmann mission led by Israel’s still-budding intelligence force in the 1950s. Its agents fanned out across Europe and Argentina, assembling the pieces of a puzzle that ended with Eichmann’s hanging.

Avraham said the proof they had the right man came down to his left ear.

Eichmann was abducted by the Mossad in 1960 as he got off a bus while heading home from work at a Mercedes-Benz plant in Buenos Aires. They confirmed it was him by comparing his ear to a photo of Eichmann in a pre-World War II German army file.

In 1957, Avraham said, Israeli Prime Minister David Ben-Gurion “ordered the Mossad: ‘I want you to bring one big imported Nazi for one big, huge trial — a live Nazi.'”

Eichmann was drugged for the trip to the airport “because he could start screaming, saying, ‘Hey, they take me to Israel. I’m an Argentinian citizen!'” the former Mossad agent said. “I mean, today, you cannot get to the plane with a small bottle of perfume, so you want to bring a Nazi?”

Once in Israel, Avraham said, authorities had Eichmann under constant medical watch and made sure he was well-fed so he could stay healthy for the trial.

Characters who populate the 4,000-square-foot exhibit include cardboard figures of the 11 key Mossad agents, including one woman, who closed in on Eichmann after tracking him for months. He was taken to Israel aboard an El Al plane, camouflaged as a cabin attendant in the airline uniform.