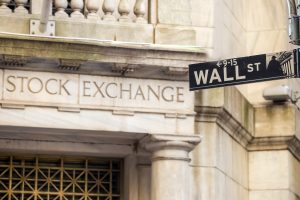 U.S. stocks are up slightly in midday trading, led by more gains in technology and health-care companies. High-dividend stocks like real-estate companies and utilities are posting big gains following a drop in bond yields. The lower yields and a weak forecast from JPMorgan Chase are weighing on bank stocks.

ECONOMIC SNAPSHOTS: Investors were also weighing data on retail sales and inflation at the consumer level Friday. The Commerce Department said retail sales fell 0.2 percent in June as Americans curtailed spending at restaurants, department stores and gas stations. That followed a 0.1-percent drop in May. Meanwhile, the Labor Department said U.S. consumer prices were flat in June, the latest evidence that inflation remains muted. All told, inflation has climbed 1.6 percent from a year ago.

The market rallied on Wednesday after Federal Reserve Chair Janet Yellen hinted that the Fed could slow its rate-hike plans if inflation continues to run below the Fed’s 2-percent target.

THE QUOTE: “The market is not up that much today, but it’s probably a reaction to the weak inflationary numbers, meaning that the Fed is not going to get too aggressive on rate hikes,” said Lindsey Bell, investment strategist at CFRA Research.

QUARTERLY RESULTS: Several big banks kicked off the second-quarter earnings season. Among them were JPMorgan Chase, Citigroup and Wells Fargo, each of which posted results that beat Wall Street’s expectations. But it wasn’t all good news. JPMorgan, the nation’s largest bank by assets, said it expects weaker net interest income. Falling bond yields also weighed on the sector. When bond yields decline, it forces interest rates on loans lower, which makes it harder for banks to make money from lending. JPMorgan fell $1.40, or 1.5 percent, to $91.70, while Citigroup slid 77 cents, or 1.1 percent, to $66.25. Wells Fargo lost $1.05, or 1.9 percent, to $54.55.

RETAILERS REBOUND: Despite the June decline in retail sales, investors were bidding up shares in several retail chains after some analysts upgraded the sector a day after Target raised its second-quarter forecasts and said sales and customer traffic increased. Ulta Beauty climbed $4.99, or 1.9 percent, to $262.39, while Gap rose 50 cents, or 2.2 percent, to $23.28. Best Buy added 99 cents, or 1.8 percent, to $55.65.

GREENBACK SLIDE: The dollar was down to 112.67 yen from 113.23 yen late Thursday. The ICE U.S. Dollar Index, which compares the dollar against a basket of major currencies, slid to its lowest level since September. The U.S. currency also weakened against the euro, which rose to $1.1452 from $1.1406.

MARKETS OVERSEAS: In Europe, Germany’s DAX was down 0.1 percent, while the CAC 40 in France was flat. The FTSE 100 index of leading British shares was down 0.5 percent. In Asia, Japan’s Nikkei 225 added 0.1 percent and South Korea’s Kospi rose 0.2 percent. Hong Kong’s Hang Seng index inched up 0.2 percent.