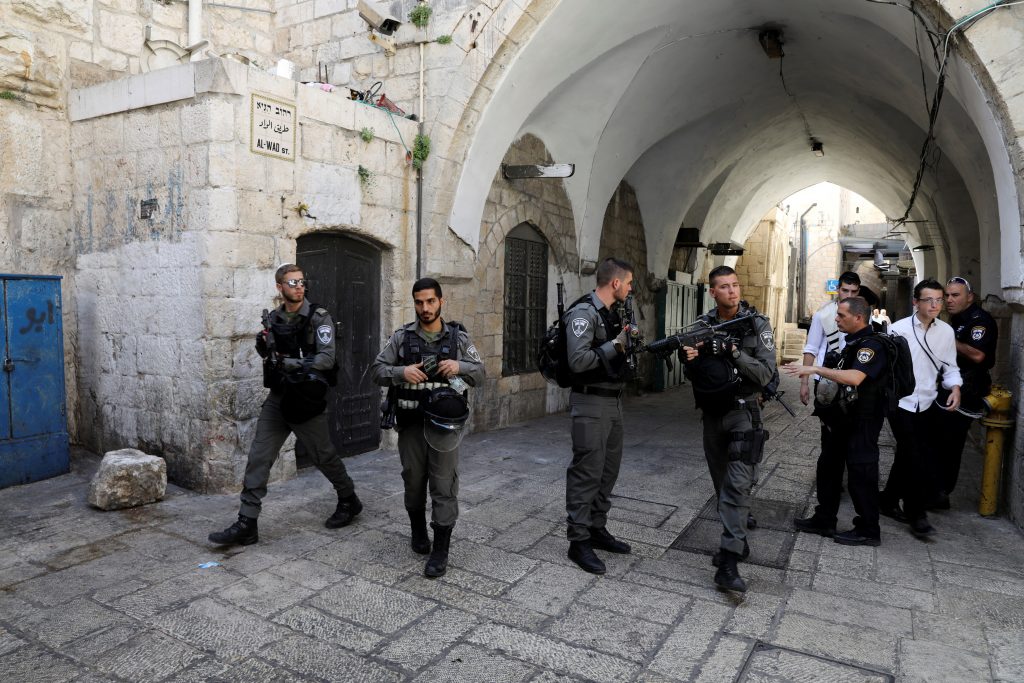 Two Israeli police officers were killed Friday, and a third suffered light injuries, in a shooting attack that began at the Lion’s Gate (Shaar Ha’arayot) of Yerushalayim’s Old City. Terrorists opened fired and hit the officers just after 7 a.m. local time, and fled through the Old City to Har HaBayis, where they attempted to hide in the mosques located there. Security forces pursued them, and shot them to death on Har HaBayis.

The slain police officers were members of Israel’s Druze community: Ha’il Satawi, 30, of Majar, and Kamil Shanan, 22, of Kfar Hurfish.

Police removed the bodies of the terrorists and evacuated Har HaBayis, and also closed off most entrances to the Old City. The terrorists were carrying a number of weapons, including rifles and handguns.

Public Security Minister Gilad Erdan arrived on the scene shortly after the attacks. The terrorists, he said, “have crossed a red line. This is a serious attack. It is still under investigation, and will require new security arrangements on Har HaBayis and its surrounding areas.”

Further details of the attack emerged, along with footage taken by witnesses of the shooting attack. The footage shows the terrorists taking cover behind a column of one of the mosques on Har HaBayis. One of the terrorists who was shot and was apparently neutralized is seen getting up when the attention of security forces shifted to another terrorist; he was shot again moments later.

Police spokeswoman Luba al-Samri said that the terrorists were carrying two Carlo submachine guns, a handgun, and a knife.

“This is a difficult day for the Israel Police,” Police Commissioner Roni Alsheich told reporters as he oversaw operations. “We have two dead officers.”

Alsheich described the attack as “extraordinary and extreme.”

“A shooting on Har HaBayis is an event that is serious, sensitive and significant diplomatically and internationally,” he said.

Police are probing how the terrorists were able to approach the Old City with weapons. Heavy security is in place in the area, particularly on Fridays, and young Palestinian men are frequently stopped and checked by police.

Commenting on the attack, U.S. Ambassador to Israel David Friedman said that he was “shocked and horrified by the despicable attack today in Jerusalem. Terrorism must be condemned by all and defeated.”

Prime Minister Binyamin Netanyahu consulted with security officials and received an update on the situation. The decision to close Har HaBayis for at least Friday was taken after the consultations. No prayers were held at Har Har HaBayis on Friday morning while officials conduct an investigation and check if there are more arms at the site. Access to the Old City is limited; on Friday morning, the Jaffa and Damasus Gates remained closed, but officials said they could be opened later in the day.

The IDF was preparing to deal with rioting and unrest in Arab villages in Yehudah and Shomron and among Israeli Arabs, as officials announced the identity of the three terrorists. The three are residents of the Israeli Arab town of Umm el-Fahm.

Police identified the three as Muhammad Jabrin, 29; Muhammad Abd-Allatif Jabrin, 19; and Muhammad Ahmed Mafdel Jabrin, 19; all relatives from Umm el-Fahm. Security officials said they did not have histories of security violations. According to reports, police and security officials have surrounded the neighborhood where the three live and plan to question family members. A gag order has been placed on many details of the incident.

No terror group has yet taken responsibility for the attack, but Hamas said in a statement that the attack was “the natural reaction to Israeli terror and the contamination of the Al-Aqsa Mosque. This attack represents the continuation of the intifada and the resistance.”

Although Israeli security officials released their names close to noon on Friday, their identities were known several hours earlier. Hamas had earlier published photos of the three on Har HaBayis, preparing to carry out the attack. In addition, they uploaded a photo to social media, in which they were seen celebrating their exploit before it took place.

A number of shooting attacks have taken place in the area of Shaar Shechem in recent years, although shooting attacks inside the Old City have declined considerably, according to Israeli security officials.