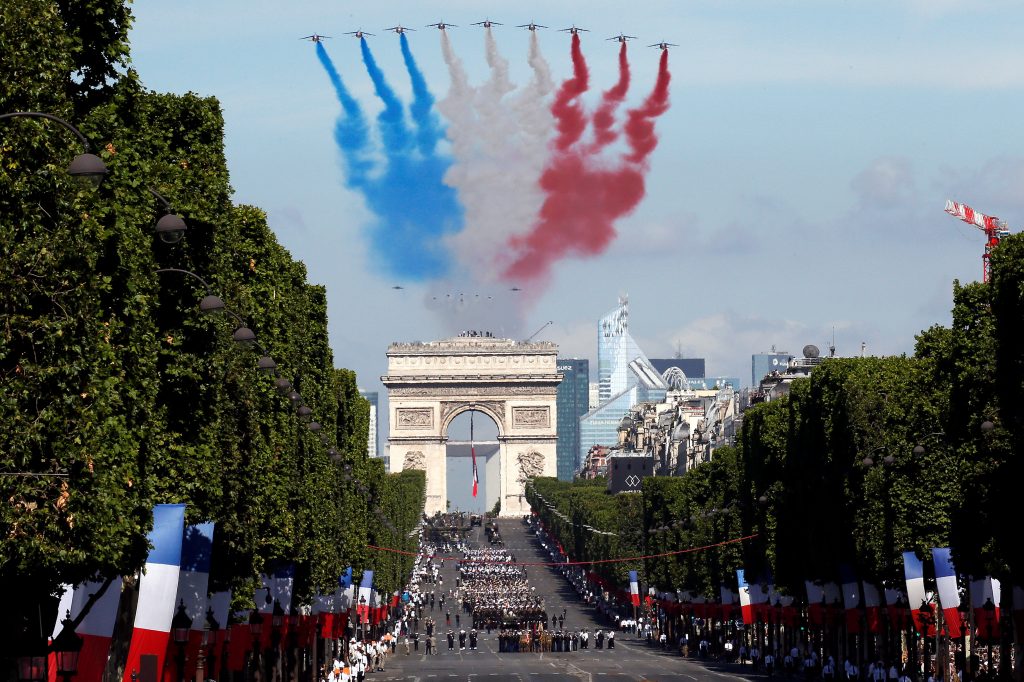 With a gilded tour of one of France’s most storied monuments and a military parade bristling with weapons, French President Emmanuel Macron is positioning himself as the indispensable intermediary between Europe and Donald Trump.

Macron made a point of detailing both the long history of ties between France and America and the areas where he and Trump disagree as he hosted the U.S. president for a Bastille Day visit. But he made clear it was in the spirit of bluntness with a friend and ally, even offering a conspiratorial wink during a press conference featuring the two men.

The joint appearance was part of a two-day visit that featured a personal tour of the golden-domed Invalides monument and a private dinner high in the Eiffel Tower. To top it off, President Trump participated in the military parade on Friday, where Macron invited him as the guest of honor to commemorate the 100th anniversary of the U.S. entry into World War I.

The Parisian glitz was not lost on President Trump, who has used the French city as a cautionary tale, notably by citing a friend he calls Jim, who believes that “Paris isn’t Paris any longer” because of the blight of Islamic extremism.

Asked about Jim’s criticisms Thursday, President Trump deflected the question and said Paris was “going to be just fine,” because France now has a “great” and “tough” president.

At the first Macron-Trump encounter, in May, the two shared a white-knuckle handshake that the French president said was intended to show he was no pushover.

Both seemed to work to put that tense debut behind them and minimize differences, said Spencer Boyer, former national intelligence officer for Europe and a senior fellow at the Brookings Institution.

“President Macron was highly skilled at putting President Trump at ease and avoiding any land mines that would have derailed the show of unity,” Boyer said. “Macron was especially adept at sidestepping questions about U.S. political controversies, which Trump clearly appreciated.”

Although Thursday’s gilded welcome may have taken some of the sting out of their first encounter, Macron’s amiable meeting with German Chancellor Angela Merkel earlier in the day showed the balance Macron appears to be striking.

With Chancellor Merkel, he emphasized their agreement on nearly every issue as well as their joint development of a fighter jet.

The German leader said there was no getting around interdependence in the 21st century. “Europe alone cannot win the war on terrorism,” Merkel said.

“There is no divergence between France and Germany in the manner of treating President Trump,” Macron added.

Still, the German chancellor, who was less than a block from the U.S. Embassy when President Trump was ensconced inside, left the presidential palace before she and the president could cross paths.

Trump left open the possibility that he would reconsider his decision to pull the U.S. out of the Paris climate accord — the main source of disagreement with European Union governments. But he said if it doesn’t happen, “that will be OK too.”

President Macron’s ability to firmly acknowledge his differences with President Trump are part of modern French tradition. His invitation to Trump was “a way of illustrating the history of France and America, allied but not aligned,” said Thomas Gomart, director of the French Institute for International Relations.

After the joint briefing, the two leaders headed to the Eiffel Tower meal, which Macron described as “a dinner among friends.”