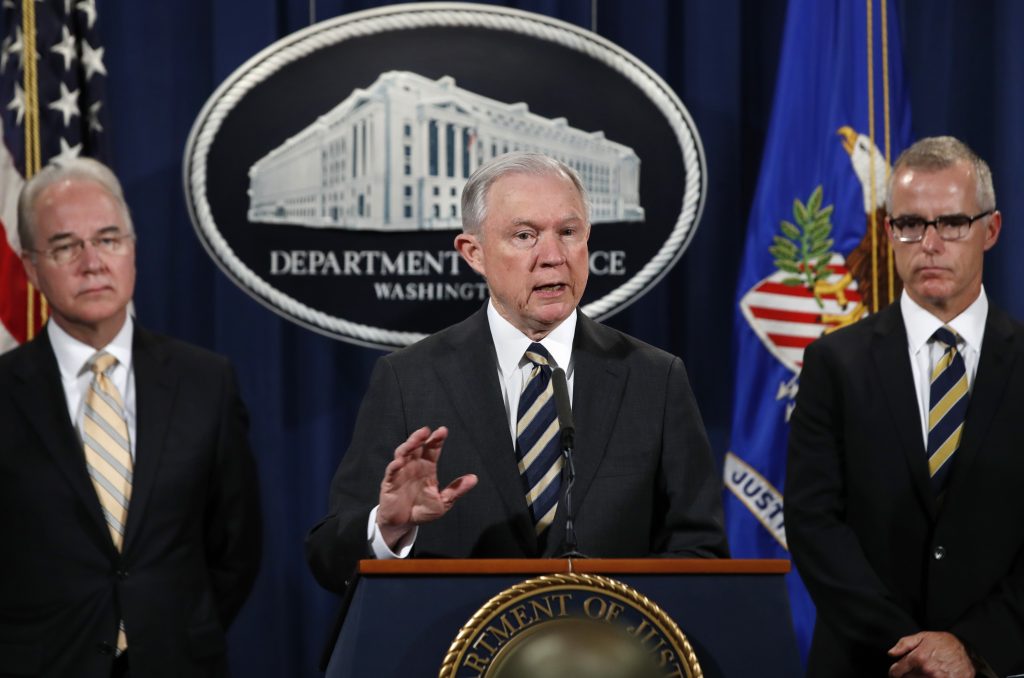 Sessions called the collective action the “largest health care fraud takedown operation in American history” and said it indicates that some doctors, nurses and pharmacists “have chosen to violate their oaths and put greed ahead of their patients.”

Among those charged are six Michigan doctors accused of a scheme to prescribe unnecessary opioids. A Florida rehab facility is alleged to have recruited addicts with gift cards leading to $58 million in false treatments and tests.

Officials said those charged in the schemes include more than 120 people involved in illegally prescribing and distributing narcotic painkillers. Such prescription opioids are behind the deadliest drug overdose epidemic in U.S. history. More than 52,000 Americans died of overdoses in 2015 — a record — and experts believe the numbers have continued to rise.

“In some cases, we had addicts packed into standing-room-only waiting rooms waiting for these prescriptions,” acting FBI director Andrew McCabe said. “They are a death sentence, plain and simple.”

“They seem oblivious to the disastrous consequences of their greed. Their actions not only enrich themselves, often at the expense of taxpayers, but also feed addictions and cause addictions to start,” Sessions said.

Health care fraud sweeps like Thursday’s happen each year across the country, but law enforcement officials continue to grapple over the best way to fight the problem.

The people charged were illegally billing Medicare, Medicaid and the health insurance program that serves members of the armed forces retired service members and their families, the Justice Department said. The allegations include claims that those charged billed the programs for unnecessary drugs that were never purchased or given to the patients.