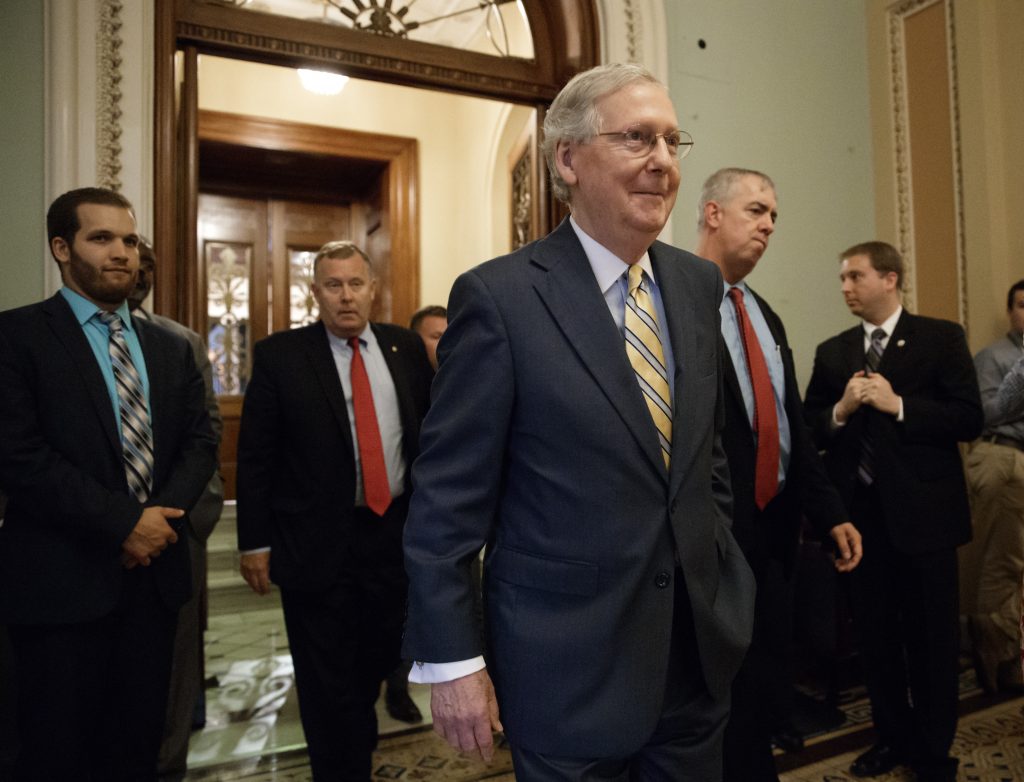 Senate Republican leaders released on Thursday a revised plan to dismantle Obamacare, playing to the party’s disparate factions by letting insurers sell cheap, bare-bones policies while retaining taxes on the wealthy. But quick criticism showed that the proposed bill is already in jeopardy.

With Democrats united against it, McConnell cannot afford to lose more than two Republican senators to win passage. But moderate Susan Collins and conservative Rand Paul voiced opposition to even bringing the new plan up for debate.

Several senators said they had concerns about the legislation, particularly its Medicaid cuts. And two other Republican senators, Lindsey Graham and Bill Cassidy, complicated matters by announcing an alternative plan.

McConnell, a skillful tactician who was forced two weeks ago to scrub a planned vote on an earlier version opposed by both moderates and hardline conservatives in his party, has planned for a vote on the retooled bill next week.

“The American people deserve better than the pain of Obamacare. They deserve better care. And the time to deliver that to them is next week,” McConnell said.

The measure represents a retreat from long-standing Republican aspirations to dump Obamacare-related taxes, retaining a 3.8-percent tax on net investment income for individuals earning more than $200,000 and couples earning more than $250,000, and a 0.9-percent surtax for the Medicare insurance program for the elderly on people with those incomes. It also keeps Obamacare’s limits on corporate-tax deductions for executive pay in the health-insurance industry.

This provision – authored by Sen. Ted Cruz – to allow the stripped-down plans was included in the proposed bill  to try to help win over holdout conservatives.

Insurer groups, including the national Blue Cross Blue Shield Association, have derided these “skinny plans,” saying they would raise insurance premiums, destabilize the individual insurance market and undermine protections for pre-existing medical conditions. Moderate senators could balk at the provision for the same reasons.

The new bill provides an additional $70 billion to help stabilize the individual insurance market on top of the $112 billion in the original bill to help insurers slow growth in premium costs and help lower-income insurance holders cover out-of-pocket medical expenses.

The move by Graham and Cassidy to debut their own health-care proposal in a joint interview on CNN moments before McConnell was set to brief members on the new bill demonstrated how divided the majority remains in its quest to overhaul Obamacare.

In their CNN interview, Graham and Cassidy said that they would take the billions of dollars the federal government now receives in taxes under Obamacare and direct that revenue to the states.

“Our problem has been trying to combine tax reform with replacement of Obamacare,” said Cassidy. “We’re giving the money back to the states. The states can do what they want to do. A blue state can do a blue thing; a red state can do a red thing.”

The bill unveiled by McConnell Thursday retains the previous proposal’s phase-out of the Obamacare expansion of Medicaid.

Moderate Republicans were spurned in their desire to see a reduction in Medicaid cuts in the revised version.

Critics said that despite some changes to coax wavering senators, the revised bill’s core remains unchanged: making cuts to Medicaid, causing millions to lose insurance and driving up health-care costs for millions of people.

Hospital and insurer groups have spoken out against the Senate Republican approach, particularly proposed Medicaid cuts. The cuts would result in lower revenues for hospital companies and Medicaid insurance specialists.

Molina Healthcare, which has more than a million customers on the Obamacare individual exchanges and manages Medicaid health programs, said that as a result of the proposed changes in the individual market, insurers would compete for the least-risky customers, making plans for sick people unaffordable and destabilizing markets.

The American Hospital Association said the new version of the bill retained the “unacceptable flaws” of the previous version.

“Instead of merely putting forth an update, we again call on the Senate to put forth an upgrade,” Rick Pollack, president of the association, said in a statement.

Health-care stocks were mostly unmoved by the announcement, as Wall Street analysts described the core of the revised bill as largely unchanged from the earlier one.

The new bill includes another $45 billion for fighting the opioid-addiction epidemic that has hit large parts of the nation, on top of the $2 billion in the earlier version.

The new bill would still repeal certain Obamacare taxes aside from the taxes on the wealthy, end a penalty on individuals who do not obtain insurance and overhaul Obamacare subsidies to help people buy insurance with tax credits.

The nonpartisan Congressional Budget Office, which forecast that the previous version would have increased the number of Americans without health insurance by 22 million by 2026, is due to evaluate the new bill in the coming days.

Repealing and replacing Obamacare was a top campaign promise for President Donald Trump, who was monitoring the Senate developments during his visit to France.

“I’d say the only thing more difficult than peace between Israel and the Palestinians is health care,” Trump told reporters on his flight to France.

The House of Representatives passed its own health-care bill on May 4.

Republicans have a 52-48 Senate majority, with Vice President Mike Pence able to cast a potential tie-breaking vote. Any bill passed by the Senate would have to go back to the House for approval.