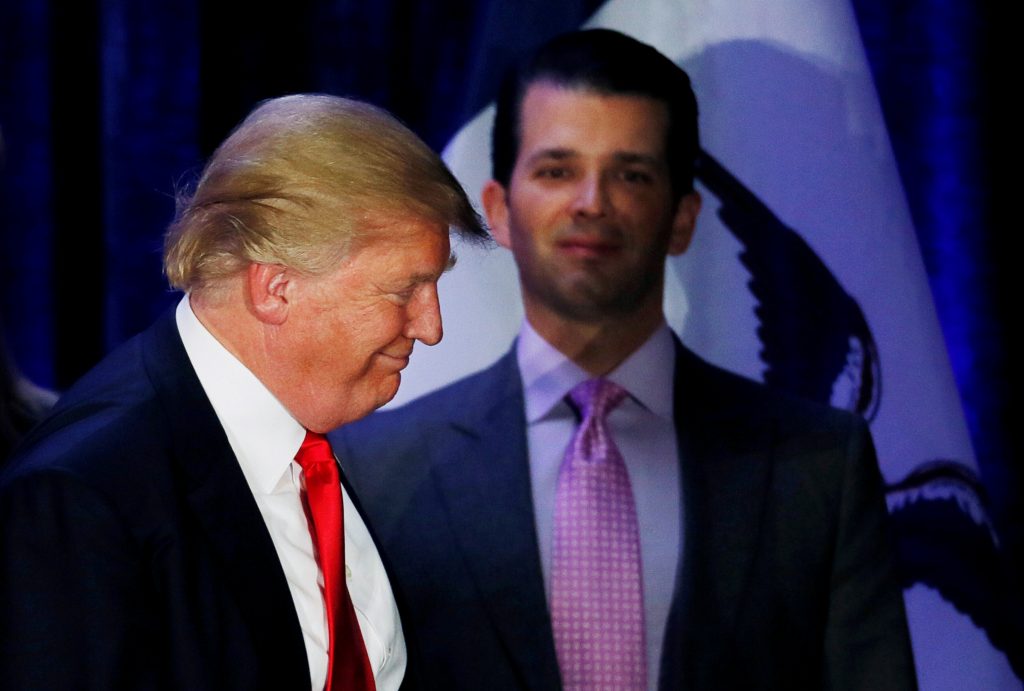 President Donald Trump said on Wednesday he did not fault his son Donald Trump Jr. for meeting with a Russian lawyer during the 2016 presidential election campaign and that he was unaware of the meeting until a few days ago.

Asked if he knew that his son was meeting with lawyer Natalia Veselnitskaya in June last year, the president told Reuters in a White House interview, “No, that I didn’t know until a couple of days ago when I heard about this.”

Trump Jr. eagerly agreed to meet the woman he was told was a Russian government lawyer who might have damaging information about Democratic rival Hillary Clinton as part of Moscow’s official support for his father’s campaign, according to emails the son released on Tuesday.

Seated at his Oval Office desk, President Trump said he did not fault his son for holding the meeting, writing it off as a decision made in the heat of an upstart, non-traditional campaign.

“I think many people would have held that meeting,” President Trump said.

“It was a 20-minute meeting, I guess, from what I’m hearing,” President Trump said. “Many people, and many political pros, said everybody would do that.”

The emails were the most concrete evidence that Trump campaign officials might have been willing to accept Russian help to win the Nov. 8 election, a subject that has cast a cloud over President Trump’s presidency and prompted investigations by the U.S. Justice Department and Congress.

Donald Trump Jr., in an interview with Fox News on Tuesday, said, “In retrospect, I probably would have done things a little differently.”

In the White House interview, the president said he directly asked Russian President Vladimir Putin if he was involved in what U.S. intelligence says was Russian meddling in the presidential campaign and that Putin had insisted he was not.

President Trump said he spent the first 20 or 25 minutes of his more than two-hour meeting with Putin last Friday in Germany on the election meddling subject.

“I said, ‘Did you do it?’ And he said, ‘No, I did not. Absolutely not.’ I then asked him a second time in a totally different way. He said absolutely not,” President Trump said.

About Putin, he added: “Somebody did say if he did do it, you wouldn’t have found out about it. Which is a very interesting point.”

While U.S. intelligence agencies and even members of Trump’s Cabinet have said Russia meddled in the election, President Trump has wavered on the subject, at times suggesting that other actors might have been involved.

President Trump equivocated on whether he felt he could trust Putin. He said Putin and Chinese President Xi Jinping both look out for their countries’ interests, as he looks out for U.S. interests.

“I am not a person who goes around trusting lots of people. But he’s the leader of Russia. It is the second most powerful nuclear power on earth. I am the leader of the United States. I love my country. He loves his country,” President Trump said.

As in the past, President Trump said there was no collusion between his campaign and Russia.

“There was zero coordination. It’s the dumbest thing I’ve ever heard,” he said.

The president said Democrats had used the accusations to justify Clinton’s loss in November, saying, “The White House is functioning beautifully despite the hoax made up by the Democrats.”

Although he and Putin were able to forge a ceasefire agreement in part of Syria, President Trump said their interests collided over other issues. He said his U.S. military buildup and drive to increase U.S. energy production were in direct conflict with Putin, whose nation is dependent on energy exports.

Their differences made him wonder whether Putin really had supported him last year, as many news reports have suggested.

“It’s really the one question I wish I would have asked Putin: Were you actually supporting me?”