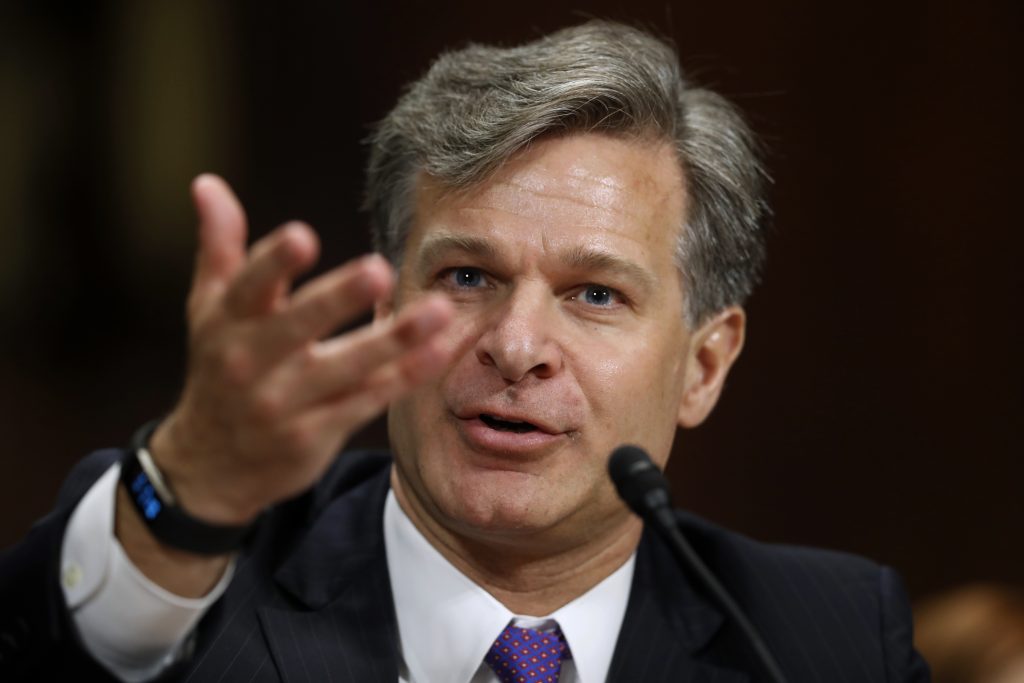 President Donald Trump’s pick to lead the FBI declared Wednesday he will not let politics get in the way of the bureau’s mission, saying its work will be driven only by “the facts, the law and the impartial pursuit of justice.”

Christopher Wray, a former Justice Department official selected for the job last month after Trump’s firing of James Comey, appeared before the Senate Judiciary Committee in a hearing focusing in part on the political tumult surrounding his nomination and the ongoing investigations shadowing the White House.

Asserting his independence, Wray said, “My loyalty is to the Constitution and the rule of law. They have been my guideposts throughout my career, and I will continue to adhere to them no matter the test.”

He later vowed to lead the FBI “without regard to any partisan political influence” and said he would consider unacceptable any efforts to interfere with an investigation by Special Counsel Robert Mueller, himself a former FBI director, into whether the Trump campaign coordinated with Russia during last year’s presidential campaign.

After Pres. Trump dismissed Comey on May 9, the ex-FBI director said that the president had asked him to pledge his loyalty during a dinner at the White House months earlier. He also said Trump had encouraged him to end an investigation into the former national security adviser, Michael Flynn.

Wray, 50, would inherit the nation’s top law enforcement agency at a particularly challenging time, given the abrupt dismissal of Comey by a president who has appeared insensitive to the bright-line boundary between the White House and the FBI.

“Will Mr. Wray and the FBI pursue investigations with independence and vigor, regardless of who may be implicated? Will he stand up for what is right and lawful?” Sen. Dianne Feinstein of California, the committee’s top Democrat, said in her opening statement.

Wray’s lengthy legal career included a stint as a top Justice Department official in the Bush administration and white collar work at an international law firm with several major corporations and banks as clients. He served the government at a time when harsh interrogation techniques were approved within the Justice Department for terror suspects captured overseas, though Wray said he was never involved in signing off on those methods.

Though Trump as a candidate professed support for waterboarding, Wray said he considered torture to be wrong and ineffective. “The FBI is going to play no part in the use of any techniques of that sort.”

Wray was announced as the nominee in a curt, early morning tweet by Trump, and without the pageantry of a Rose Garden ceremony. So the hearing offered the first public, close-up look at him and his background.

Those close to him say he’s the right man for the job. Attorneys and FBI agents who have worked with Wray describe him as a steady hand, dedicated and low-key, seemingly impervious to political influence.

An association representing the majority of FBI agents on Monday voiced its support for Wray, saying “he understands the nature of investigative work and the centrality of special agents to the mission of the FBI.”

Bill Mateja, a Dallas attorney who worked with Wray in the Justice Department, said “he has a great moral compass and he’s no one’s minion.”

Wray also faced questions about his relationships with Comey and Mueller. Trump allies have said Mueller’s closeness to Comey shows he can’t lead an unbiased probe. But Trump nominated Wray despite his having worked with both men in the Justice Department.

Wray was at the department in 2004 when Comey, then the deputy attorney general, was prepared to resign during a dispute with the White House over the reauthorization of a domestic surveillance program. Wray stopped Comey in the hallway one night amid resignation rumors with a particular request, according to the 2011 book, “The Threat Matrix.”

“Look, I don’t know what’s going on, but before you guys all pull the rip cords, please give me a heads-up so I can jump with you,” Wray is quoted as saying.

Those who know him say that unlike the outspoken Comey, Wray would be a more reserved leader. His reserve could bode well for the agency at a time when its work has been thrust into the center of a political maelstrom.

He has deep experience in Washington, having served as head of the Justice Department’s criminal division in the Bush administration, a position that had him overseeing major criminal prosecutions — such as the special task force investigating the Enron collapse — and also developing the U.S. government’s legal response to terrorism and national security threats.

Over the past decade, he has worked in private practice at King & Spalding in Atlanta, where he’s defended large corporations and financial institutions in criminal and civil cases.

He provided legal services to Johnson & Johnson, Wells Fargo and Credit Suisse, among other big-name clients, according to ethics documents released Monday. If confirmed, he’ll have to step aside for a year from matters involving those clients and the law firm. He also assisted New Jersey Gov. Chris Christie during the so-called Bridgegate scandal.

“Chris is a Republican but he doesn’t wear his politics on his sleeve. He keeps things close to his vest,” Mateja said in a statement. “The public can rest easy that Chris will not be a lackey for Trump.”