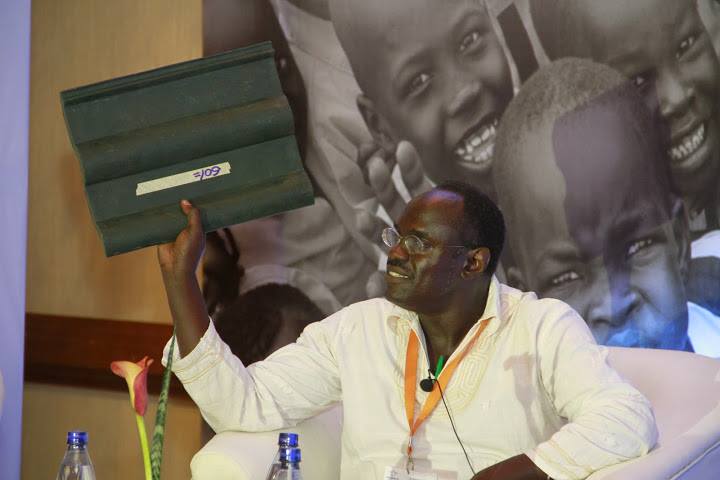 Saving trees with plastic waste doesn’t sound like the most plausible proposition, but a man by the name of Aghan Oscar of Nairobi, Kenya — according to a GoodNewsNetwork, January 5 report — did just that. Tired of seeing trash continuously piling up on the beaches of his city, Oscar developed an ingenious idea of how to recycle plastic waste and save trees at the same time. Continental Renewable Energy (COREC), a small-size recycling company founded by Oscar, collects plastic garbage and reuses it in the form of road signs and poles.

It turns out that Oscar’s signs are more durable and less costly to produce than signs and poles made out of metal and wood. Aside from the fact that wooden poles tend to deteriorate at too fast a rate, there is also a lot of theft — particularly in impoverished areas — of the metal in the road signs, which thieves profit from by reselling them to businesses that manufacture items out of metal.

Having already bought more than 28,000 road signs from Oscar, the Kenyan government has saved a very significant amount of money on the project. And, of course, far fewer trees are being cut down since the wood is no longer necessary to hold up the signs. “For every 10 poles fashioned from recycled plastic,” Oscar enthuses, “one tree is saved!”

One more side benefit that emerged from Oscar’s pet project is the provision of gainful employment to a large number of Nairobi youth. Oscar has roughly 250 young people who work for him by collecting the plastic waste as well as working on the assembly line.

So, there you have it — saving trees with plastic waste. Talk about one’s man trash is another man’s treasure!

There’s a great mashal that perfectly encapsulates, I believe, a powerful point that can be culled from this otherwise somewhat odd item.

A poor dove was sullenly walking around, badly weighed down by the bulk of the two large appendages on either side of her body. Unaware of their function, the dove was simply miserable over the fact that they made life so hard for her — until, one day, a wise man spied the dove lumbering about and asked her what’s the matter.

“What’s the matter?” the dove responded. “Don’t you see these two ungainly masses that make mobility so difficult for me?”

“Ungainly masses?” the wise man exclaimed. “Why, those are your wings! Spread your wings, oh lucky dove, and soar through the heavens!”

What appeared to be the problem was, in fact, the perfect solution.

Of course, not every problem can be solved in such a creative “Let’s-make-road-signs-out-of-plastic-waste” type of way. But it certainly is mind-expanding and vistas-expanding to incorporate such a viewpoint into life. Instead of thinking solely in terms of “How can I rid myself of this nuisance?” one can also consider “Is there perhaps any way that I can turn this problem into an asset?”

Chazal tell us that the reason Hashem at first withheld offspring from the Avos is because Hashem is “Misaveh l’tefillasam shel tzaddikim — He desires the prayers of the tzaddikim.” It goes without saying that — even before they were focusing on the need to have children — the Avos Hakedoshim davened with a perfection of kavanah that we cannot even conceptualize.

It is told about the Rebbe Reb Zusha of Anipoli that he once entreated the Ribbono shel Olam to experience the yiras Shamayim of the Rambam, if but for a few minutes. He was granted his request, and the intensity of it left him completely incapacitated! If that is true when jumping from the Rebbe Reb Zusha to the Rambam, how much more so when it comes to contrasting ourselves with the Avos! Without a doubt, the Avos’ tefillos were of an incredibly sublime quality even before they faced barrenness. On their level, though, there was yet an even higher level of dveikus baHashem that could be reached through facing the challenge of childlessness. Chazal’s statement makes it equally clear that the Avos indeed rose to this challenge. They utilized the challenge of infertility to accomplish a level of greatness that would have been otherwise beyond their reach.

When facing a difficulty — litter, infertility, or otherwise — it is natural and completely understandable to view it as a distressing problem of which we simply want to rid ourselves. From that vantage point, tefillah can serve as one tool among many that we can employ to efficiently alleviate our suffering. Again, there is nothing wrong with that per se, and it is only natural and completely understandable to look at the situation that way. However, it is valuable to be aware of the fact that there is another option, an option of looking at the problem and asking ourselves, “Is there any way that I can transform this liability into an asset?” When looking at things in that way, problems can themselves become solutions.