Every Jew Is Precious 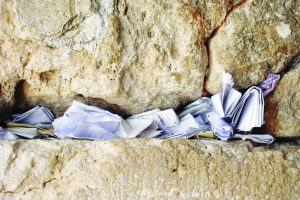 I love going to the Kosel at midnight, when the rest of the city is quietly ending the day. The echoes of Nishmas Kol Chai fill the plaza with restrained joy and longing. I also love being there at the crack of dawn, deep inside the tunnels, listening to the minyan of Kabbalists. Of course, Friday afternoon is special, as is Friday night. The very best are Monday and Thursday mornings watching bar mitzvah after bar mitzvah. The entire spectrum of “Us” is there — from Americans who are making this moment the most intensely Jewish one of their sons’ lives, to ululating Sephardic mamas shepping nachas from their boys- turned-into-men, to stately Ethiopians in white robes standing next to their Israeli-raised children, watching their sabra grandchildren read from the Torah. I was there two years ago watching my son Baruch stand beside his Raphael as he flawlessly (well, I am a grandma!) did justice to the kriah. The pictures we took! The tears that escaped from our eyes! I couldn’t be quite this way any other place in the world.

If someone were to ask you, “What is the Kosel?” would you say that it is a retaining wall of the Second Temple, and leave it at that? While that answer may be accurate, it is far from being true in the most genuine sense of the word. The Kosel is the holiest place in the world, the place where all reality is mystically joined with its Source. It’s the place of our dreams for a future in which Hashem promised that, “My House shall be called a House for all nations.” It’s all of this and much more. If there is any place in the world that our identity as a people finds an address, this is the place.

One of the most moving moments I ever had at the Kosel was on a weekday afternoon. A small group of tourists was standing and looking at the ancient stones. One of them was a girl of about 15. She wanted to say something, but the words just didn’t flow. She fell back on the Hebrew words that she remembered best, and began reciting the parashah of her bat mitzvah. She probably had little idea of what she was saying; the Hebrew was clearly unfamiliar, and the census at the beginning of Parashas Bamidbar wouldn’t normally evoke tears. But they fell! Tears of indescribable eloquence. Her sense of where she stood was, in any case, beyond words. She was there because she is Jewish, her history and her soul both were speaking loudly. She was there because she comes from an eternal people with an authentic sense of identity. She was drawn by tradition and a sense of belonging.

Land, language and culture are usually what define nationhood … but not for us. A Jew is a Jew whether or not he speaks Hebrew, lives in Israel, or likes gefilte fish. There are Jews who recognize that they are chosen, and that the Torah is their soul. There are also Jews who have little or no knowledge of Torah — but they are Jews; nothing will change that. They are as Jewish as the greatest sage or scholar.

The girl’s recital recalled one of the most famous tales of the Baal Shem Tov. A child was orphaned and adopted by a local member of the Polish minor nobility. His adoptive father gave him everything he could possibly want — except his roots. He somehow made it to the synagogue on Yom Kippur. He didn’t know the prayers, but he knew the Hebrew alphabet. He recited the holy letters again and again. Later, the Baal Shem Tov said that the purity of his recitation generated an awakening from Above and had the effect of nullifying a terrible decree against the entire community.

The heroes of both stories — the child in the time of the Baal Shem Tov and the 15-year-old in 2017— are very similar. The villain of both stories is ignorance of tradition; the disconnect from tradition is the tragic legacy of 2,000 years of exile.

It’s been a long exile. We have picked up the cultures and lifestyles of the people we have called our neighbors for 100 generations. It’s easy to forget who you are in an ocean of Otherness. Many reform and conservative Jews love the Kosel. They feel its draw, and let its light penetrate the layers of galus America, and galus Europa. They feel what the famous photo of the three soldiers standing in awe before the Kosel felt. Many of them are estranged from its history and its traditions. They are victims of galus. It left them so enmeshed with Western liberalism that they no longer value a religion that is older, more enduring, and far, far more authentic than the compromised admixture of galus and religion that they call home. I would ask them to look at their roots. “Did your grandmother wear tefillin? What color kippah did she put on?” I would also ask them, “Was she a guardian of what being Jewish means?” If you are Jewish, odds are she was, and she somehow resisted being swept up by the surrounding culture.

If any of those of you who want to renegotiate our tradition are reading this, I implore you, my dear, dear Jewish friends who love the Kosel: Stop the warfare. Stop combating the rest of us who love the Kosel no less than you do. When you threaten to withhold charity (in one instance a million dollars that would have gone to help Ethiopian children), you are cutting yourselves off from your people. Stop your relentless hostility, your false accusations in which you paint people like me as mindless haters who can look you in the eye and not see myself reflected back. If you love the Kosel, give it the most precious gift of all. Give it peace, and the right to be its eternal self.