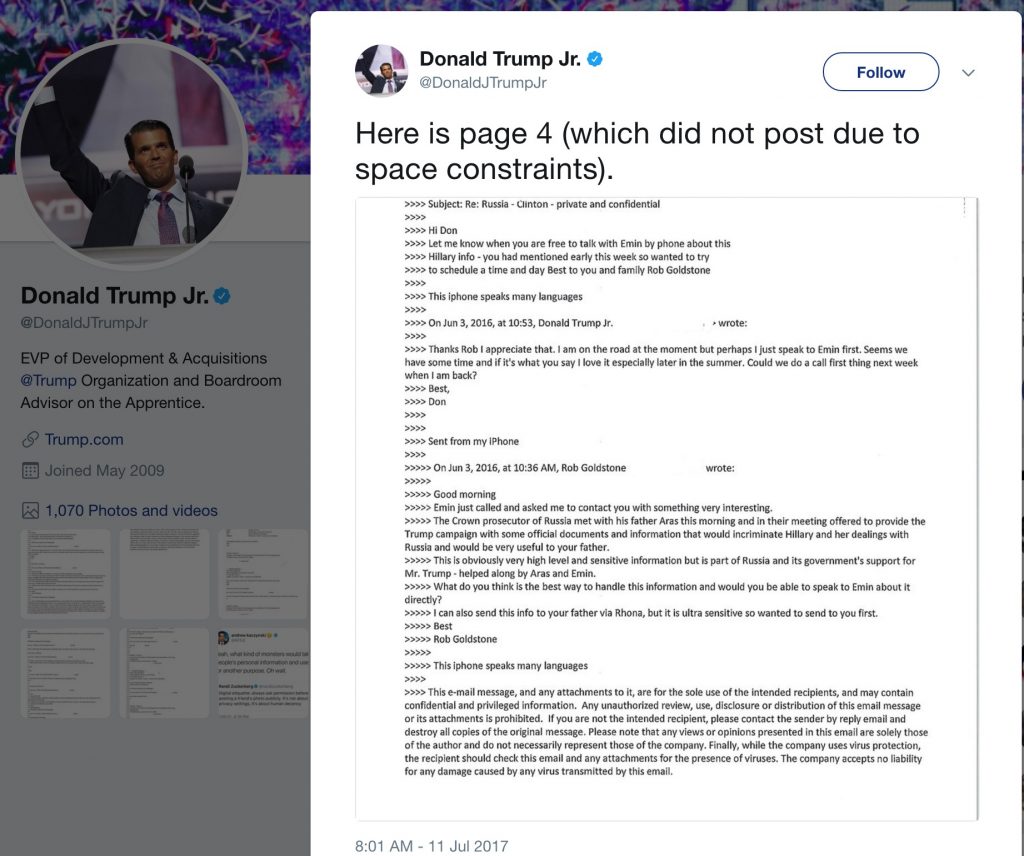 President Donald Trump’s eldest son released an email chain Tuesday that shows him discussing plans to hear damaging information on Hillary Clinton that were described as “part of Russia and its government’s support for Mr. Trump.”

The emails are the first documentary evidence of a top Trump associate knowingly engaging with what they believed to be a Russian government effort to help Trump in the 2016 election. In one of the emails to Trump Jr., the music publicist seeking to set up a meeting with a lawyer from Russia describes her as a “Russian government attorney.”

Trump Jr. was deeply involved in his father’s presidential campaign. He posted the emails Tuesday on Twitter and issued a statement describing it as an effort “to be totally transparent.” The emails with publicist Rob Goldstone show that Trump Jr. was told that the Russian government had information that could “incriminate” Clinton and her dealings with Russia.

Goldstone wrote to Trump Jr. that the information “would be very useful to your father.” Goldstone was working to connect Trump Jr. to Russian attorney Natalia Veselnitskaya, who later met with Trump Jr. in New York at Trump Tower. Veselnitskaya has denied that she ever worked for the Russian government.

“If it’s what you say I love it especially later in the summer,” Trump Jr. replied to Goldstone in one of a series of email exchanges the younger Trump posted to Twitter. The emails are dated early June.

The email release followed days of evolving accounts from Trump Jr. about the nature of the meeting and its purpose. The president’s son posted the emails only after they were obtained by The New York Times.

On Saturday, Trump Jr. described the encounter as being a “short introductory meeting” focused on the disbanded program that had allowed American adoptions of Russian children. Moscow ended the adoptions in response to Magnitsky Act sanctions created in response to alleged human rights violations in Russia.

A day later, Trump Jr. changed his account, acknowledging that he was told beforehand that Veselnitskaya might have information “helpful” to the Trump campaign, and was told by her during the meeting that she had something about Clinton.

In his third description of what occurred, on Tuesday, Trump Jr. said he had believed the information he would hear about Clinton would be political opposition research. He said he first wanted to speak by phone, but when that didn’t work out, he was told the attorney would be in New York “and I decided to take the meeting.”

“The woman, as she has said publicly, was not a government official,” Trump Jr. said in the Tuesday statement. “And, as we have said, she had no information to provide and wanted to talk about adoption policy and the Magnitsky Act.”