True Value Is Said to Mull Sale, Could Fetch About $800 Million 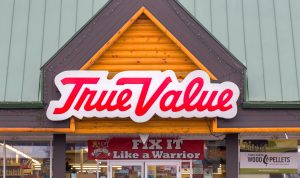 True Value is considering a sale that could value the home-improvement store chain at about $800 million, according to people familiar with the matter.

The company is working with an investment bank to examine strategic options, including a sale, said the people, who asked not to be identified because they weren’t authorized to speak publicly. The process is expected to attract private equity firms, the people said. No final decision has been made and the company may elect not to pursue a sale.

The company reported revenue of $1.51 billion in 2016, up 1.1 percent from the previous year, and it’s exploring alternatives at a time when other retailers are filing for bankruptcy at a record rate. Footwear chain Payless is seeking a reorganization after filing for bankruptcy, while clothing group J. Crew is in the midst of a debt-restructuring plan. Teen-clothing chain Rue21 Inc. entered bankruptcy in May, and Gymboree Corp. followed the next month.

True Value, led by Chief Executive Officer John Hartmann, is a cooperative of more than 4,000 stores across more than 58 countries, according to its website. Members of the cooperative, which can trace its origins back to 1948, also operate under the names Party Central, Taylor Rental, and Grand Rental Station.