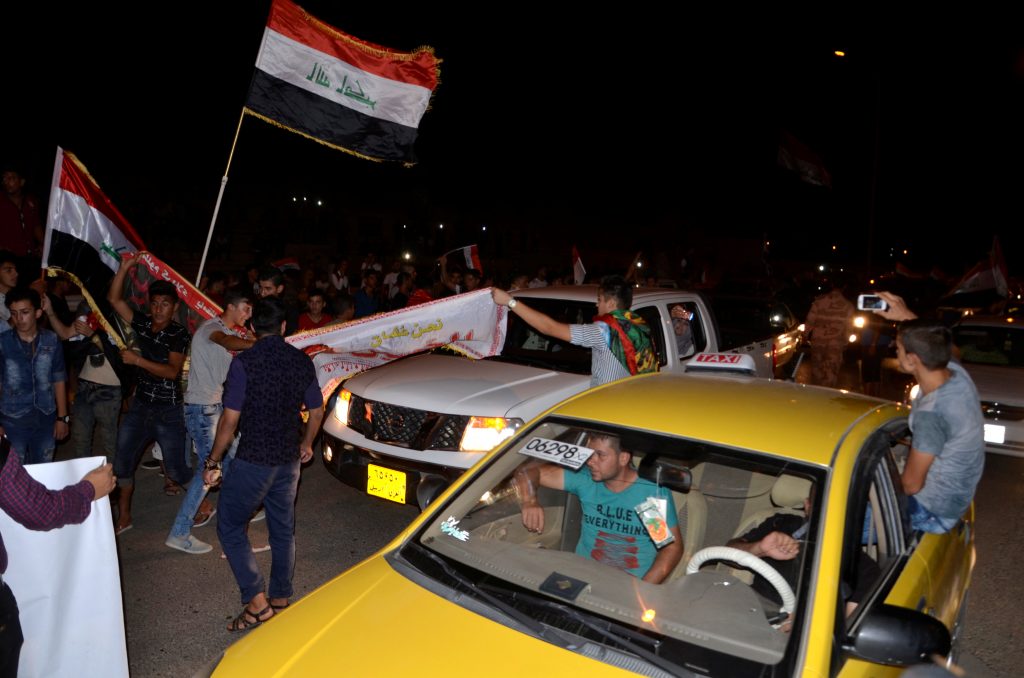 Sporadic clashes continued on Tuesday in Mosul, even after Iraq’s prime minister declared a “total victory” over the Islamic State terrorist group in the city and at least one airstrike hit the Old City neighborhood that was the scene of the fierce battle’s final days.

A plume of smoke rose into the air from the strike. IS mortar shells landed near Iraqi positions and heavy gunfire could be heard on the western edge of the Old City.

The developments underscore the dangers still posed by the terrorists after Iraqi forces announced they retook full control of Mosul, the country’s second-largest city, three years after it was seized by extremists bent on building a global caliphate.

Amnesty International warned in a report released on Tuesday that the conflict in Mosul has created a “civilian catastrophe,” with the extremists carrying out forced displacement, summary killings and using civilians as human shields. The report also detailed violations by Iraqi forces and the U.S.-led coalition.

“The scale and gravity of the loss of civilian lives during the military operation to retake Mosul must immediately be publicly acknowledged at the highest levels of government in Iraq and states that are part of the U.S.-led coalition,” said Lynn Maalouf, the research director for the Mideast at Amnesty.

The report, which covers the first five months of this year, noted how IS fighters moved civilians with them around the city, preventing them from escaping, creating battle spaces with dense civilian populations and “Iraqi forces and the US-led coalition failed to adapt [to] their tactics.”

The Iraqi forces and the U.S.-led coalition “continued to use imprecise, explosive weapons with wide-area effects in densely populated urban environments,” Amnesty stated, adding that some violations may constitute war crimes.

On Monday evening, Iraq’s Prime Minister Haider al-Abadi came to Mosul for the second day in a row to declare “total victory.” Flanked by his senior military leadership at a small base on the edge of the Old City, al-Abadi said “this great feast day crowned the victories of the fighters and the Iraqis for the past three years.”

But the Iraqi leader also alluded to the brutality of the conflict, saying the triumph had been achieved “by the blood of our martyrs.”

In Geneva, the U.N. human rights chief urged Iraq’s government to ensure that human rights will be respected in Mosul.

Zeid Ra’ad al-Hussein highlighted Mosul’s fall as the “turning point” in the conflict against IS, but warned that the group continues to subject people to “daily horrors” in its remaining strongholds such as Tal Afar, west of Mosul, and Hawijah, north of Baghdad.

“Horrific though the crimes of ISIL are, there is no place for vengeance,” said Zeid, who is a Jordanian prince, using an alternative acronym for the Islamic State group.

He cited allegations of threats of collective punishment and forced evictions in Mosul by Iraqi security forces and their allies. He also cited three years of rights violations during IS’s control of Mosul, including abuse of women and girls that “have left deep scars on Iraqi society.”

While Mosul fell to the Islamic State group in a matter of days in 2014, the campaign to retake the city, which began last October, has lasted nearly nine months.

For more than two years before the operation started, Iraqi forces backed by coalition airstrikes slowly clawed back territory from IS elsewhere in Iraq and tens of thousands of Iraqi troops went through a massive coalition training program.

The IS defeat in Mosul dealt a huge blow to the group’s so-called Islamic “caliphate” — territory that the terrorists seized, spanning large swaths of both Iraq and Syria — but also killed thousands, left entire neighborhoods in ruins and displaced nearly 900,000 from their homes.

Thousands of civilians are estimated to have been killed in the fight for the city, according to the provincial council of Nineveh, where Mosul is the capital — a toll that does not include those still believed buried under collapsed buildings.

Iraq’s military does not release official casualty numbers for soldiers killed in combat.

A statement late Monday from IS claimed its fighters were still attacking Iraqi soldiers in the al-Maydan area of Mosul’s Old City, purportedly killing and wounding many and seizing weapons and ammunition.

“The soldiers of the caliphate in Mosul continue to accomplish epics until they achieve either victory or martyrdom,” it said.

Also Monday, the United Nations said there was no end in sight to Iraq’s humanitarian crisis, despite the conclusion of the fighting in Mosul.

Of the more than 897,000 people displaced from Mosul, the U.N. said thousands of residents will probably not be able to return to the city because of “extensive damage caused during the conflict.”

“Make no mistake, this victory alone does not eliminate ISIS, and there’s still a tough fight ahead,” Lt. Gen. Stephen Townsend, the top U.S. commander in Iraq said in a recorded video from Baghdad following al-Abadi’s statement. ISIS is another acronym for IS, also referred to as Daesh, an Arabic name.

“The coalition will continue to support our Iraqi partners until ISIS is defeated in Iraq,” Townsend added, calling on Iraqis to unite and prevent a return of the conditions that allowed the extremists’ rise more than three years ago.