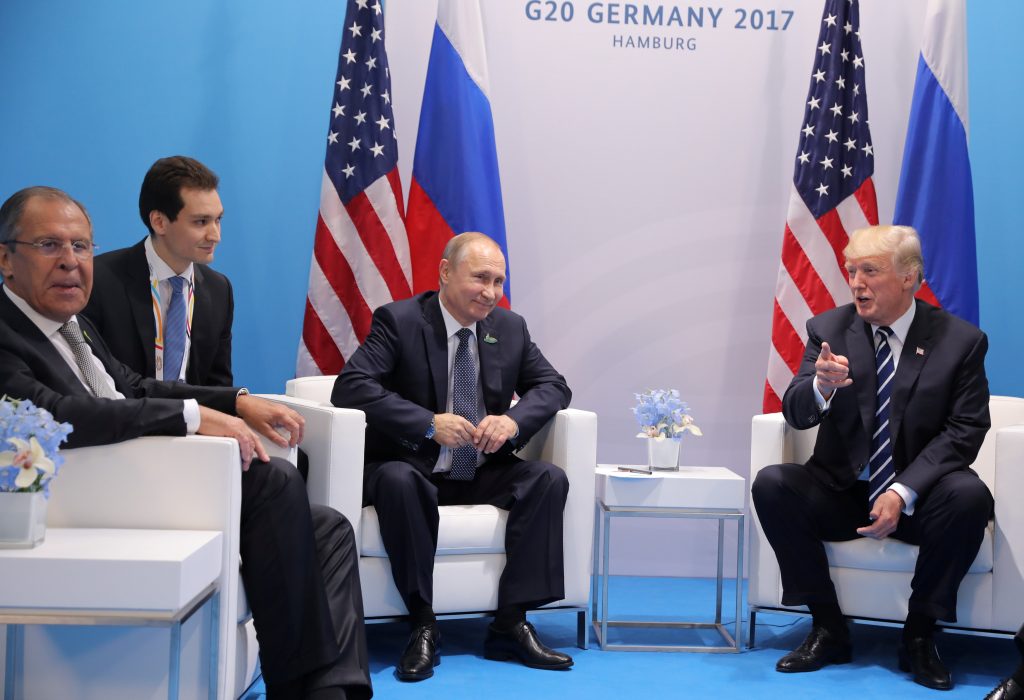 President Donald Trump on Sunday backtracked on his push for a cybersecurity unit with Russia, tweeting that he did not think it could happen, hours after his proposal was harshly criticized by Republicans who said Moscow could not be trusted.

President Trump said on Twitter early on Sunday that he and Russian President Vladimir Putin discussed on Friday forming “an impenetrable Cyber Security unit” to address issues like the risk of cybermeddling in elections.

The idea appeared to be a political nonstarter. It was immediately scorned by several of Trump’s fellow Republicans, who questioned why the United States would work with Russia after Moscow’s alleged meddling in the 2016 election.

Mnuchin said on Saturday that Trump and Putin had agreed to create “a cyber unit to make sure that there was absolutely no interference whatsoever, that they would work on cybersecurity together.”

But Trump returned to Twitter on Sunday to play down the idea, which arose at his talks with Putin at a summit of the Group of 20 nations in Hamburg, Germany.

“The fact that President Putin and I discussed a Cyber Security unit doesn’t mean I think it can happen. It can’t,” Trump said on Twitter.

He then noted that an agreement with Russia for a ceasefire in Syria “can & did” happen.

Senator John McCain of Arizona acknowledged President Trump’s desire to move forward with Russia, but added: “There has to be a price to pay.”

“There has been no penalty,” McCain, who chairs the Senate Armed Services Committee, told CBS. “Vladimir Putin … got away with literally trying to change the outcome … of our election.”

President Trump argued for a rapprochement with Moscow in his campaign but has been unable to deliver because his administration has been dogged by investigations into the allegations of Russian interference in the election and ties with his campaign.

Special Counsel Robert Mueller is investigating the matter, including whether there may have been any collusion on the part of Trump campaign officials, as are congressional committees including both the House of Representatives and Senate intelligence panels.

Those probes are focused almost exclusively on Moscow’s actions, lawmakers and intelligence officials say, and no evidence has surfaced publicly implicating other countries despite President Trump’s suggestion that others could have been involved.

Moscow has denied any interference, and President Trump says his campaign did not collude with Russia.

The president said he “strongly pressed President Putin twice about Russian meddling in our election. He vehemently denied it.”

He added: “We negotiated a ceasefire in parts of Syria which will save lives. Now it is time to move forward in working constructively with Russia!”

In President Trump’s first attempt at ending the six-year Syrian civil war, the United States, Russia and Jordan on Friday reached a ceasefire and “de-escalation agreement” for southwestern Syria. The ceasefire was holding hours after it took effect on Sunday, a monitor and two rebel officials said.

Any joint U.S.-Russia cyber initiative would have been a different matter. Depending how much it veered into military or espionage operations, it could have faced major legal hurdles.

Language in the 2017 National Defense Authorization Act prohibits the Pentagon, which includes the National Security Agency and the U.S. military’s Cyber Command, from using any funds for bilateral military cooperation with Russia.

Michael McFaul, a former U.S. ambassador to Russia, also noted restrictions on sharing information with Russia that would clearly prohibit offering Moscow a sense of U.S. cyber capabilities. Russia would be similarly adverse to revealing its capabilities to the United States, he noted.

“It just will not happen,” McFaul told Reuters.