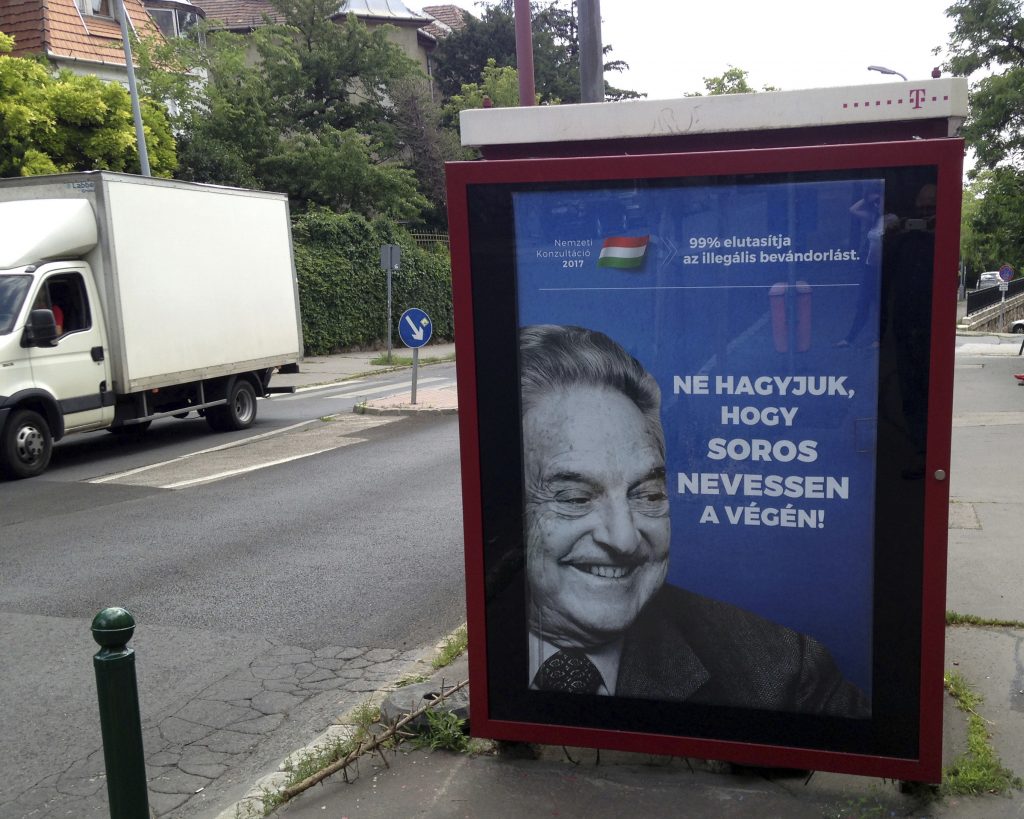 Israel’s foreign ministry has issued a statement denouncing U.S. billionaire George Soros, a move that appeared designed to align Israel more closely with Hungary ahead of a visit to Budapest next week by Prime Minister Binyamin Netanyahu.

Soros, a Hungarian-born Jew who has spent a large part of his fortune funding pro-democracy and human rights groups, has repeatedly been targeted by Hungary’s right-wing government, in particular over his support for more open immigration.

In the latest case, Prime Minister Viktor Orban has backed a campaign in which Soros is singled out as an enemy of the state. “Let’s not allow Soros to have the last laugh,” say billboards next to a picture of the 86-year-old investor, a campaign that Jewish groups and others say foments anti-Semitism.

Soros, who rarely addresses personal attacks against him, has not commented on the billboards. But Hungarian Jewish groups and Human Rights Watch, an organization partly funded by Soros, have condemned the campaign, saying it “evokes memories of the Nazi posters during the Second World War.”

Many posters have been defaced with anti-Semitic graffiti, including the words “stinking Jew” written in magic marker.

Israel’s ambassador to Hungary issued a statement denouncing the campaign, saying that it “evokes sad memories but also sows hatred and fear,” an apparent reference to Hungary’s part in the deportation of 500,000 Jews during the Holocaust.

But hours after the ambassador made his comments over the weekend, Israel’s foreign ministry issued a “clarification” saying that Soros was a legitimate target for criticism.

“In no way was the statement (by the ambassador) meant to delegitimize criticism of George Soros, who continuously undermines Israel’s democratically elected governments,” said foreign ministry spokesman Emmanuel Nachshon, adding that Soros funded organizations “that defame the Jewish state and seek to deny it the right to defend itself.”

A spokesman for Soros’s Open Society Foundations did not immediately respond to a request for comment.

The foreign ministry’s unusual decision to issue a statement clarifying comments by one of its ambassadors comes days before Netanyahu, who also serves as Israel’s foreign minister, is scheduled to visit Orban.

Israel is normally quick to denounce anti-Semitism or threats to Jewish communities anywhere in the world. While it made that point in the statement, it chose to focus on the threat it believes Soros poses to Israeli democracy.

Among the organizations Soros funds is Human Rights Watch, which is frequently critical of Israeli communities in Yehudah and Shomron.

Like Hungary, Israel has passed legislation that seeks to limit the influence of non-governmental organizations that receive a large portion of their funding from abroad.

Horthy was an ally of Adolf Hitler who approved anti-Jewish legislation in the 1920s and 1930s and cooperated with the Germans in deporting Hungarian Jews during the Holocaust.

Initially, Israel expressed alarm, but then quickly accepted the Hungarian government’s explanation that Orban had zero tolerance for anti-Semitism and was not suggesting that everything Horthy did was positive.

The strong ties between Netanyahu and Orban have raised eyebrows in the European Union, where Orban is regarded as an illiberal maverick. His party has curtailed press freedom and stymied EU efforts to tackle the migrant crisis.

Hungary has held discussions with Israel about purchasing security fences to keep migrants out, while Israel has sought better ties with countries that it hopes will take its side in any EU discussions where Israel is criticized.