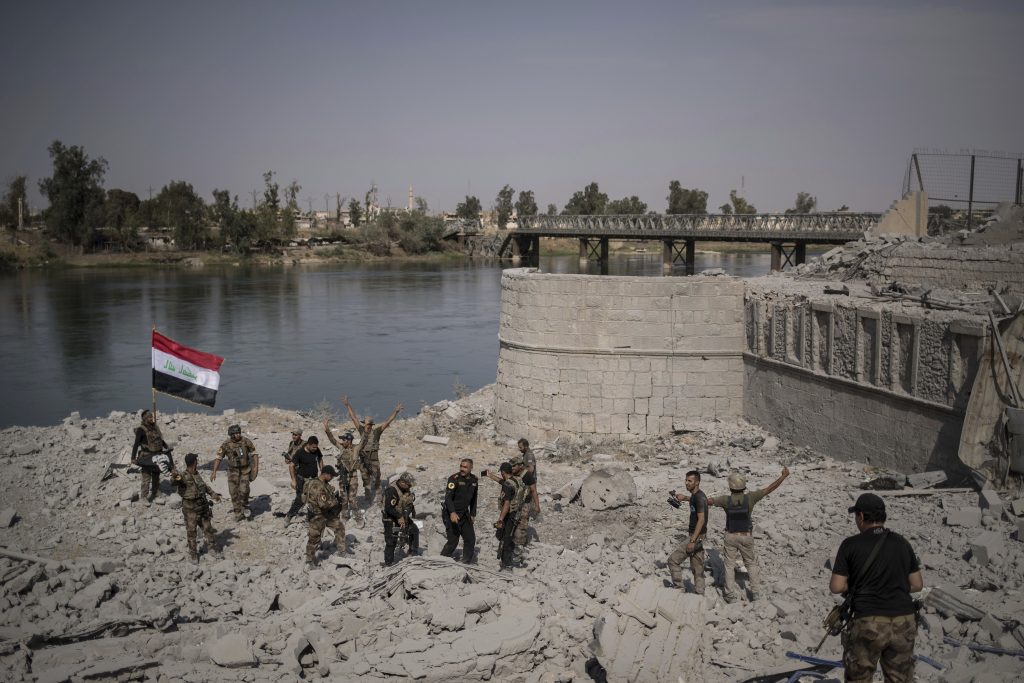 Iraqi forces slowly advanced on Monday to retake the last patch of ground in Mosul where Islamic State terrorists are holding on to a tiny sliver of the Old City, west of the Tigris River, a day after the prime minister visited the soldiers to congratulate troops on the hard-fought battle.

Brig. Gen. Haider Fadhil of the Iraqi special forces said that even after his men, closely backed by U.S.-led coalition airstrikes, retake the last areas of IS control, clearing operations in Mosul will continue to rid the city of sleeper cells and booby-trapped explosives.

Iraqi commanders say they believe hundreds of IS terrorists remain inside the neighborhood and are using their families — including women and children — as human shields in a fight to the death that has slowed recent Iraqi gains to a crawl.

“There’s no accurate estimate for the Daesh fighters and the families who are stuck there,” said Lt. Gen. Abdul-Ghani al-Asadi, a senior Special Forces commander, using the Arabic acronym for IS.

He said most civilians left in the Old City are believed to be IS family members. “But we will not accuse them of anything,” he continued, “if they don’t carry weapons, they are civilians.”

Mosul, Iraq’s second-largest city, fell to the Islamic State group in 2014, when IS blitzed across much of northwestern Iraq and subsequently declared a caliphate on the territory held by terrorists in Iraq and Syria.

Iraqi forces launched the operation to retake Mosul last October and by late January, the eastern half of the city — which is roughly divided by the Tigris into a western and eastern section — was declared liberated. The push into western Mosul began the following month and in June, Iraqi forces started the weeks-long push through the Old City, Mosul’s most congested district.

On his visit to Mosul, al-Abadi met field commanders, kissed babies and toured a reopened market. But airstrikes and sniper fire continued amid the revelry as the terrorists stubbornly held on to a small area in the Old City.

Over the nearly nine-month campaign, Iraqi forces have reduced the IS hold on Mosul to less than a square mile of territory.

“We are glad to see normal life return for the citizens,” al-Abadi said, according to a statement from his office. “This is the result of the sacrifices of the [country’s] heroic fighters.”

A few kilometers away, Special Forces commanders climbed over mounds of rubble on the edge of the Old City to plant an Iraqi flag on the western bank of the Tigris, marking weeks of hard-fought gains.

The fierce battle for Mosul has killed thousands and displaced more than 897,000 people. Last month, as Iraqi troops closed in on the Old City, the terrorists destroyed the al-Nuri Mosque and its famous leaning minaret to deny the Iraqi forces a symbolic triumph.