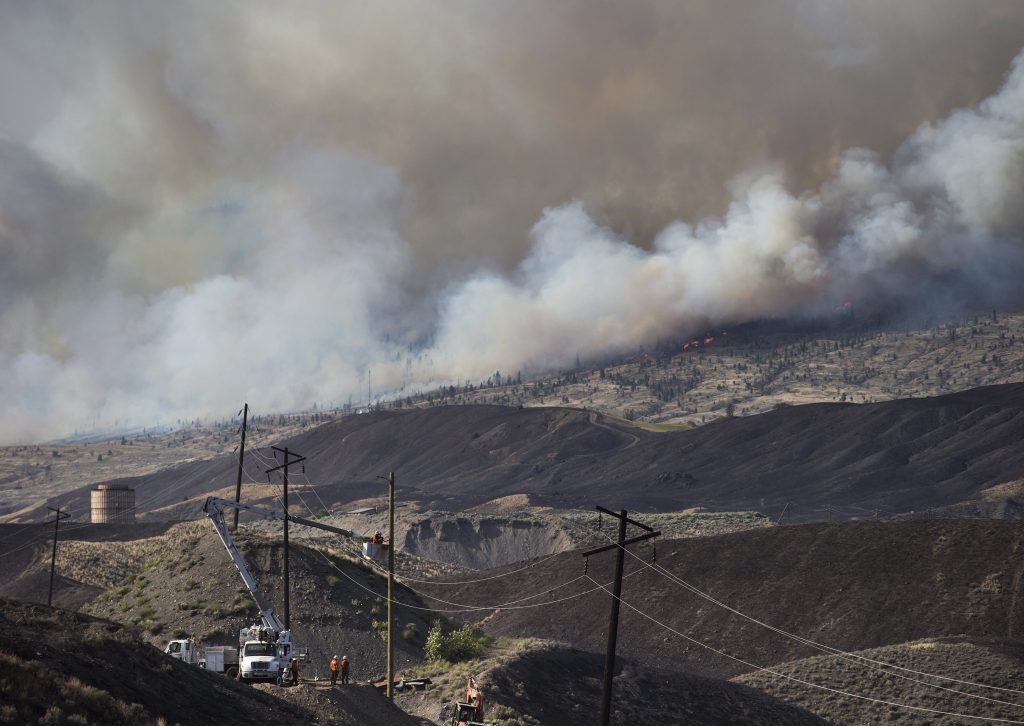 Following a searing weekend, slightly cooler temperatures and diminishing winds were helping firefighters Monday as they battled several California wildfires that have forced thousands of residents to flee. Crews also made progress on wildfires in Colorado, Arizona and New Mexico.

Here’s a closer look at the fires burning in the western United States and Canada.

Crews made progress overnight on a blaze that swept through grassy foothills in the Sierra Nevada, about 60 miles (97 kilometers) north of Sacramento.

Containment was up to 35 percent, said Mary Ann Aldrich, spokeswoman for the state fire protection agency.

About 4,000 people remain under evacuation orders. But Aldrich said if winds continue to die down, authorities are hopeful some will be able to return to their homes Monday.

The area burning was southeast of Oroville, where spillways in the nation’s tallest dam began crumbling from heavy rains this winter and led to temporary evacuation orders for 200,000 residents downstream.

“It leaves you feeling like you can’t catch a break,” said Sharon Reitan, who sought shelter at an evacuation center with her friend Sunday night.

They were in Oroville on Friday when the fire broke out and roads to their hillside home were blocked. They later saw photographs of their home burned to the ground.

The wildfire was one of more than a dozen across California that about 5,000 firefighters battled Monday.

In Southern California, at least 3,500 people remain evacuated as a pair of fires raged at separate ends of Santa Barbara County. The largest of the two has charred more than 45 square miles (116 square kilometers) of dry brush and is threatening more than 130 rural homes. It’s 15 percent contained.

The fires broke out amid a blistering weekend heatwave that toppled temperature records and made conditions dangerous for firefighters. Slightly cooler weather was expected to give crews a break in the coming days.

About 50 miles (80 kilometers) to the south, a 17-square-mile (44-square-kilometer) blaze shut down State Route 154, which was expected to remain closed for days. It’s just 5 percent contained.

At least 20 structures burned, but officials didn’t say if they were homes.

The fire broke out near a campsite and sent hundreds of campers scrambling, including about 90 children and 50 staff members at the Circle V Ranch who had to take shelter until they could be safely evacuated.

Some of the firefighters working to contain the Santa Barbara County blazes were sent to nearby San Luis Obispo County when a fire broke out Sunday and threatened numerous structures near the town of Santa Margarita. Officials said the fire burned less than one square mile (about one-third square kilometer).

The fight against a wildfire that temporarily forced the evacuation of hundreds of people near the resort town of Breckenridge, Colorado, is winding down.

Firefighters had built containment lines around 85 percent of the blaze as of Monday, and residents of nearby homes were no longer on standby to evacuate. Crews and equipment were starting to be sent to other fires burning around the West.

The fire two miles (three kilometers) north of the Breckenridge ski area hasn’t spread significantly and was burning on less than one square mile (about one-third square kilometer).

Elsewhere, residents who fled a rural Arizona community over the weekend because of a wildfire that destroyed three homes have returned.

The blaze burned half a square mile (1.4-square-kilometers) of salt cedar primarily along the San Pedro River and was 60 percent contained as of late Sunday.

In New Mexico, firefighters were mopping up a wildfire that sent a tall plume of smoke from mountains overlooking Albuquerque late last week.

Firefighters were contending with more than 200 wildfires burning in British Columbia that had destroyed dozens of buildings, including several homes and two airport hangars.

The three biggest fires, which have grown in size to range from 9 to 19 square miles (23 to 49 square kilometers), had forced thousands to flee.

“We are just, in many ways, at the beginning of the worst part of the fire season and we watch the weather, we watch the wind, and we pray for rain,” outgoing Premier Christy Clark told reporters in Kamloops.

Rob Schweizer, manager of the Kamloops Fire Centre, said it had been an unprecedented 24 hours.

“We probably haven’t seen this sort of activity that involves so many residences and people in the history of the province of B.C.,” he said.