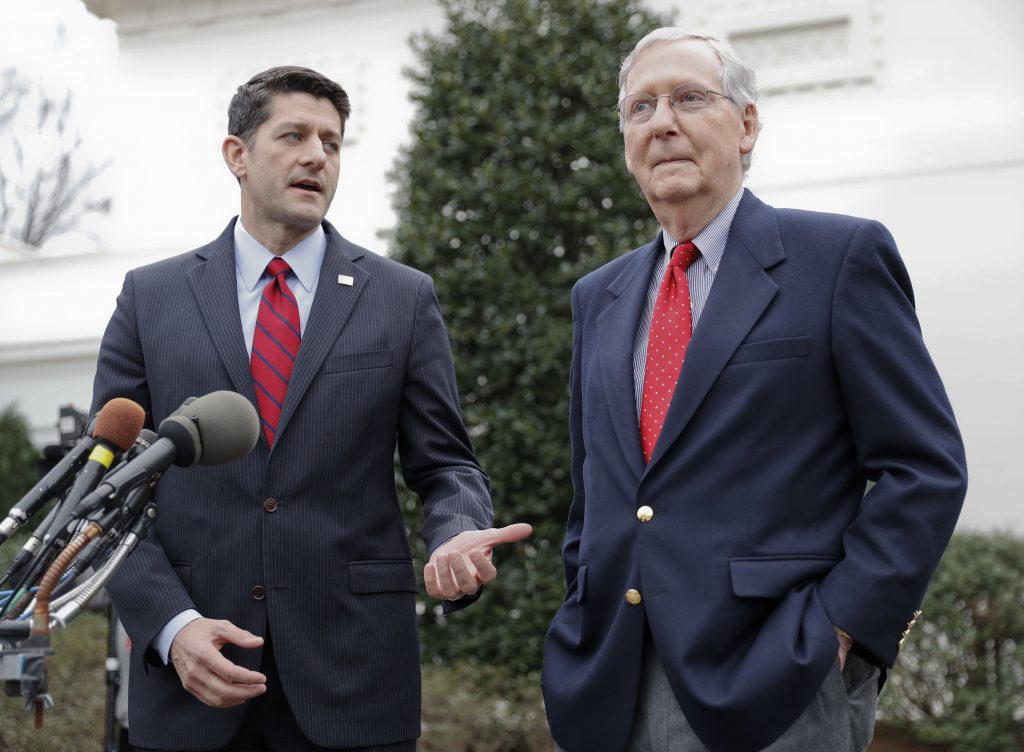 The GOP campaign to repeal Democrat Barack Obama’s health-care law is bogged down in the Senate and flirting with collapse. Efforts to pass a budget are stuck, there’s no tax code overhaul package, spending bills are in limbo and it’s unclear how leaders will find the votes to avert a federal default.

The difficulties flow from Republican divisions. Collectively, the problems are threatening to sink top GOP priorities and undermine the party’s ability to show it can govern effectively.

Lawmakers have three weeks of work before an August recess. Some Republicans are making noise about shortening that respite, but doing so would be a step shy of sacrilege on Capitol Hill.

It took the House several tries to pass its bill aiming to annul much of Obama’s health-care law. Now, Senate Majority Leader Mitch McConnell is struggling to find GOP votes for a similar package replacing that 2010 statute with one easing insurance coverage requirements, cutting Medicaid, erasing penalties on people not buying insurance and repealing tax increases on the well-off.

McConnell, R-Ky., unexpectedly called off a pre-recess vote on the measure — which he’d written privately — as it became clear it would lose. With Democrats arrayed unanimously against him, McConnell needs at least 50 of the 52 GOP senators to vote yes or witness the mortifying crumpling of his party’s high-decibel pledge to uproot Obama’s law.

McConnell has been calibrating changes that might win over worried Republicans, but there’s no sign he’s made progress. Revisions under consideration would lessen the bill’s Medicaid cuts, boost spending for programs combatting drug abuse, fatten health care subsidies for low earners and make it easier for insurers to sell skimpier, lower-cost policies.

A vote is expected no earlier than the week of July 16. McConnell has said if the measure flops, he’d push a narrower bill propping up ailing health insurance marketplaces.

Republicans are stuck on a fiscal blueprint for the coming budget year, with disputes between conservatives and moderates over how deeply to cut programs like food stamps. None of the 12 annual spending bills financing federal agencies is finished.

Disagreements have slowed work on a tax overhaul. And no one knows what bargains will be needed to assure autumn passage of a bill extending government borrowing authority and avoiding a crushing federal default.

House Speaker Paul Ryan, R-Wis., told reporters Friday that he’d “prefer” to pass the budget in July, suggesting it might linger until fall, adding to Congress’ late-year mountain of work.

Some conservatives in Congress, meanwhile, want to include measures to cut spending as part of any extension of the government’s borrowing authority.

But Treasury Secretary Steven Mnuchin reiterated Sunday on ABC that the administration prefers a straightforward extension, without including contentious agreements on spending cuts.

Mnuchin also knocked down a report last week that Trump administration adviser Steve Bannon has floated a tax increase on the wealthiest households as a way to pay for tax cuts for middle-income Americans.

“I’ve never heard Steve mention that,” Mnuchin said.” He added that the increase is not part of the administration’s tax plan.

The administration is aiming to release its full tax plan by September, Mnuchin said, a deadline that was previously announced in late June. So far, the administration has issued a one-page summary of broad principles for tax reform, but few details.

The GOP congressional leadership and the Trump administration have struggled with the issue of how to offset the cost of tax cuts. Mnuchin said the administration’s plan would pay for itself, if about $2 trillion in increased revenue resulting from faster economic growth is included. Yet congressional budget scorekeepers may not agree that tax cuts would produce such growth.

Under congressional budget rules, tax cuts can be passed with a simple majority, but only if they don’t increase the deficit after 10 years.

The House is slated to vote this week on a sweeping policy bill that takes issue with Trump’s proposed trim to missile defense spending as North Korea pushes its development of weapons capable of striking the United States.

The defense bill would provide $696 billion for the Pentagon. It has $28.5 billion more for core Pentagon operations than Trump requested, including an additional $2.5 billion for programs aimed at shielding the homeland from missiles. There’s extra money for new jet fighters, ships and additional active duty troops.

Less certain is how quickly Republicans move on legislation passed by the Senate that would hit Russia and Iran with new sanctions. Democrats are pressing for fast action, but the measure was not on the House schedule for the week. The legislation easily cleared the Senate in June.

Christopher Wray gets his turn in the spotlight as a Senate panel holds a confirmation hearing on Trump’s choice to replace ousted FBI Director James Comey.

Trump fired Comey in May as the FBI investigation into Russian meddling in the presidential election pressed on. Members of the Judiciary Committee are certain to press Wray on how independent he would be from Trump.

Two women — one Republican, one Democrat — have worked closely on energy issues.

Now, Alaska Sen. Lisa Murkowski and Washington Sen. Maria Cantwell have a bill to speed federal approval of projects to export liquefied natural gas and boost other energy sources and efficiency measures. The legislation also sets up a land and water conservation fund.

The proposal resembles one the pair pushed through the Senate last year. Murkowski chairs the Senate Energy and Natural Resources Committee, while Cantwell is the committee’s top Democrat.

The bill failed last year over a dispute with the House, which adopted its own measure focused on oil drilling and rolling back federal protections for the gray wolf and other threatened wildlife.

Murkowski would like the House to vote on the bill before August.