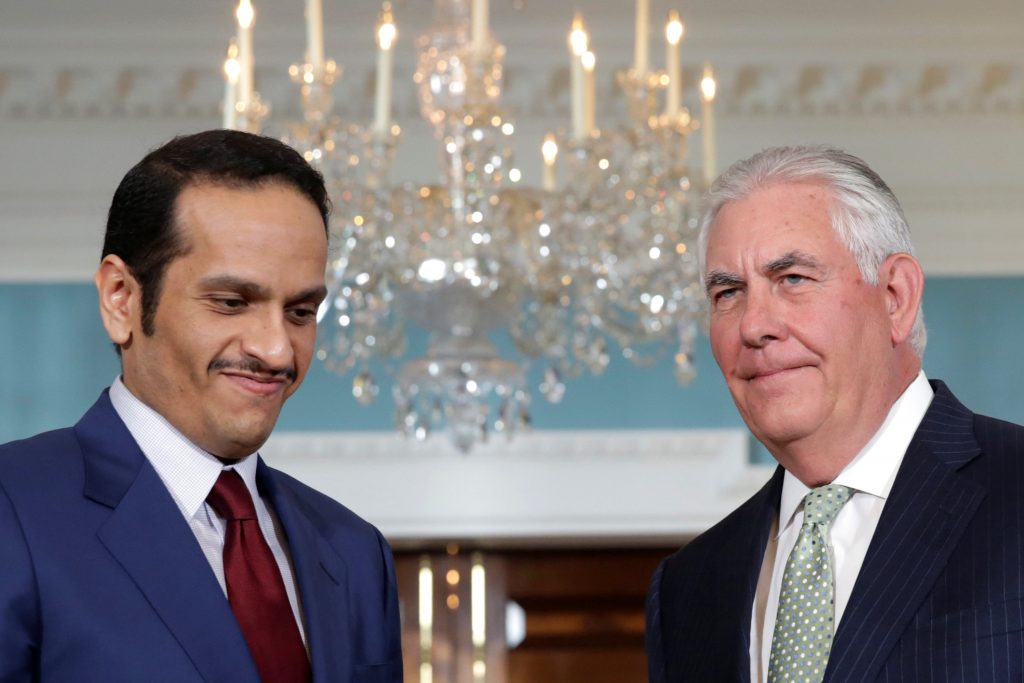 After weeks of public statements and private phone calls with no apparent result, Secretary of State Rex Tillerson has decided to personally intervene in the ongoing Persian Gulf dispute that has threatened U.S. counterterrorism operations in the Middle East.

Tillerson will travel late Monday to Kuwait, where its government has unsuccessfully tried to mediate between Saudi Arabia and three other Arab countries that have blockaded and broken relations with the tiny, energy-rich nation of Qatar, home to the largest U.S. military base in the region.

He will spend the week talking to leaders of the warring gulf capitals, receiving them in Kuwait or shuttling among regional capitals, according to senior U.S. officials.

Tillerson’s first foray into high-stakes crisis negotiation comes as his stewardship of the State Department has been questioned in Congress, the White House and within the Department itself.

Senior White House officials have complained that he has walled himself off behind a handful of senior aides and takes neither their phone calls nor their recommendations. Lawmakers have asked what he intends to do about President Donald Trump’s proposal to slash State’s budget by nearly a third, and made clear they will not permit it.

Scores of high-level jobs and ambassadorships remain unfilled as the secretary has opted to review the structure of the entire organization and pare back the overall workforce before making new appointments.

According to an outside survey commissioned by Tillerson and completed last month, many of his own staffers agree that the department does not foster innovation and is too big. Many of the 35,000 who participated described a system hampered by layers of bureaucracy, including dozens of special-envoy offices created to serve temporal needs and allowed to continue in existence long after those needs have disappeared.

But the survey results, first reported last week by the Wall Street Journal, also described State employees as demoralized and unsure of the direction in which Tillerson wants to take them. Many echoed congressional complaints about crucial senior positions left unfilled while the secretary takes his time deciding which offices are important and who should occupy them.

Success in the Gulf would help reestablish at least some of the goodwill with which Tillerson, considered a man experienced in both institutional management and the ways of the world, began his tenure. The former chief executive of energy giant Exxon Mobil, who brought extensive global contacts with him to the State Department, was seen on Capitol Hill, within the department and abroad as a mature counterbalance to an impetuous, inexperienced president.

But even senior officials who see Tillerson as the perfect man for the job of stopping the escalating gulf crisis, warn that it will not be easy. While the dispute, at least on its surface, is about accusations of support for terrorism, all of the countries involved are key members of the U.S.-led coalition against the Islamic State. Already, their actions have drawn in other regional friends and foes, from Iran and Turkey on Qatar’s side, to Jordan and a host of smaller Muslim countries supporting Saudi Arabia.

In the face of deep-seated antagonisms and dug-in positions, U.S. leverage is limited. All of the players want to stay in America’s good graces, and all see the Trump administration’s focus on the region, and willingness to confront shared enemies, as an improvement over what they viewed as President Barack Obama’s hesitancy and disengagement. But there is little sense of how far the Trump administration, with equities to preserve throughout the region, is willing to go in pressing for resolution.

More than any specific charge or countercharge the parties have leveled at each other, the major U.S. concern is that the dispute itself is undermining goals in the Middle East. Although officials insist it has not yet directly affected operations at the massive U.S. air base in Qatar, the major U.S. naval base in Bahrain or the other cooperative ventures that play a central role in the wars in Syria, Iraq and Afghanistan, it risks diverting attention from those missions.

Part of the problem is President Trump himself, who has publicly taken Saudi Arabia’s side in a series of tweets and statements. The Saudis, along with the United Arab Emirates, Bahrain and Egypt, have accused Qatar of financing and supporting terrorist organizations, a charge they hammered home with Mr. Trump when Riyadh hosted him for a lavish, three-day visit on his first trip abroad in May.

Tillerson, along with Defense Secretary Jim Mattis, has called for the parties to resolve their differences sooner rather than later. While both agree that Qatar could do more to stem terror financing from within its borders, they believe the same, in varying degrees, of all the gulf countries.

Tillerson has pointedly suggested that the Saudis are using the headline-grabbing terrorism issue as a cover to alter other Qatari policies they have long found displeasing. After consultation with the secretary, Senate Foreign Relations Committee Chairman Bob Corker, R-Tenn., last month vowed that Congress would not approve arms deals with states in the region, including most of the $110 billion in proposed U.S. weapons sales to Saudi Arabia touted by Trump during his visit there, until the dispute was resolved.

Mattis has gone out of his way to lock arms with Qatar as a security partner. He hosted its defense minister last month in Washington. On Thursday, the Pentagon announced another Mattis call to the minister, Khalid al-Attiya, in which it said the two “affirmed their commitment to continued U.S. cooperation and deepening their strategic partnership.”

After Qatar refused their demands last week, the Saudis and their partners vowed to impose unspecified harsher actions. Arab diplomats have said they could include freezing Qatari bank accounts as well as other sanctions, a major step in a region where economies and finance often span borders. As the situation now stands, there appears to be no way out that does not involve a humiliating stand-down by one side or the other.

“We’ve become increasingly concerned that the dispute is at an impasse at this point,” State Department spokeswoman Heather Nauert said Thursday as Tillerson began to plan his shuttle diplomacy. “We believe that this could potentially drag on for weeks. It could drag on for months. It could possibly even intensify.”

The terrorism-financing charge that gained Mr. Trump’s attention may be the easiest to resolve with increased U.S. monitoring, administration officials said.

But most of the demands Saudi Arabia and its partners have made, and Qatar has rejected, revolve around years-long disputes about the role of political Islam and internal control by the region’s authoritarian governments. They include a demand to ban the Muslim Brotherhood, the Pan-Arab Islamist movement that operates in different guises in different countries.

Administration officials believe a compromise could be worked out, perhaps by Qatar stopping its support for Brotherhood organizations in Egypt and Libya. Similarly, they hope the demand to shut down the Qatar-funded media operation Al Jazeera can be addressed with changes in programming.

Until now, however, Saudi Arabia has said that its demands are “nonnegotiable.”