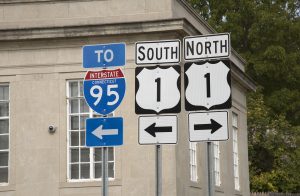 Connecticut State Police say a New York woman who left her vehicle to tend to a child in the backseat on Interstate 95 was fatally struck by another car.

Troopers say 31-year-old Emma Torres exited the vehicle Saturday night in Bridgeport in the southbound lane. Torres, of Mamaroneck, New York, was then sideswiped by an oncoming vehicle.

Torres was taken to Bridgeport Hospital where she later died of her injuries. No one else was hurt.