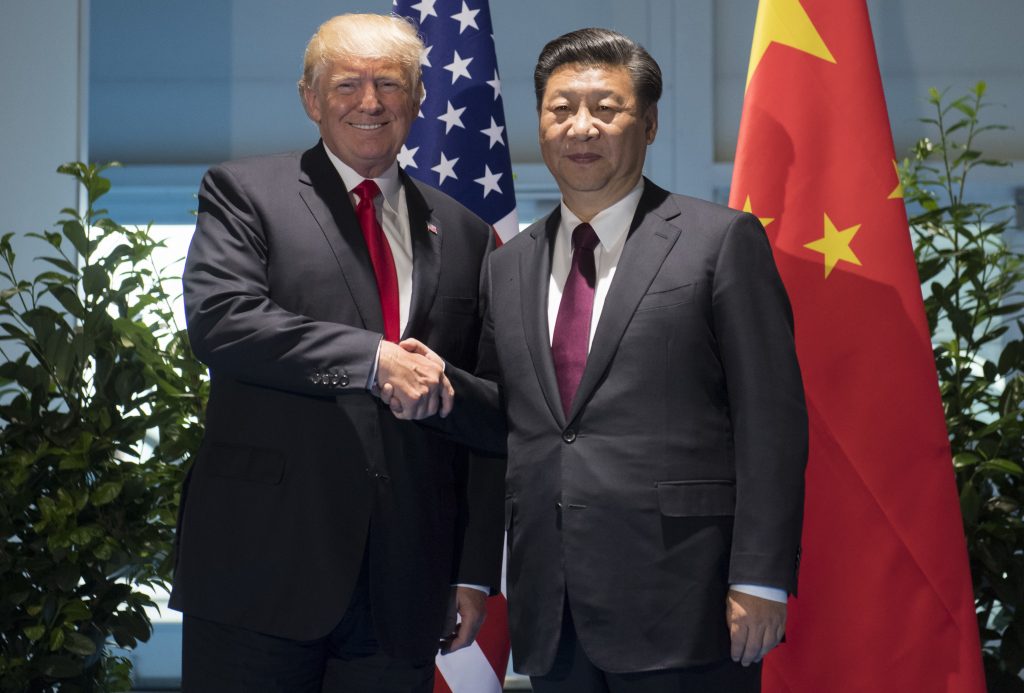 Wrapping up his second European tour, President Donald Trump and Asian allies searched for consensus Saturday on how to counter what the president called the “menace” of North Korea after its test-launch of an intercontinental ballistic missile.

The White House said after the meeting with Abe that the U.S. was “prepared to use the full range of capabilities” in defense of Japan. President Trump and Abe committed, the White House said, “to redoubling their efforts to bring all nations together to show North Korea that there are consequences for its threatening and unlawful actions.”

The Trump administration has tried to pressure Beijing to rein in North Korea, a major trading partner, to halt Kim Jong Un’s development of nuclear weapons before they have the ability to threaten the U.S. homeland. President Trump has voiced his frustration in recent days that China hasn’t done more, suggesting he may be moving on.

But during his meeting, President Trump told Xi, “I appreciate the things that you have done relative to the very substantial problem that we all face in North Korea.”

President Trump’s extensive slate of meetings with Abe, Xi, British Prime Minister Theresa May and others came on the final day of the annual Group of 20 summit, which has been marked by violent demonstrations by anti-globalization activists. President Trump also had a brief, unscheduled meeting with Turkey’s President Recep Tayyip Erdogan about the situation in Syria.

Abe, speaking through a translator, noted that the security situation in the Asia Pacific region has become “increasingly severe” due to North Korea’s push to develop its ballistic missile and nuclear program. Abe said he wanted to “demonstrate the robust partnership as well as the bonds” between Japan and the U.S. on the issue.

North Korea’s successful test launch of an ICBM was a major milestone in its long-term effort to build a missile that could carry a nuclear warhead to attack the United States.

The issue was a frequent topic of discussion at the summit, and the White House said earlier that the U.S., South Korea and Japan were pressing for additional measures against North Korea to demonstrate the “serious consequences” for its latest provocations.

The three nations have been calling for “early adoption” of a new U.N. Security Council resolution and additional sanctions to demonstrate to Pyongyang the consequences of its actions.

Bringing China on board is a key part of the plan. The administration wants China to fully enforce international sanctions intended to starve Pyongyang of revenue for its nuclear and missile programs. But President Trump has been dissatisfied with China’s response.

Earlier in the week, he vented on Twitter that trade between China and North Korea had grown nearly 40 percent at the start of 2017. “So much for China working with us – but we had to give it a try!”

Trump officials said later that the president hadn’t given up on the relationship.

Trade was also a key part of the discussions. The Trump administration is investigating the possibility of putting new barriers on steel imports based on national security considerations, a move that could target China, which has flooded international markets with cheap steel exports.

Meeting with May, the British leader, President Trump pointed to their “special relationship,” and said the two countries were working on a trade agreement.

May was the first foreign leader to visit President Trump at the White House and he told her he would soon “be going to London” once details were worked out. Independent trade negotiations between the two countries are a possibility as Britain exits the European Union — a move President Trump has supported.

Earlier, President Trump said Saturday he had a “tremendous meeting” with Russian President Vladimir Putin on Friday, his first comments on the high-profile talks with the Russian leader. President Trump raised the issue of Russia’s meddling in the 2016 elections and discussed plans for a ceasefire agreement in Syria.

U.S. Secretary of State Rex Tillerson said Friday that President Trump and Putin had a “robust and lengthy” discussion about Russian election interference but Putin denied any involvement.

Putin, in a Saturday news conference, offered his version of events and said he thought President Trump believed his in-person denials of Russian meddling.

Tillerson, who took part in the meeting, said President Trump had been “rightly focused on how do we move forward from something that may be an intractable disagreement at this point.”

President Trump planned to return to Washington on Saturday evening after the conclusion of the annual G-20 meetings. He won’t be stateside for long: The president is scheduled to return to Europe next week to attend Bastille Day celebrations in Paris.