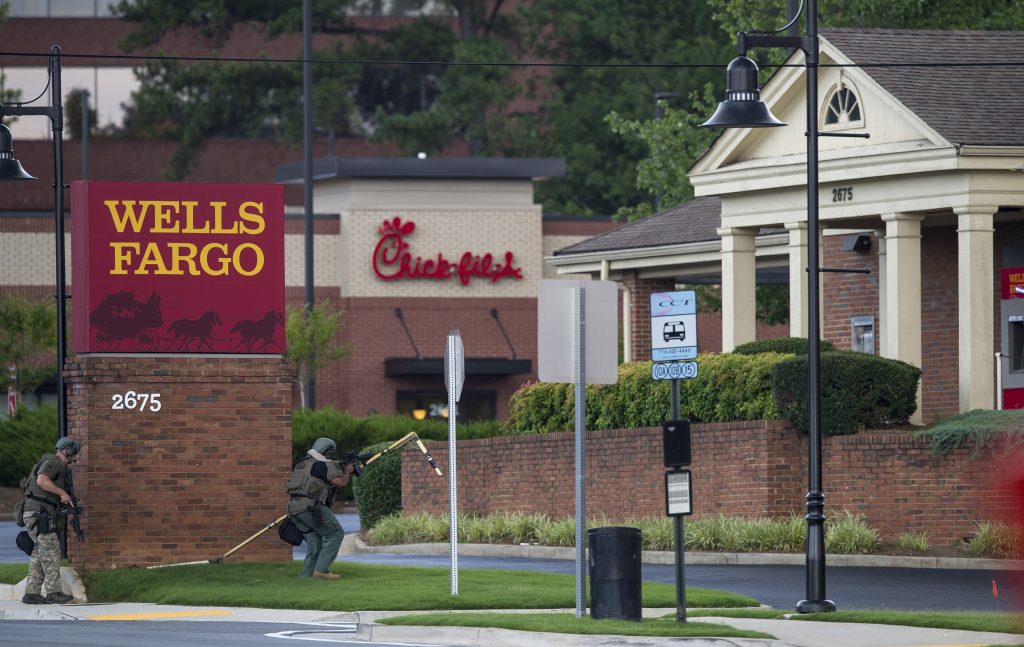 An hourslong standoff inside a suburban Atlanta bank ended when an officer shot and killed a man who had claimed to have a bomb that could “take out the room.”

Cobb County police Sgt. Dana Pierce confirmed the man died in an “officer involved shooting.” Pierce said a police bomb squad had rendered safe a backpack in which the suspect claimed to have a bomb. Police were still analyzing the contents to determine if he actually had explosives, he said.

Two people were freed shortly after a military-type vehicle smashed its way through the wall, raining bricks onto its hood. However, it’s not clear if they escaped through the wall opening.

Heavily armed police officers had converged on the bank earlier in the day.

Police had said the man inside the bank branch near Marietta had made threats and was inside with an unknown number of employees.

The Georgia Bureau of Investigation identified the man as Brian Easley late Friday after notifying his family. GBI spokeswoman Nelly Miles described Easley as a transient.

Police had previously limited the amount of information they made public, saying the suspect might be monitoring news coverage and social media, Cobb County police Officer Alicia Chilton said in a statement to The Associated Press.

WSB-TV in Atlanta reported the station received a call Friday morning from a man who said he was inside the bank and talked for more than 30 minutes.

He told the station’s assignment desk that he had a bomb and two people with him. He said he didn’t intend to hurt anyone, the station reported. He also said he was a homeless Marine Corps veteran who had served in Iraq and that he was the father of an 8-year-old girl and unhappy with the U.S. Department of Veterans Affairs, which provides health care to veterans.

At one point he put the hostages on the phone to verify they were OK.

“He’s being very respectful,” one of the hostages told the station.

In the station’s video account of the conversation, the man can be heard saying that the bomb had the power to “take out the room.”