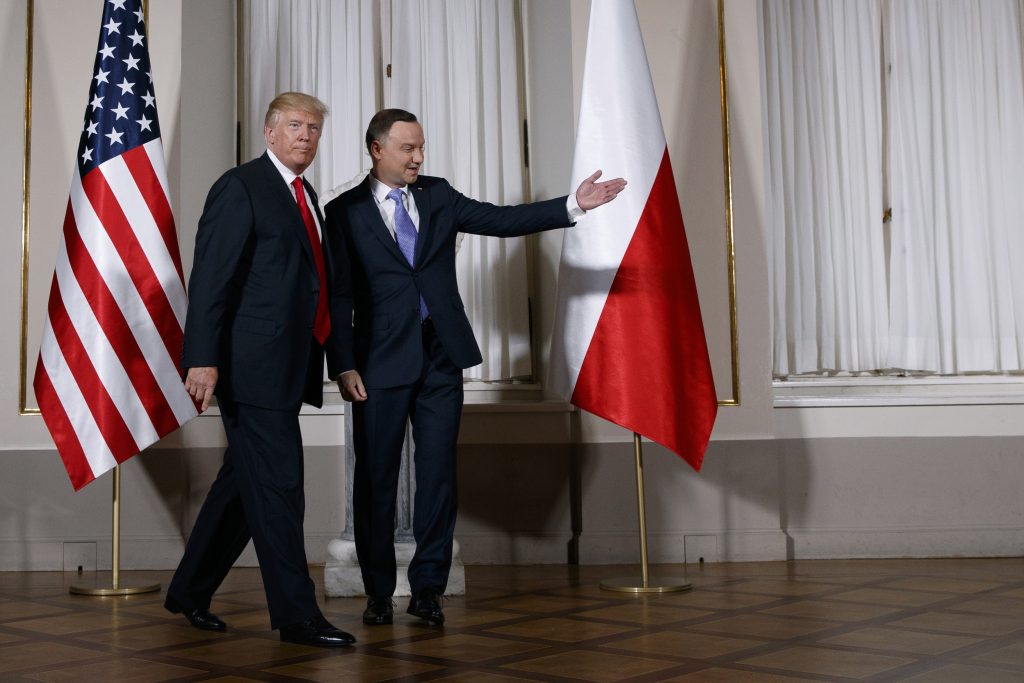 President Donald Trump warned North Korea on Thursday that he’s considering “some pretty severe things” in response to the isolated nation’s unprecedented launch of a missile capable of reaching the U.S. He called on all nations to confront the North’s “very, very bad behavior.”

President Trump, in his first public comments since North Korea tested an intercontinental ballistic missile for the first time, declined to offer specifics about what a U.S. response might entail, though he called it a “threat” and said the U.S. would “confront it very strongly.” Trump said it wasn’t certain he’d follow through on the severe steps he was weighing, adding that he does “not draw red lines.”

“It’s a shame that they’re behaving this way,” President Trump said of North Korea’s leaders. “But they are behaving in a very, very dangerous manner, and something will have to be done about it.”

The U.S. has been considering a range of possible sanctions, economic measures and other steps in response to Pyongyang’s actions. The test of an ICBM marked a major technological advancement for North Korea that U.S. officials have described as intensifying the threat against the U.S. by bringing the North closer to being able to mount a nuclear warhead atop a missile that could hit American soil.

President Trump’s comments in Poland came as he opened his second visit to Europe, a trip that will include meetings with several European leaders including Russian President Vladimir Putin.

President Trump started his first day in Europe at the Royal Castle, welcomed by President Andrzej Duda and a vigorous handshake in front of a white marble bust of Stanislaw August Poniatowski, the last king of Poland. The leaders then retreated to a room decorated with red walls for their private talks.

Asked how he felt about the trip, President Trump said, “Great.” President Trump arrived in the Polish capital of Warsaw late Wednesday for a whirlwind 16-hour stop in the eastern European nation. Later Thursday, he heads to Germany for a summit of leaders from the world’s rich and developing nations.

Duda told Polish broadcaster TVN24 on Wednesday that he wanted to focus the meeting on concrete issues like energy security for an eastern European region that remains heavily reliant on oil and gas deliveries from Russia, and not on “some general talk about world security.”

The leaders will also discuss further deliveries of U.S. liquid gas to Poland and the region. A one-time shipment arrived last month.

Before heading to a public square in downtown Warsaw to address the Polish people, President Trump planned to highlight a regional effort to boost energy independence by meeting with a dozen central and eastern European leaders collectively known as the Three Seas Initiative.

The group of countries, all bordered by the Baltic, Adriatic and Black seas, aims to expand and modernize energy and trade with the goal of reducing the region’s dependence on Russian energy. President Trump also planned a separate meeting with Croatian President Kolinda Grabar-Kitarovic.

Later on Thursday, President Trump plans to deliver a speech from Krasinski Square, the site of a monument commemorating the 1944 Warsaw Uprising against Nazi occupation. Polish media reports said the government, as part of its invitation to President Trump, promised the White House a reception of cheering crowds. Plans call for ruling party lawmakers and pro-government activists to bus in groups of people from outlying provinces for the speech.

In his speech, President Trump plans to call on Poland and all of America’s European allies to stand united against extremism and other “shared enemies” that pose a threat to freedom and sovereignty — whether “from the South or the East,” according to excerpts of his speech released by the White House in advance.

The White House did not respond to requests for comment on those reports. Scores of people lined darkened streets late Wednesday after President Trump arrived to watch as the motorcade sped him to his hotel.

White House national security adviser H.R. McMaster said the president’s speech will praise Polish courage and celebrate Poland’s emergence as a European power. President Trump will also call on all nations to be inspired by the spirit of the Polish people as they confront today’s challenges.

“He will lay out a vision, not only for America’s future relationship with Europe, but the future of our trans-Atlantic alliance and what that means for American security and American prosperity,” McMaster said before the trip.

President Trump may also seek to use Poland as an exemplar of partnership.

Poland is one of five NATO members that spend at least 2 percent of their gross domestic product on the military, something President Trump and U.S. leaders before him have demanded of NATO allies. President Trump has scolded other NATO countries for falling short on their commitments.

Before President Trump arrived Wednesday, Poland’s government emphasized that Russia’s aggression in Ukraine poses a threat to the whole of Europe, an issue that inevitably will be raised in discussions with President Trump as Europeans seek to gauge his willingness to confront Putin before their first face-to-face meeting on Friday.

Poland also hopes President Trump’s visit will reinforce its position with European partners as it faces allegations of backsliding on democracy. The right-wing government is among three European Union countries — along with Hungary and Austria — that refuse to accept any relocated refugees, in legal violation of EU quotas.

President Trump has been working to curb refugee admissions to the U.S. as part of his ban on travel from six mostly Muslim countries.

The stop in Poland marked a break with tradition as U.S. presidents typically make a point of visiting stalwart allies like Britain, France and Germany in their opening months in office. President Trump will rectify that to some degree next week when he returns to Europe, this time visiting France at the invitation of President Emmanuel Macron to help celebrate Bastille Day and the 100th anniversary of the U.S. entry into World War I.