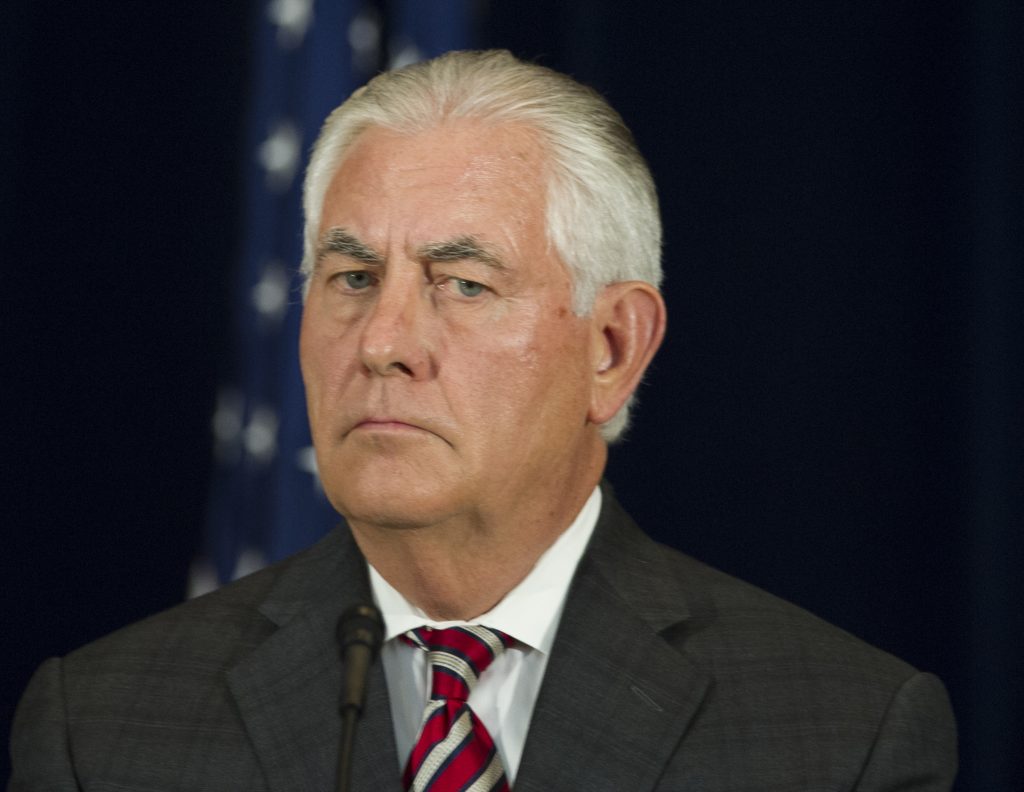 “Wayne Tracker” cannot be forced to testify under oath. He does not exist.

But the man who used the “Tracker” alias, U.S. Secretary of State Rex Tillerson, can be questioned — and is increasingly expected to be — as New York Attorney General Eric Schneiderman expands his sweeping probe into whether Tillerson’s former employer, ExxonMobil, misled investors about the impact of climate change.

Schneiderman’s office considers the nation’s chief diplomat a central figure in a case that pits the ambitious Democrat against a Texas energy giant and has divided attorneys general nationwide. Republican state prosecutors from South Carolina to Utah, like Exxon’s high-profile legal team, accuse the New York attorney general of abusing the power of his office to score political points with his liberal base on a politically explosive issue.

It remains unclear whether Schneiderman will ultimately force Tillerson to answer questions under oath, but he told The Associated Press he has the legal authority to question the secretary of state, who served as Exxon’s CEO until joining President Donald Trump’s administration.

“We haven’t gotten to the point where that’s necessary, but yeah, we have the legal right to conduct depositions. I don’t know that we’re going to have to get to Mr. Tillerson, but sure,” Schneiderman told the AP when asked whether he has the right to question Tillerson.

The New York attorney general’s nonchalant tone does not reflect the intensity of the case or his office’s expectation that it will likely lead to Tillerson. But in an investigation that has already spanned 18 months and forced Exxon to release roughly 3 million internal documents, the confrontation could be several months or even years away.

Schneiderman opened the Exxon investigation in November 2015, shortly after reaching a settlement with another fossil fuel giant, Peabody Coal. In that case, Schneiderman’s office determined that the coal company misled shareholders, regulators and the public about the company’s financial risks related to climate change.

Now, Schneiderman is using the subpoena power of his office to determine whether Exxon did the same.

After being forced to produce internal communications about the impact of climate change on its business, Exxon earlier this year acknowledged that Tillerson used the “Wayne Tracker” alias during email communications. The company says that the alias was created to help the former CEO avoid a flood of messages after environmental activists obtained his actual email address.

Most of the “Tracker” emails have been permanently deleted, Exxon says, citing the company’s regular practice of destroying emails after a certain period of time. Exxon officials testified that the company allowed several months of Tillerson’s emails to be deleted even after Schneiderman’s office flagged them for preservation.

For now, Exxon says that many of the messages can be retrieved by collecting emails from those he communicated with.

He cast Schneiderman as an ambitious politician stuck in a lengthy and expensive fishing expedition. For Schneiderman to conclude his yearslong investigation without bringing a formal lawsuit against Exxon, Wells said, would deeply disappoint Schneiderman’s liberal supporters before his 2018 re-election.

“This is not a normal investigation. It is a political witch hunt,” Wells told the judge. “They cannot clear Exxon. The attorney general cannot be in a position of clearing the largest fossil fuel oil company in the world.”

The position is backed by Republican attorneys general in 12 states, led by Texas Attorney General Ken Paxton, who filed a friend-of-the-court brief late last month in a related federal case brought by Exxon to try to block Schneiderman’s investigation. They argue that the attorneys general in New York — and Massachusetts, which is also probing Exxon — are abusing their power to prove a political point about climate change.

At the same time, Rep. Lamar Smith, R-Texas, is using his congressional subpoena power to seek documents from the New York attorney general’s office detailing communication with environmental groups. Smith also wants to depose Schneiderman himself, an order that the New York Democrat is ignoring.

In a statement to the AP, Schneiderman slammed efforts to “delay and distract” from the investigation and vowed to continue searching “for as long as it takes to get to the bottom of what really happened at Exxon.”

His office will depose nine Exxon witnesses in the coming weeks in a series of lower-level depositions in a chain that is ultimately expected to lead to Tillerson. The State Department declined to comment on Tillerson’s involvement in the Exxon probe. The secretary of state, nominated by the Republican Trump, has retained a private attorney to represent him in the matter.

The judge presiding over Schneiderman’s investigation, New York Supreme Court Justice Barry Ostrager, has been critical about both sides’ behavior.