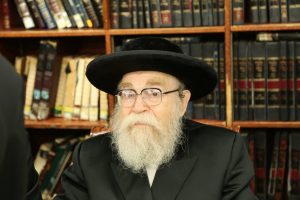 Harav Chaim Tzvi Segelbaum, zy”a, the Viener Rebbe of Flatbush, who inspired the many Jews who he drew close with his Torah, avodah and ahavas Yisrael, was niftar on Thursday 11 Tammuz. He was 77 years old.

For decades, the Rebbe led two shuls, in Flatbush and in Boro Park, both named for his hallowed forebear the Darchei Emunah of Sighet, zy”a.

He was born in 1940 in Makava Hungary. His father, Harav Yosef Yisrael, zt”l, had served as Rav in the famed “Schiff Shul” in Vienna and his mother, Rebbetzin Mindel, a”h, was a descendant of the Likutei Mahariach.

The family moved to the United States, settling in Boro Park, when Chaim Tzvi was a child. There he learned in the Satmar Yeshivah, where he quickly distinguished himself with great hasmadah and yiras Shamayim.

The Rebbe and his father, enjoyed a close relationship with the Satmar Rebbe, zy”a. Throughout his life, the Viener clung to the ways of Satmar and, despite a warm and gentle nature, he could not be budged from any minhag or shittah that he had received from the Satmar Rebbe.

He married Sarah Ostreicher of Bnei Brak, the daughter of Reb Kalman Ostreicher, z”l. They lived for a short time in Eretz Yisrael before returning to America and settling in Boro Park. In those years, the Rebbe supported himself with various business endeavors, all while spending countless hours toiling in Torah. From the time of his bar mitzvah, he accustomed himself to rise early in the morning and spend hours immersed in learning before davening Shacharis.

For the many years that the Rebbe led his batei medrash, he put great effort into befriending and giving chizuk to his mispallelim, inspiring many to strengthen their own connections to Yiddishkeit.

The Rebbe, together with, tbcl”c, his Rebbetzin, maintained an open home that was a refuge to many in need of a warm meal, a kind word, and, for many, even a bed to sleep in.

The levayah was held on Thursday afternoon, in both Boro Park and Flatbush. In accordance with instructions left by the Rebbe, there were no hespeidim. Kevurah was in the beis hachaim in Kiryas Yoel.