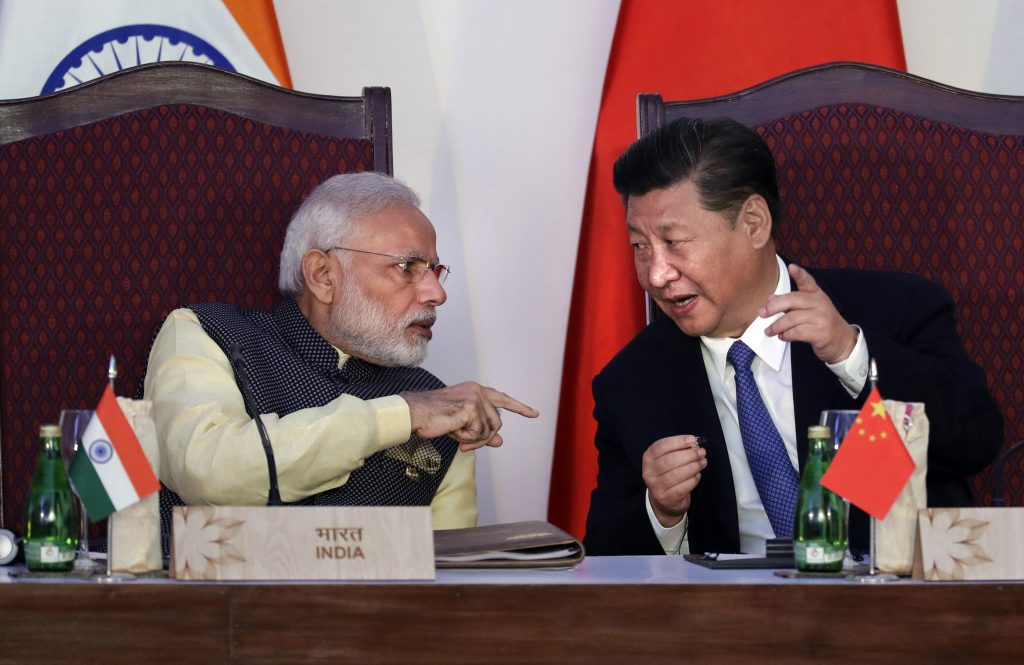 Their meeting is likely to be all smiles and polite handshakes, as world leaders look on. But as Indian Prime Minister Narendra Modi and his Chinese counterpart Xi Jinping left for Friday’s G-20 summit in Hamburg, tensions between the two rising Asian powers have escalated over a patch of disputed territory claimed by both China and the tiny Himalayan kingdom of Bhutan.

Border scuffles between India and China have simmered in the past, but analysts from both sides said the latest spat has the potential to spiral into conflict between the two nuclear-armed nations. So far, troops from the two countries, who are usually unarmed to avoid provocation, have engaged in what is known as “jostling,” when soldiers attempt physically to push rivals back.

The standoff began at the end of June, while Modi was meeting President Donald Trump, prompting some Indian analysts to wonder if the timing had anything to do with China’s disdain for India’s increasingly close ties to the United States.

The dispute started after Chinese construction trucks, accompanied by soldiers, rolled south in the disputed region of Doklam to build a road. India and Bhutan consider the region to be Bhutanese territory; China claims the land as its own. The countries disagree on the exact location of the “tri-junction,” where the three borders meet.

The argument bears some of the hallmarks of China’s efforts to fortify islands in the disputed South China Sea, where it has riled both the Philippines and Vietnam and risked confrontation with the U.S. Navy.

India and Bhutan have traditionally been close allies; India often provides the small country with financial and military assistance. It was the first country Modi visited after being elected.

Indian analysts say China’s move in Doklam threatens a narrow sliver of strategically important land, known as the chicken’s neck, which connects central India to its remote northeast. In response to what it believed was extraterritorial Chinese road-building, New Delhi sent reinforcements supporting Bhutan — according to ex-Indian army officals, at Bhutan’s request.

Chinese officials say that India’s intervention amounted to a provocation, violating an 1890 treaty with Great Britain that appears to grant China access to the region. According to Chinese foreign ministry spokesperson Geng Shuang, the pact was affirmed by Indian leaders after independence.

“As to the boundary negotiation between China and Bhutan,” he said Wednesday, “we have repeatedly stated that Doklam has always been part of China’s territory and under China’s effective jurisdiction without disputes.”

The government’s messages were bolstered by stern statements in China’s state-run press. The Global Times newspaper printed a furious editorial warning India of China’s military might. “The Indian military can choose to return to its territory with dignity, or be kicked out of the area by Chinese soldiers,” it read.

Wang Dehua, from the Shanghai Municipal Center for International Studies, said, “By continuing to increase deployment of troops at the border India once again underestimates China’s capability and determination to safeguard its territory. It also fails to estimate the cost of confrontation.”

Hopes for a discussion between Modi and Xi on the Doklam dispute on the sidelines of the G-20 summit were scuppered after Indian media reported the government had not requested a one-on-one meeting. Instead, Xi and Modi will meet among leaders from other G-20 countries, to discuss various international issues.

“China has taken a very stubborn attitude, and there is little appetite in India to accommodate China’s behavior,” said Patil.

Modi had come into office with high hopes of building Sino-Indian relations; experts say he was the most pro-China prime minister since independence. Xi met Modi in India in 2014 shortly after he was elected, in the first visit by a Chinese leader in eight years.

Instead, the two nations have become increasingly suspicious of one another. During Modi’s recent visit to the United States, a deal was struck to buy surveillance drones that could be used to monitor Chinese naval activity in the Indian Ocean. In April, China fulminated over the Dalai Lama’s tour of Arunachal Pradesh in northeast India, known in China as south Tibet. (China considers the Dalai Lama an opponent and a separatist whose power threatens its control over Tibet.)

India also refused to join China’s “One Belt One Road” program, a massive infrastructure project involving 70 countries aimed at reviving old Silk Road trade routes. Plans include an improved connection between China and Pakistan, and would allow Pakistan access to other countries in Central Asia.

China on the other hand blocked efforts to designate a Pakistan-based militant outfit, Jaish-e-Mohammed, as a terrorist organization. It has also stood in the way of India’s bid for membership in the Nuclear Suppliers Group, an organization of countries that supply – and control – the export of nuclear materials, equipment and technology.

China has billions of dollars in investment deals with Sri Lanka and Nepal, and this year took part in a joint military training exercise with the Nepalese. India considers both neighbors to be allies.

“I think the root cause is that the Chinese feel that their moment has arrived and that they do not need to accommodate Indian interests in any way, given the huge power differential in their favor,” said India expert Ashley Tellis, senior fellow at the Carnegie Endowment for International Peace. “Chinese suspicion that India was casting its lot entirely with the United States has only intensified Beijing’s determination to be even less accommodative towards New Delhi.”

Politically, neither Modi nor Xi can be seen to be giving in to the other’s demands. Modi’s nationalist government has insisted upon maintaining the integrity of Indian borders, banning maps and representations of disputed regions in the north. Xi, too, cannot be seen to be relenting to what the Global Times called “unruly provocations” from India, as he prepares to face a Chinese Communist Party conference in the fall.