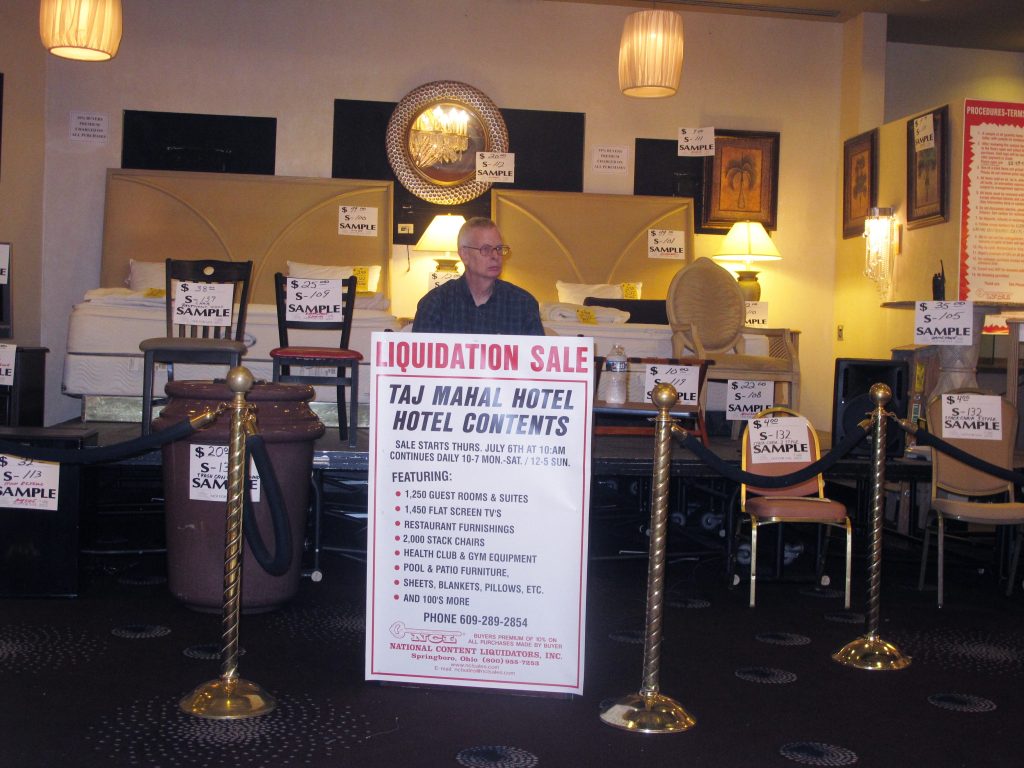 For some, it was The Art of the Steal.

But they weren’t gamblers. They were bargain hunters searching for rock-bottom deals at a liquidation sale of the contents of the ostentatious casino that Donald Trump built in 1990 as a monument to excess and glitz.

And while ornate crystal chandeliers from Austria that the future president and his first wife, Ivana, picked out for the casino were up for sale, more popular items included chairs and room furnishings.

Political junkies were likely to be disappointed: All items with the Trump name on them were removed from the casino before the sale began. (Sad!)

The three largest chandeliers above the main escalators cost $250,000 apiece when new; they were selling for $35,000 Thursday. And the seven smaller chandeliers in the lobby were already drawing interest at $7,500 apiece, marked down from $40,000.

“We actually have somebody from Texas that’s flying in here to take a look at them,” said Don Hayes of National Content Liquidators, which was conducting the sale. “He’s gonna put ’em all in his house!”

The company purchased the unwanted contents of the casino and hotel from Hard Rock International, which bought the shuttered property in March for $50 million, or about 4 cents on the dollar from the $1.2 billion Trump spent to open it.

It is then up to the liquidators to get whatever they can for the individual items. Hayes would not say how much the company hoped to make from the sale.

Trump cut most ties with Atlantic City in 2009, having lost control of the casino company in a bankruptcy. His friend and fellow billionaire Carl Icahn shut the Taj Mahal down last October amid a bitter strike with Atlantic City’s main labor union.

Maria Marine, of Egg Harbor City, New Jersey, an Atlantic City suburb, was on the prowl for pool and patio furniture. While waiting for the doors to open, she recalled the casino’s heyday.

“When this first opened, I couldn’t wait to see it,” she said. “The celebrity, the grandeur. Back in the ’90s, this was it. The gold standard.”

But by Thursday’s sale, some of the stock looked every bit like it had been on the job since 1990, including patio tables of varying sturdiness, bar chairs with the odd scratch or chip, and stainless steel circular tables with more than a dent or two.

One buyer snapped up the entire inventory of 30,000 bedsheets before the sale began. The only other things left in the room where they had been stored were two huge racks of hundreds of irons, each selling for $8.

“That’s an awesome price,” said Vinny Miguel, of Philadelphia, who picked up five of them. “I got a lot of family, and a lot of laundry.”