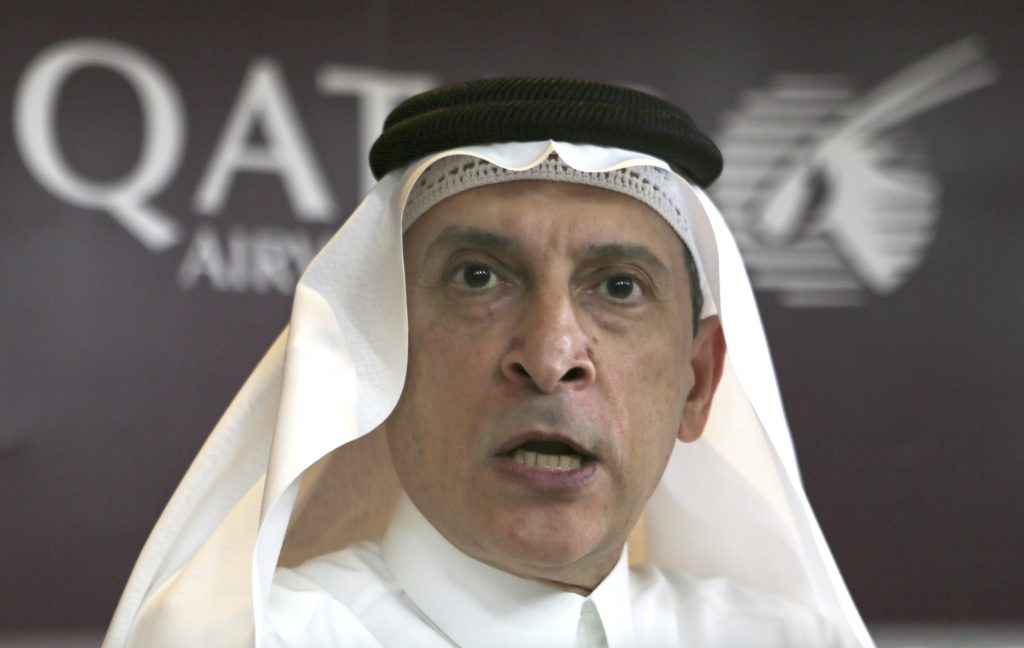 Qatar Airways ratcheted up a war of words with American Airlines over its plans to take a stake in the carrier, with Chief Executive Officer Akbar al-Baker saying his U.S. counterpart Doug Parker is “frightened” by the proposed investment.

The Mideast company intends to buy up American Air stock if it’s attractively priced regardless of opposition from Parker, who has dismissed the move as “puzzling at best and concerning at worst,” al-Baker said Thursday in his first public comments since news of the strategy emerged last month.

“We will not impose ourselves on anybody,” he said in Dublin. “However our filing is very well advanced, and we hope to start buying shares on the open market soon. We want to be a strategic shareholder. We’re not telling them what to do.”

The value that Qatari investment could bring to American will become apparent once the Mideast operator purchases the 4.75 percent stake it’s able to buy without seeking approval from the Fort Worth, Texas-based company’s board, al-Baker told reporters. There are no plans to go beyond a 10 percent holding and certainly not to the maximum 20 percent available to a foreign carrier, he said. Neither will there be an attempt to secure a seat on the board.

American Airlines didn’t immediately respond to a request for comment. Shares of the company traded 0.4 percent higher at $51.45 as of 9:40 a.m. in New York. They’ve advanced 6.2 percent since June 21, the day before it disclosed Qatar’s interest in buying a stake. That’s the biggest gain on a Standard & Poor’s index of five major U.S. airlines.

While Qatar Air and American are partners in the Oneworld global alliance and each counts British Airways as its closest global partner, with Qatar owning a 20 percent stake in BA parent IAG SA, the planned investment still came as a surprise given recent tensions between the two.

American Air and Parker have led calls from U.S. carriers to stem the expansion of the three biggest Persian Gulf operators, also including Dubai-based Emirates and Etihad Airways of Abu Dhabi, arguing that they have become global players thanks only to illegal state aid.

The Mideast majors say they’ve benefited from no more than seed capital many years ago and have become dominant thanks to a strategy of exploiting the Gulf’s position at a natural global crossroads to carve off a significant share of the most lucrative long-haul transfer traffic.

Al-Baker, in Dublin following the start of Qatar flights there last month, said he is “always ready to work with the devil” where doing so represents sound business, adding, “I always like to invest where I make money.”

The purchase of American Airlines stock would mark a fourth foray into overseas ownership for Qatar Air following its IAG deal, the acquisition of a 10 percent holding in Latam Airlines Group SA, the biggest South American carrier, and a planned 49 percent stake in minor Italian operator Meridiana Spa.

Parker’s comments on Qatar are really aimed at “placating his unions,” according to al-Baker, who said that it has become difficult for U.S. carriers to backtrack on their subsidy claims. He added, “You have already seen the statement from my dear friend Doug Parker, who is part of our alliance, who is now frightened of a Oneworld carrier wanting to take a stake.”

The move for American comes with Qatar Air’s state owner embroiled in a political dispute with Arab neighbors over support for Iran and alleged funding of Islamic terrorism.

Asked whether he was planning further investments, possibly in Europe, al-Baker said that “a general never lays down his battle plans in advance,” adding, “We have been successful in surprising people and we will surprise people again very soon.”