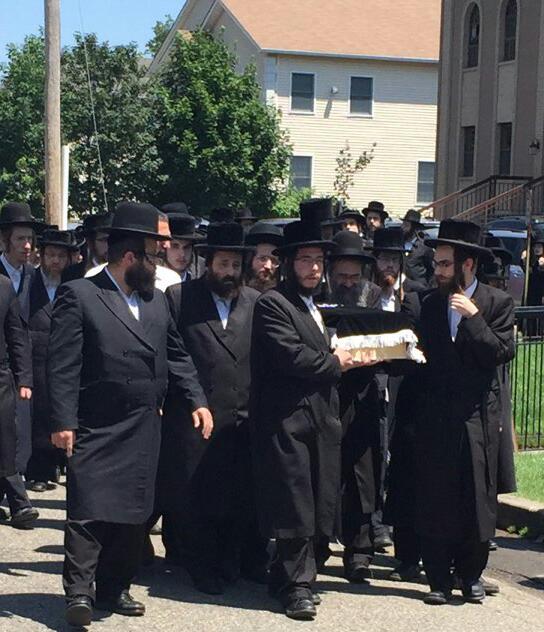 A 3-month-old Monsey boy was niftar Wednesday morning, 10 days after he was critically injured when a driver, enraged that a cabbie had cut him off, drove onto the shoulder and struck him, his mother and two sisters.

Yosef Meir Braun, z”l, passed away at Westchester Medical Center, where he had been treated since the June 26 incident along Robert Pitt Drive. The levayah took place Wednesday morning in front of Monsey’s Kollel Zichron Menachem, led by Harav Chaim Flohr.

Yosef Meir’s mother was brought to the levayah by Hatzolah. She and her two daughters are recovering at home. The older, 13-year-old sister was the final member of the family to be released from the hospital, coming home on Tuesday.

The first hesped was delivered by Reb Yisroel Neuman, the child’s great-grandfather, who sobbingly bemoaned the passing of “such a pure child, who was without sin.” He said that some kehillos have a minhag not to be maspid to avoid exaggerations. “But with such a young child,” he wailed, “whatever you say is true.”

When the father, Rabbi Yoel Braun, began to speak, the hundreds of attendees burst out in loud weeping.

“Even though there was a middas hadin and it hit very hard,” sobbed Rabbi Braun, a Maggid Shiur in a local Satmar yeshivah, “there was also rachamim.”

Aron Wieder, a Rockland County legislator who attended the levayah, told Hamodia that that moment electrified the beis medrash.

“When the father spoke there was no dry eye. Everybody listening just couldn’t take it,” Wieder said. “He was basically matzdik es hadin.”

The driver, 62-year-old Albert Gomez, has already been charged with several felony and misdemeanor counts for assault and reckless endangerment. Police are now considering upgrading the charges to include manslaughter. He remains in jail on $150,000 bail.