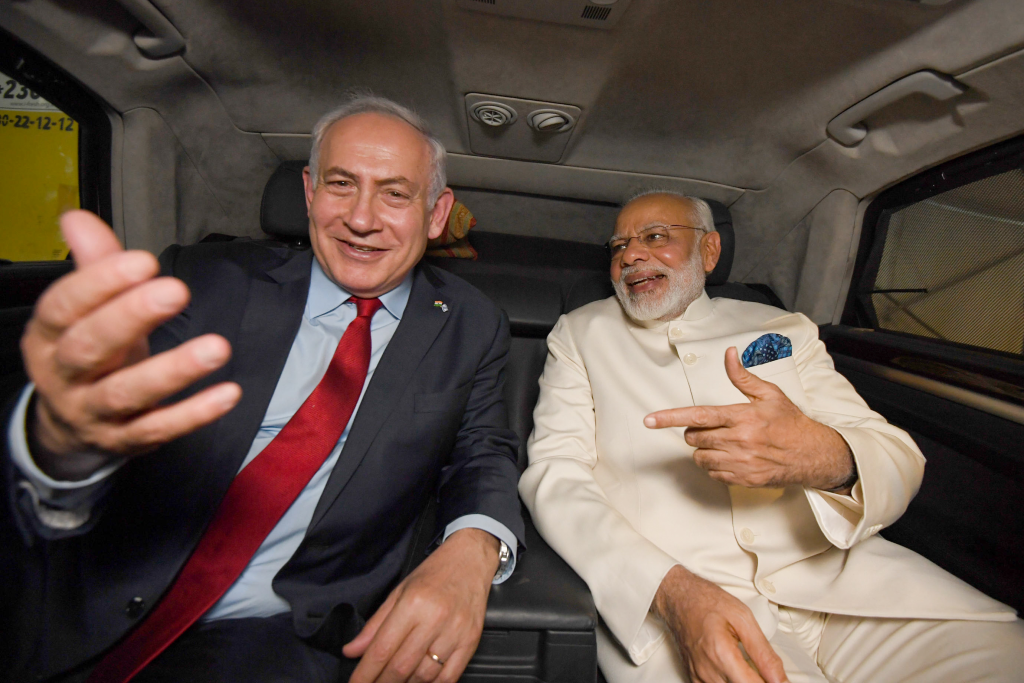 India’s Prime Minister Narendra Modi landed in Israel on Tuesday afternoon and was received by Israel’s leadership with enthusiasm and great warmth.

“Today, I begin a special and historic visit whose goal is to strengthen the ties between India and Israel,” Modi said on arrival at Ben Gurion Airport.

The high-profile visit celebrates 25 years of bilateral diplomatic relations, which have been flourishing under Modi’s premiership.

Prime Minister Binyamin Netanyahu greeted Modi at the airport and will accompany him throughout his three-day visit. Israeli officials say the warm treatment goes well beyond diplomatic protocol and reflects the importance of the visit.

“Prime Minister, we’ve been waiting for you a long time. We’ve been waiting almost 70 years, in fact, because yours is truly a historic visit. It’s the first time an Indian Prime Minister is visiting Israel. We receive you with open arms. We love India. We admire your culture, we admire your history, your democracy, your commitment to progress. We view you as kindred spirits in our common quest to provide a better future for our peoples and for our world.

“Prime Minister, when I first met you at the United Nations three years ago, we agreed to break down the remaining walls between India and Israel. We shook each other’s hands and we agreed to forge a historic partnership for progress. We then met again in Paris and since then we’ve spoken many times on the phone. I remember, my friend, what you said in that first meeting. You said that when it comes to India-Israel’s relations, the sky is the limit.

“But actually, my friend, the sky isn’t the limit because today even our space programs are working together to achieve even greater heights. The ties between our talented, innovative peoples is natural. It’s so natural that we could ask what took so long for them to blossom? Well, it took a meeting of minds and hearts, it took a commitment of our governments. We have that today. On this visit, you’re making India Initiative meet my

‘Make with India’ policy. We’re setting up a 40 million dollar innovation fund as the seed for even greater cooperation on technology between us.

“Our partnership extends to water, agriculture, security, energy, and many other fields. I believe the formula for success is simple: It’s I2 T2. That equals – Indian talent times Israeli technology. It equals Israel-India’s ties for tomorrow. I2 T2. This is the degree of mathematics I remember from my student days, but I’m confident of the real mathematics of life.

“I’m confident of the success of our partnership for many reasons: First, is the talent of our peoples. It’s been said, Prime Minister, that in Silicon Valley in California the two most common languages overheard are Hindi and Hebrew. Occasionally, one hears some native English too. Second, I believe in the success of our partnership because of the great sympathy between our peoples – the natural comradery between Indians and Israelis.

“The Jews of India and the 100,000 Israelis of India descent are a wonderful human bridge between our two nations, our two peoples. Third, I’m confident of our success because of leadership.

“Prime Minister Modi, you are a great leader of India and a great world leader. Your visit to Israel is a testament to that. Our two peoples have deeply held values rooted in ancient cultures, yet we both seek to realize the promise of a better future. I know, and this visit marks that very clearly, that we can do even more, even better together.

Modi responded, saying “It is a great honor for me to be the first prime minister of India to come to Israel,” said, and then repeated the words in Hebrew.

After the welcoming ceremony, Modi and Netanyahu motored together to the Danziger Flower Farm at Mishmar Hashiva, where they were accompanied by Agriculture Minister Uri Ariel.

“The Volcani Institute, which does a lot of this research, I think it’s the most advanced agricultural research institute in the world,” Netanyahu told his guest. “I’d say none is more advanced. That’s the way I would say it to be sufficiently humble. But, these people are doing remarkable things and you can increase the productivity of crops, of irrigation, of soil, livestock, with the kind of groundbreaking research that they’re doing. One thing you haven’t resolved is how to bring down the temperature in a greenhouse. It’s too costly.”

The Danziger Farm named a variety of white chrysanthemums after Prime Minister Netanyahu and Indian Prime Minister Modi in honor of the historic visit.

The two leaders then visited Yad Vashem, where they toured the Hall of Names and the Children’s Memorial and participated in a memorial ceremony in the Hall of Remembrance.

On Tuesday evening, Netanyahu and his wife Sara hosted Modi at the Prime Minister’s Residence in Yerushalayim.