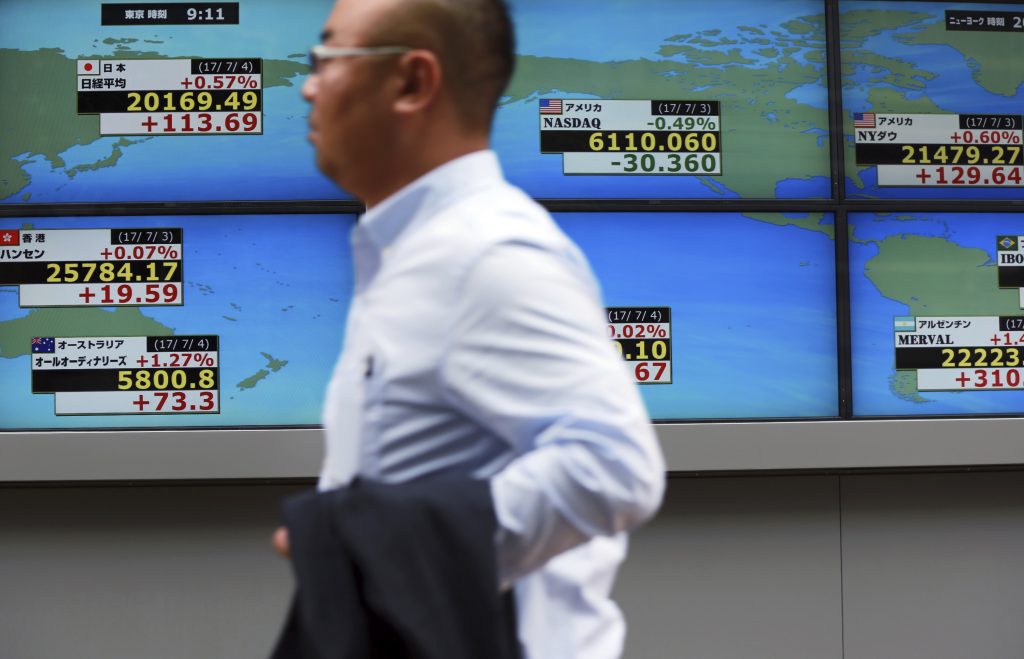 Asian shares turned lower on Tuesday as earlier gains were quashed by tensions on the Korean peninsula after North Korea fired a missile that landed in Japanese waters, deepening concerns over the isolated nation’s nuclear capabilities.

European shares were also set to open in the red, with financial spreadbetters expecting Britain’s FTSE 100 and Germany’s DAX to start off 0.2 percent each, and France’s CAC 40 down 0.3 percent.

North Korea test-launched an intermediate-range ballistic missile on Tuesday, South Korean and U.S. officials said, days before leaders from the Group of 20 nations are due to discuss steps to rein in Pyongyang’s weapons programs.

Tokyo strongly protested what it called a clear violation of U.N. resolutions, and Japanese Prime Minister Shinzo Abe said he will ask the presidents of China and Russia to play more constructive roles in efforts to stop Pyongyang’s arms program.

“As concerns surrounding the firing of ballistic missiles brewed midday, we are seeing the slide in the Japanese market spreading across to the rest of Asia,” said Jingyi Pan, market strategist at IG in Singapore.

“Reports suggesting that the missile had landed in Japan’s Exclusive Economic Zone certainly bring about deeper concern compared to past instances.”

Australian shares bucked the trend to surge 1.6 percent, bouncing solidly from a 2.3 percent loss over the previous two sessions, helped by the nation’s central bank steering a neutral course on rates in contrast to some of its peers who have recently turned more hawkish.

The broad Asian share market performance was in stark contrast to the overnight increases in European and U.S. shares, with oil’s longest stretch of daily price gains in over five years boosting energy shares.

The S&P 500 index and the Dow Jones Industrial Average posted gains of 0.2 percent and 0.6 percent, respectively, led by financials and energy shares. The Nasdaq lost 0.5 percent, as the rotation away from technology names continued.

An error in Nasdaq’s computer systems on Monday evening in the U.S. caused some third-party providers to incorrectly show large after-hours swings for the prices of Amazon Inc., Microsoft Corp. and Apple Inc. shares. Google parent Alphabet Inc. and eBay Inc. shares were among others that appeared to be priced at $123.47 on some financial news websites.

The actual prices of the stocks were not affected and no trades were completed at that price, a Nasdaq spokesman confirmed.

U.S. markets are closed on Tuesday for the independence day holiday.

European markets posted even stronger gains, with the FTSEurofirst 300 jumping as much as 1.2 percent following losses last week.

In currency markets, the dollar index, which tracks the greenback against a basket of trade-weighted peers, was steady at 96.23.

On Thursday, it jumped 0.6 percent after a private index of June domestic manufacturing activity rose more than expected while other data showed government outlays on construction projects in May at their highest in more than four years.

“Expectations towards the Federal Reserve hiking interest rates later this year had perhaps sunk too low,” said Shin Kadota, a senior strategist at Barclays in Tokyo. “We are now seeing such lowered expectations being reversed a little.”

The Australian dollar slid 0.65 percent to $0.7609 after the Reserve Bank of Australia’s neutral outlook on rates disappointed speculators betting it would join other global central banks that have recently turned hawkish.

Sterling inched up 0.1 percent to $1.295, but failed to make up most of Monday’s 0.7 percent loss after poorer-than-expected data from Britain’s manufacturing sector.

Crude futures posted their first session of losses in nine, ending their longest run of gains since February 2012, as traders closed positions ahead of the U.S. holiday.

Global benchmark Brent also fell 0.5 percent to $49.44. On Monday, it closed up 3.7 percent, its biggest one-day gain since December 2016. Gold inched up from its lowest level in more than seven weeks hit on Monday on the dollar’s strength. Spot gold was up 0.3 percent at $1,224.49 an ounce on Tuesday.