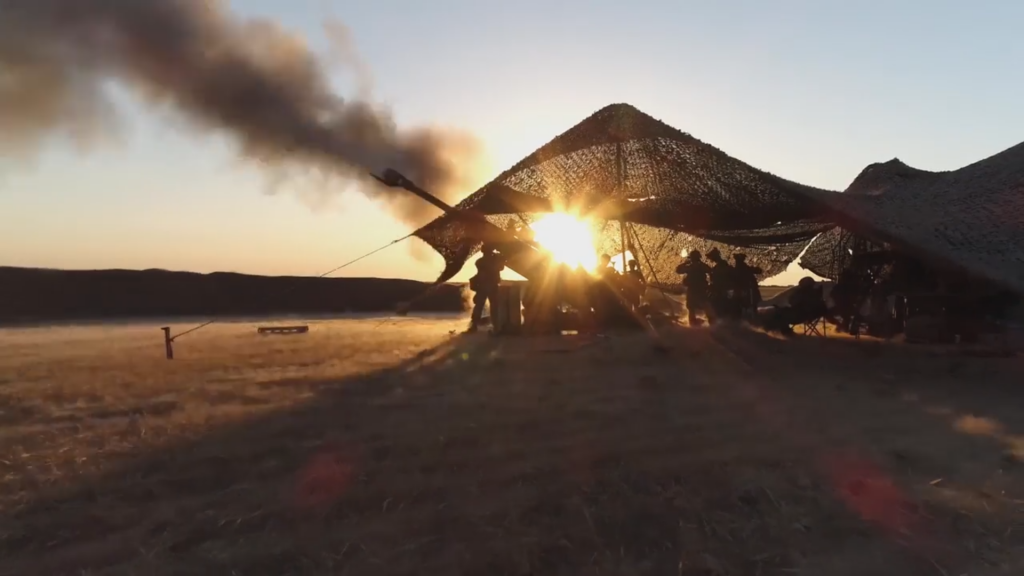 A U.S. Marine artillery unit in Syria is using a highly specialized guidance kit for its ammunition, a video posted to a Pentagon-run website shows. It appears to be the first time the equipment has been spotted with U.S. forces in a combat zone outside of Afghanistan.

The two-minute-long video was uploaded late last month and appears to be shot primarily by drone. One frame shows an M777A2 howitzer with a row of 155mm artillery shells nearby. Two of the shells appear to be equipped with the XM1156 Precision Guidance Kit, a type of fuse that is screwed into the top of a standard 155mm high explosive artillery shell that subsequently turns it into semi-precision-guided munition.

The farther a howitzer is away from its intended target, the less accurate standard shells become. This is called the circular error probable or CEP. This means at around 18 miles (the maximum range of a standard 155mm artillery shell fired from a M777A2 howitzer), half the rounds fired could land within an 853-foot circle around the target. The XM1156 reduces that circle to just shy of 100 feet, according to Army documents.

The XM1156 appears to have first popped up in Afghanistan in 2013; and in 2015, according to a report from Defense News, Orbital ATK was awarded a $120 million contract by the U.S. Army for the guidance kits. Canada and Australia has also experimented with them.

The U.S. military also fields other types of guided artillery shells, the XM982 GPS-guided Excalibur. The Excalibur increases the range of the M777A2 to roughly 25 miles.

The Marine artillery unit, though unnamed in the video, probably came from the 24th Marine Expeditionary Unit. The howitzer battery is providing fire support — along with guided rocket artillery — to U.S.-backed Syrian fighters battling the Islamic State in their de-facto capital of Raqqa. Open-source imagery has geo-located the Marine artillery within 10 miles of Raqqa, meaning that even the unguided shells fired from the unit’s howitzers will land somewhat accurately depending on weather.

Though the XM1156 is meant to reduce civilian deaths and unnecessary damage to civilian structures, the U.S. military has been accused of causing hundreds of civilian casualties in Raqqa in recent weeks. Last month, videos appeared online of what looked like M825-series white phosphorus smoke shells bursting over the Syrian city, setting some structures ablaze. Those type of shells appeared in the recent video posted online and have also been documented in prior images circulated by the Pentagon.