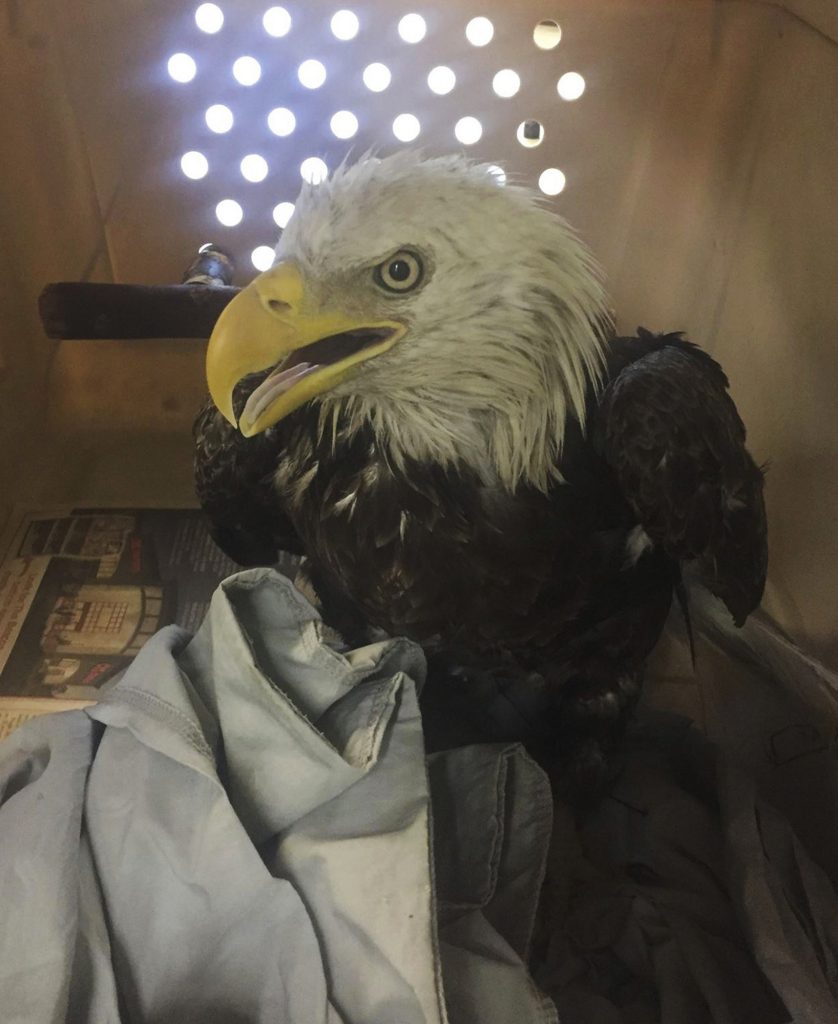 An injured bald eagle here — likely Liberty or Justice, who have made their home at a D.C. police academy for more than a decade — was treated at City Wildlife on Monday after being found Saturday following a thunderstorm.

Based on its weight and talon size, the injured bird is likely Justice, the male of the beloved pair, said Dan Rauch, a wildlife biologist with D.C.’s Department of Energy and Environment.

It is not possible to definitively determine the injured bird’s identity because neither eagle is tagged, but the location where it was found — near Eighth and Xenia streets SE, approximately 1.5 miles from the police academy — means it is likely that the injured bird is Justice, Rauch said.

The bird has no obvious fractures or other signs of trauma, said Kristy Jacobus, the clinic director at City Wildlife, after she completed an examination Monday morning. It was alert during the examination, yellow eyes bright and pink tongue out as it panted from the stress of human contact, and let out a few squeals as Jacobus felt along its wings and feet for injuries.

The eagle was found around 4:45 p.m. Saturday, following intense rain that came with an afternoon thunderstorm. It will be taken to a center in Delaware for further examination and a full X-ray and returned to D.C. once it has been cleared, Jacobus said.

In 1972, when the insecticide DDT was banned, there were 600 bald eagles in the Lower 48 states. Today, there are more than 16,000 eagles in the United States, Rauch said, but only two known nests in D.C. The other, at National Arboretum, is home to a pair of birds named Mr. President and First Lady, who welcomed the births of eaglets Honor and Glory in March.

Liberty and Justice’s eaglet, which hatched March 15 and is named Spirit, took its first flight in early June and is likely living and hunting on its own, Rauch said. If Spirit had still been in the nest and one of the baby eagle’s parents had been injured, it would have been in danger.

“It takes two parents to care for a nest, so we could have had a failed nest,” Rauch said. “The injury could have been worse, timing-wise.”

Adult eagles can survive on their own, so if Justice is the injured eagle, Liberty will be safe until his return, Rauch said.

The bird is the first bald eagle that City Wildlife has treated in the four years since it opened. It is also the largest avian — weighing in at nine pounds — that the center has handled. The next largest bird was a snowy owl that was treated in January after being hit by a bus.

Before City Wildlife opened its doors in 2013, injured animals were taken to Second Chance Wildlife Center in Gaithersburg, Md. Now, City Wildlife treats everything from orphaned opossums to injured squirrels to snakes — a corn snake was brought in as the eagle was being prepared for examination — in its center on Oglethorpe Street NW.

During intense storms, water can get under the feathers of bald eagles, weighing them down and making it likely they’ll be grounded, where birds are most vulnerable.

“Every spring when there is a thunderstorm, we put our heads under our pillow and go, ‘let us not get our first eagle,'” said Paula Goldberg, the center’s executive director. “There’s a mixture of excitement and dread.”