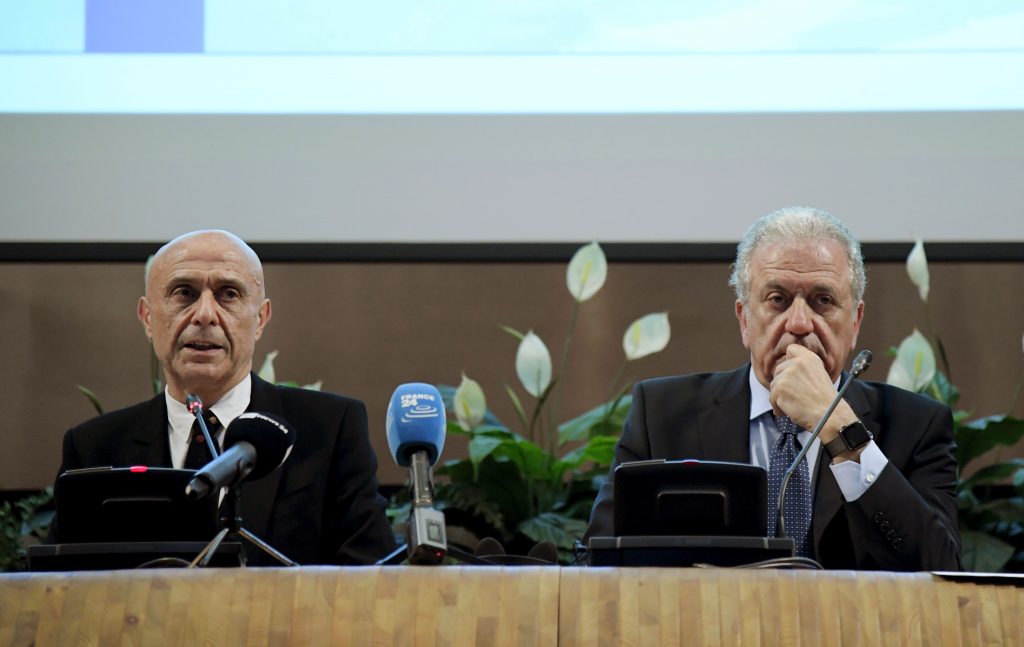 The interior ministers of France and Germany agreed on new measures meant to help Italy as it struggles to cope with rising migrant arrivals, pledging to boost support for the Libyan coast guard and speed up their relocation under a European Union accord.

At a dinner on Sunday in Paris with interior ministers Gerard Collomb of France, Thomas De Maizière of Germany, Marco Minniti of Italy, and EU Migration Commissioner Dimitris Avramopoulos, “strong solidarity with Italy” was expressed, according to a joint statement on the website of the Italian interior ministry.

The participants agreed to draw up a code of conduct for non-governmental organizations to improve coordination with them in the Mediterranean. They undertook to reinforce support for the Libyan coast guard, strengthen controls on Libya’s southern border, and speed up implementation of a EU scheme to relocate migrants from Italy to other European countries.

European partners will consider these measures at a meeting of EU interior ministers in the Estonian capital Tallinn on July 6-7.

Italian Prime Minister Paolo Gentiloni said in a speech at the U.N. Food and Agriculture Organization in Rome on Monday that he hoped for concrete progress on EU partners helping his country cope with migrant flows. His government is asking the bloc to share the burden “which is necessary for Italy to avoid the flows becoming unsustainable, fueling hostile reactions within our social fabric.”

According to a study published on Monday by the U.N. High Commissioner for Refugees, many migrants from neighboring countries travel to Libya believing they can find jobs there “but end up fleeing onwards towards Europe to escape life-threatening dangers and difficult economic conditions plus widespread exploitation and abuse.”

Gentiloni said on June 29 that Italy needed the help of the EU after 10,000 migrants were rescued off its southern coast in one week alone. “Italy is a country under pressure that’s asking our European allies to make a tangible contribution,” Gentiloni said at a joint news conference with leaders including Germany’s Angela Merkel and France’s Emmanuel Macron in Berlin after talks to prepare the Group of 20 nations summit in Hamburg on July 7-8.

Italian officials have threatened to bar entry to Italian ports of non-Italian ships carrying migrants picked up at sea, and have suggested rescued migrants be taken straight to other EU countries. According to the Italian Interior Ministry, 83,360 migrants landed on the country’s coasts between January 1 and June 30 this year, compared with 70,222 in the same period last year.