Regional All Aboard: New Ferry Puts Out Call for Deckhands
Regional 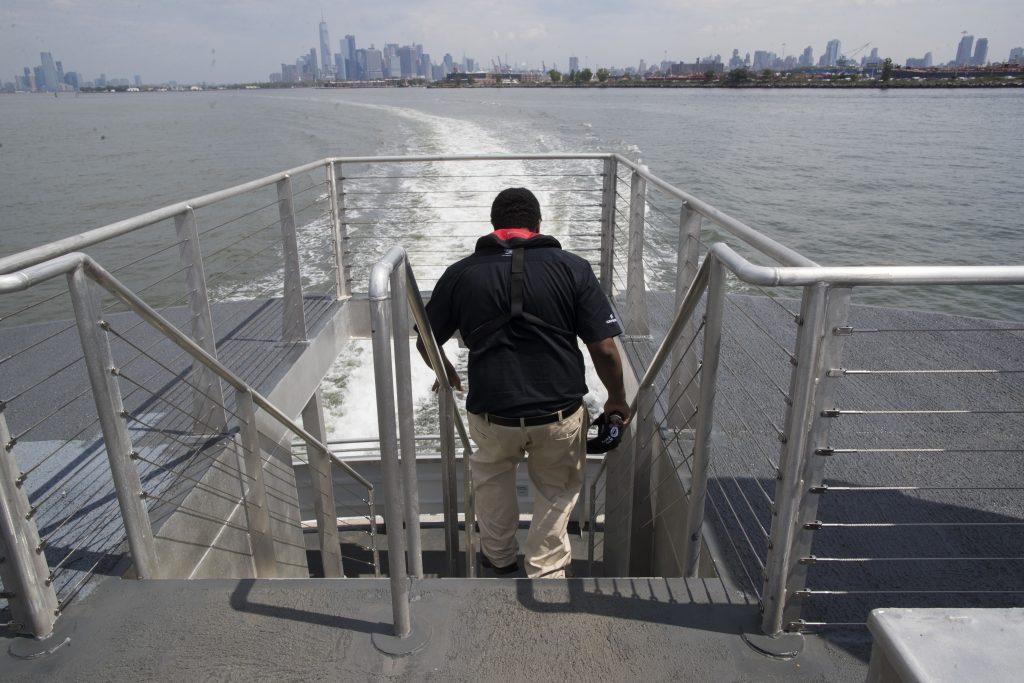 Winslo Edwards’ new office is on the shimmering waterways around New York City, his backdrop its sweeping skyline, his job title: deckhand.

Edwards, a 55-year-old Brooklyn man who had been struggling since he was laid off as a transit worker five years ago, was lured by the chance to work on the city’s new fleet of high-tech ferries, especially since it required no maritime experience, only a high-school diploma, people skills and ambition for advancement.

“This is my second chance in life,” Edwards said. “I knew I was able to meet the requirements. I’m young at heart, and young in mind. And I’m in good shape.”

Also among the novices is Pierce Collazo, a 28-year-old Army veteran of Iraq from Jacksonville, Florida, who had been kicking around odd jobs for years until he heard about the call for deckhands. It wasn’t the $15-an-hour pay or the steady health insurance that drew him in, but the chance to move up in the ranks.

“Finally, I decided to come to New York and look for a real opportunity,” he said.

About 80 deckhands will be working by August for the first wave of a 20-boat, six-route fleet linking Manhattan and waterfront neighborhoods in Brooklyn, Queens and the Bronx.

NYC Ferry is Mayor Bill de Blasio’s $335-million attempt to ease New York’s overcrowded and deteriorating public transportation system. Three routes are up and running now, with the one more to be added in August and two more by next summer, with a goal of at least 4.6 million rides a year.

On Edwards’ first day in May, he boarded a ferry at 5:30 a.m. on a Manhattan pier for the East River route to Brooklyn.

“I was hand in hand with the captain, signaling that the coast was clear,” he said. “It was an exhilarating position.”

Hornblower is the San Francisco-based company that operates the New York ferries and plans to employ at least 100 deckhands by next year. The company was looking specifically for people with ambition, noting that some of the company’s top executives were people who rose up from the humblest of jobs.

In orientations for new deckhands, “the first question I always ask the group is, ‘How many people want to become a captain?’ said Rich Paine, NYC Ferry’s head of training. “And almost every time … 99 percent of the entire class puts their hands up.”

Weeks of hands-on training on the decks include lessons on how to dock and undock at ferry, ensure passenger and crew safety, including responding if someone falls overboard. In case of an accident or a fire, deckhands also must know how to use extinguishers and life preservers.

And they train to perform less dramatic tasks, such as securing bicycles, scooters and surfboards, making sure the bathrooms are working, collecting boarding tickets and giving customers directions once they’re on land.

“They are very, very serious about the safety standards, and about helping passengers,” Collazo said. “And if you do well at entry level, you’ll definitely move up.”

It’s not an easy job. Collazo leaves home in the middle of the night for a shift that starts at 5:15 a.m. Daytime work begins at 2 p.m. and ends close to midnight, followed by the subway ride home to the Rockaways that can take up to two hours.

“We like to call it a life of controlled chaos,” Collazo said, laughing. “But I enjoy the job.”