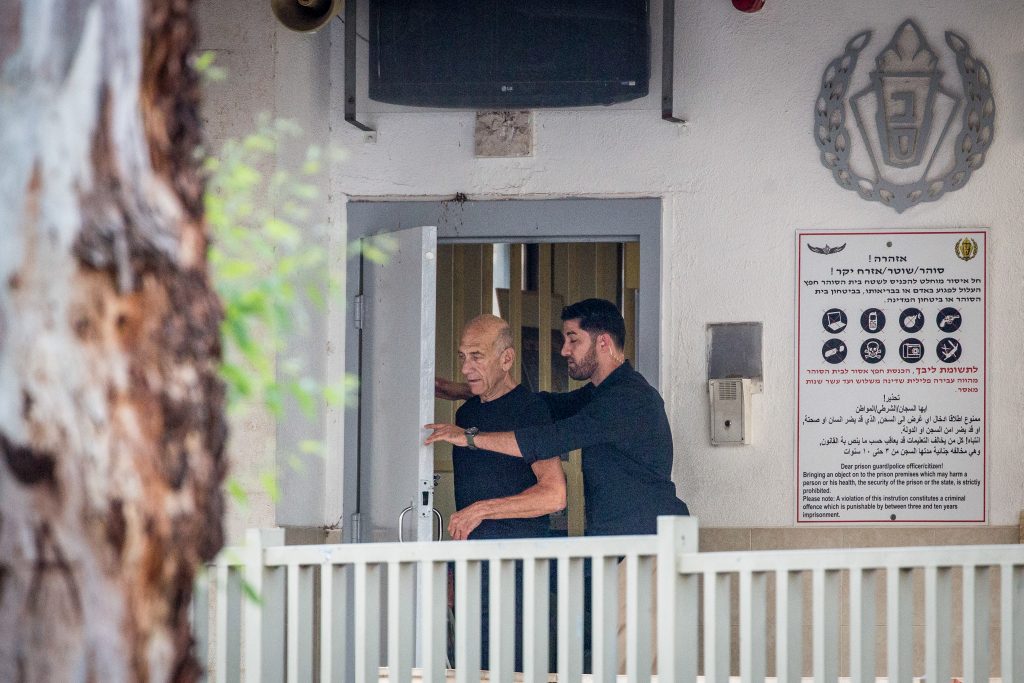 After 16 months in prison, former Prime Minister Ehud Olmert, 71, made his way to his home in north Tel Aviv as he left the prison cell that had been his home for the past year and a half. Olmert was released early, after a parole board last Thursday knocked off a third of his original 27-month sentence due to Olmert’s poor health and good behavior in prison. The path for Olmert’s release was cleared after prosecutors declined to appeal the decision.

Dozens of people were gathered outside Olmert’s home Sunday morning in the village of Motza outside Yerushalayim, awaiting his return, with many holding signs expressing support for him. Olmert never showed up, instead going to another home of his in Tel Aviv, but supporters told Channel Ten that “many other politicians are walking around free and are guilty of far more than he was. This country has lost a great leader.” Some members of the crowd expressed a desire to see him return to public service. It is unlikely that Olmert will be able to seek high office again, however, as individuals convicted of corruption crimes are generally banned from serving as ministers in the government.

Olmert entered prison in February 2016 after being convicted for his role in the Holyland construction project scandal. A plea for clemency was turned down by President Reuven Rivlin earlier this year.

Although now a private citizen, Olmert is still on parole, and he is required to report to police once every two weeks. He cannot leave the country without a special permit, and he will be doing public service work twice a week. According to Channel Ten, Olmert will be working at Leket Yisrael, a group that helps collect food for needy families, and Ezra Lamarpeh, which provides assistance to families with a loved one in the hospital.

In recent days, there has been a wellspring of support for the release of Olmert, based on what appears to be his poor health. Numerous government officials, including Education Minister Naftali Bennett, said that Olmert should be released, both for his own good and the good of the country. “It’s time to release Olmert, and I say this despite my political differences with him,” said Bennett. “There is no debate about the contribution he made to Israel’s security as prime minister.” A widely circulated photo leaked from the prison several weeks ago purports to show an anemic Olmert who, from the photo’s appearance, has seriously deteriorated during his time in prison.

An echocardiogram conducted on Olmert, who was hospitalized at Sheba Medical Center in Tel Hashomer last month, showed that he did not suffer a heart attack, but that without proper treatment he remains at risk for one.

Justice Minister Ayelet Shaked welcomed Olmert’s release, telling Army Radio he deserved to have his sentence reduced and that “all in all his behavior in prison was very good.”