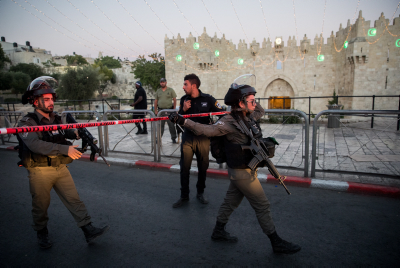 Police on Sunday released for publication the arrest of another Yerushalayim Arab involved in the murder of Border Guard Hadas Malka, Hy”d. The 52-year-old detainee is accused of driving the three terrorists who carried out the murder of Malka from the Ramallah area to Sha’ar Shechem (the Damascus Gate), where Malka’s murder took place.

The detainee is one of several arrested in the murder of Malka, which took place on June 16. Three terrorists from the village of Dir Abu Mashal, near Ramallah – Bara Ibrahim Muhammad Saleh, 19; Adel Hassan Ahmad Anakush, 18; and Osama Ahmad Mustafa Atta, 19 – have been arrested for carrying out the murder, as were the parents of Saleh. His mother has spoken out in Arabic media of the need for a new intifada, and how other young Arabs should attack Israelis as her son did, of encouraging terrorists to carry out attacks. His father had given several interviews praising the terrorists’ actions. Both are to be brought before a court Sunday for an extension of their remand.

The latest detainee was a “regular” on the Yerushalayim-Ramallah route, carrying illegal Arab workers into Israel for work purposes. The three terrorists were part of such a group, and the driver is said to have had prior knowledge of their intentions, officials said.