FOCUS: Travel Ban Was On, Then Off. Now It’s Back, but Different

By Alicia A. Caldwell

President Donald Trump’s first, temporary ban on travelers from seven majority-Muslim nations was short-lived, but it sparked confusion, panic and anger that lasted through months of court rulings. The Supreme Court will now take up the case in the fall. In the meantime, the government can enforce parts of a second version of Trump’s order.

So what’s new this time?

Old order: Three-month ban on citizens from seven Muslim-majority countries, including those who had valid visas but were outside the United States when the ban was signed.

Supreme Court version: Iraq has been dropped from the ban. 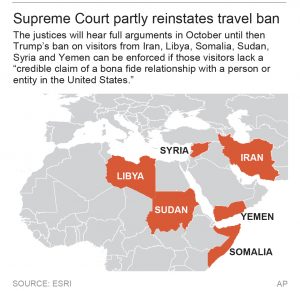 For 90 days, the government can bar new visa applicants from Syria, Sudan, Somalia, Yemen, Iran and Libya who can’t prove they have a “bona fide relationship” with close relatives or a business in the United States. The State Department says valid relationships include a parent, spouse, fiancé, child, adult son or daughter, son-in-law, daughter-in-law, sibling already in the United States. Journalists, students, workers or lecturers who have valid, formal invitations or employment contracts in the U.S. will also be welcome.

Refugees hoping to come to the United States who aren’t already approved for travel must now also prove one of these relationships. Otherwise, they’ll be barred for 120 days.

Supreme Court version: Syrians will be treated in the same manner as citizens of the other five designated countries.

Supreme Court version: The refugee ban will be in place for 120 days. But refugees already vetted and approved for travel through July 6 will be allowed to move to the United States. The “bona fide relationship” standard applies after a cap of 50,000 refugees that Trump set for the fiscal year is met. That is likely to happen soon. The new rules will likely affect refugees in the next fiscal year, which starts in October. The Supreme Court will hold a hearing on the ban that same month.

Old order: The Jan. 27 order was immediately put into place, causing chaos and panic at airports as the Homeland Security Department scrambled to figure out who was covered by the order and how it was to be implemented.

Supreme Court version: It went into effect at roughly 8 p.m. Eastern time Thursday, more than 72 hours after the Supreme Court issued its opinion.