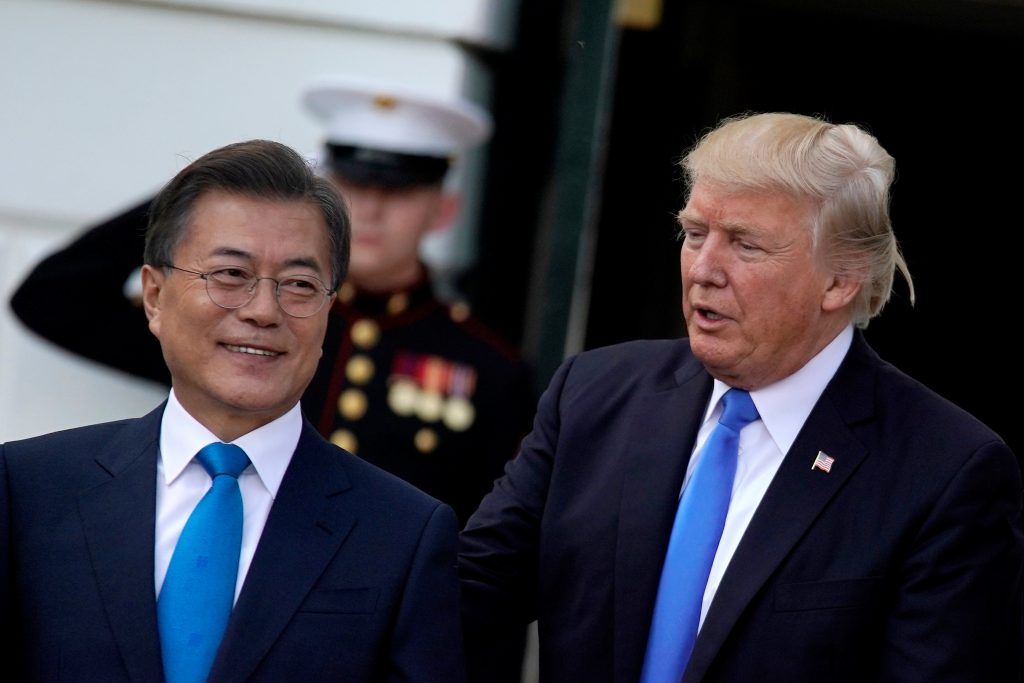 President Donald Trump will press South Korean President Moon Jae-in to solve trade differences over cars and steel in meetings in Washington focusing on the nuclear threat from North Korea.

Concerns about the U.S. military’s THAAD missile defense system and China’s role in the region also are likely to come up in talks between President Trump and President Moon at the White House.

President Moon, making his first trip to the United States since becoming his country’s president in May, joined President Trump for dinner in the White House State Dining Room on Thursday evening ahead of further talks on Friday.

“I know you’ve been discussing with our people some of the complexities of North Korea and trade and other things, and we’ll be discussing them all as we progress, and it could be very well late into the evening,” President Trump told President Moon.

“I’d like to also congratulate you upon your election victory. It was a great victory, and you did a fantastic job. A lot of people didn’t expect that, and I did expect it. I thought that was going to happen.”

Both men have an interest in building a strong relationship but tensions could puncture that effort.

President Trump has spoken harshly about U.S. trade imbalances with South Korea and threatened to tear up a trade agreement with the country. President Moon has taken a wary stance on the Terminal High Altitude Area Defense (THAAD) system that the United States deployed in South Korea in March.

“I think they’ll have a friendly and frank discussion about the trade relationship,” a White House official told reporters on Wednesday, noting concerns about barriers to U.S. auto sales and surplus Chinese steel that arrives in the United States via South Korea.

After the dinner, President Trump tweeted that he had a “very good meeting” with President Moon and that “many subjects [were] discussed including North Korea and [a] new trade deal!”

In an interview with Reuters in April, President Trump called the 5-year-old trade deal “horrible” and said he would either renegotiate or terminate it.

During remarks at the U.S. Chamber of Commerce on Wednesday, Moon said unfair trade practices would be eradicated and factors that limited competition, such as market entry barriers and price regulations, would be re-evaluated under his administration.

President Trump has made the challenging of trade agreements a hallmark of his administration since taking office in January.

Despite tensions over that issue, his meetings with Moon are likely to focus largely on North Korea.

President Moon has said he wants to form a friendship with the U.S. president and find common ground on how to resolve the crisis over North Korea’s nuclear and missile programs.

President Trump wants to build ties with an important new leader in the region as he grows frustrated that his relationship with Chinese President Xi Jinping has not resulted in stronger action by Beijing to rein in Pyongyang.

The United States on Thursday imposed sanctions on two Chinese citizens and a shipping company for helping North Korea’s nuclear and missile programs and accused a Chinese bank of laundering money for Pyongyang.

The Trump administration also announced that it plans to sell Taiwan about $1.42 billion in arms.

Moon told Reuters in an interview last week that he wanted to discuss a two-phased approach to resolving the North Korean nuclear issue, starting with a freeze on North Korea’s nuclear and missile development followed by complete dismantlement.

“I am planning to have frank and open discussions with President Trump on the step-by-step approach,” he said.

The THAAD defense system could be a sticking point.

Moon, who has advocated a more moderate approach toward Pyongyang, expressed shock late last month upon learning that four more launchers for the controversial system had been brought into the country. He ordered an investigation after his Defense Ministry failed to inform him of the move.

The system, whose installation irritated China, is meant to counter the threat from North Korea’s missile program. The White House said it did not expect THAAD to be a major point of conversation and Moon is expected to assure Washington that his recent decision to postpone full THAAD deployment in order to conduct an environmental review was a measure to follow domestic law.

Despite potential areas of disagreement, the two leaders are expected to express common resolve over threats from North Korea.

“The similarities in our approaches are already evident,” the White House official said, noting that both men had expressed willingness to engage with Pyongyang under the right conditions. “Even once the conditions may present themselves, to enter into dialogue we must maintain and actually increase pressure on North Korea. That’s President Moon’s approach; it’s President Trump’s approach.”