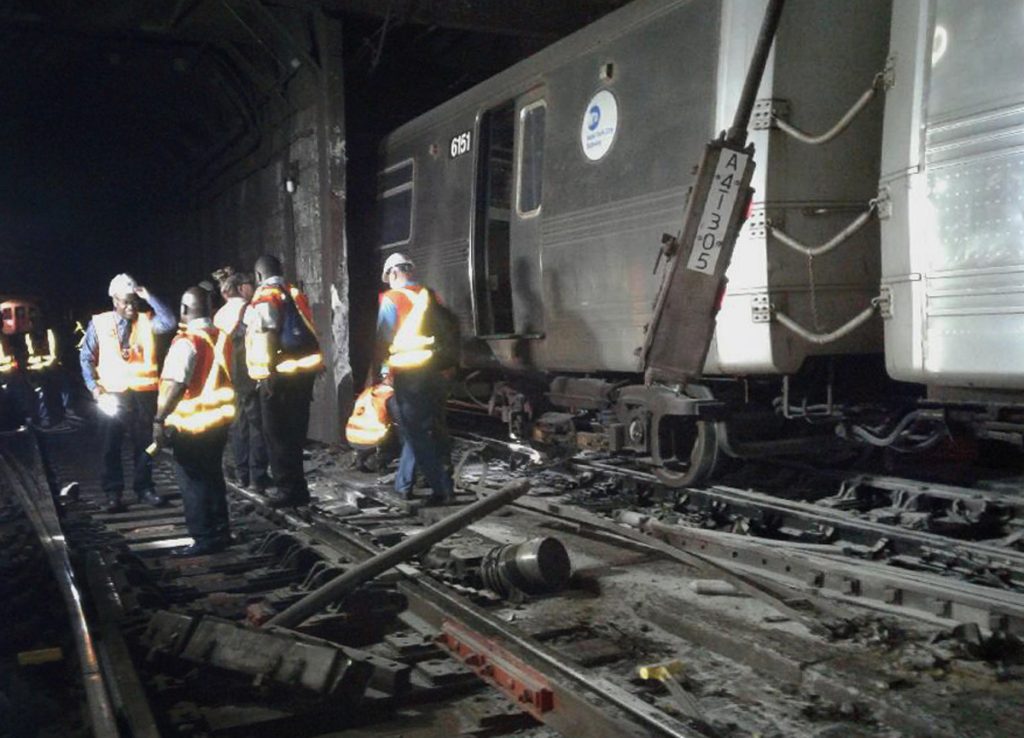 A subway train derailment that injured nearly three dozen people and sparked major delays is being blamed on human error, not a track defect.

A preliminary investigation indicates the derailment Tuesday morning in Harlem was caused by “an improperly secured piece of replacement rail that was stored on the tracks,” Metropolitan Transportation Authority Chairman Joe Lhota and Interim Executive Director Ronnie Hakim said in a joint statement late Tuesday.

“Storing equipment in between tracks is a common practice employed by railroads across the country to accelerate rail repairs,” the statement said. “The key to this being an effective and safe practice is making sure that the extra equipment is properly bolted down, which does not appear to have happened in this case.”

The derailment tossed people to the floor and forced hundreds of passengers to evacuate through darkened tunnels.

Crews are inspecting “every inch of rail” to ensure that every replacement part “is properly stored and secured,” MTA officials said, adding that the investigation is ongoing.

Service on the four affected subway lines was restored Wednesday morning, though riders were told to expect residual delays.

Passengers on the A train Tuesday said it suddenly jerked and began shaking violently as it approached the station at 125th Street and St. Nicholas Avenue.

The derailment came after a winter and spring marked by mechanical failures, power outages and several episodes in which passengers were trapped on stuck trains for an hour or more. Some state lawmakers demanded that the Legislature take up emergency funding for the system in a special session scheduled for Wednesday.

“It is my expectation that with new leadership brought by Joe Lhota, the MTA will address the fundamental issues plaguing the transit system and overhaul the organizational structure of the MTA,” the Democratic governor said.