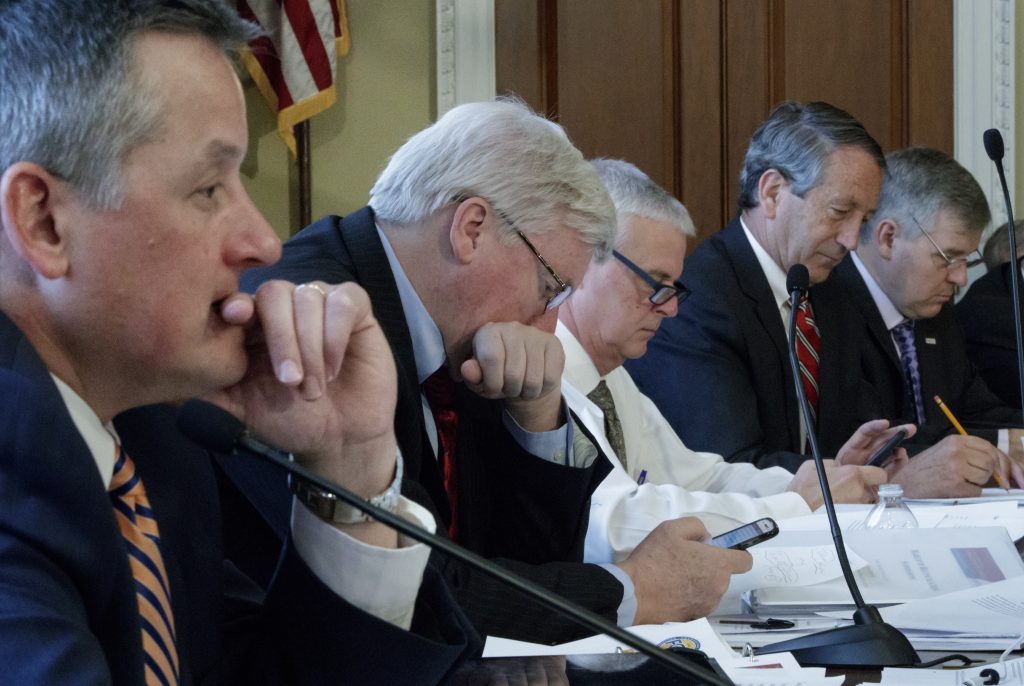 As their counterparts in the Senate struggled Tuesday to advance a high-profile health-care bill, House Republicans confronted their own critical failure to agree on a fiscal 2018 budget resolution.

Passing a budget is about much more than next year’s spending for GOP lawmakers. It also sets the stage for special budget procedures – known as reconciliation instructions – that will allow Republicans to pass major legislation without a filibuster from Senate Democrats.

But even the promise of tax reform and long-term spending cuts has not yet been enough to bring a fractious group of House Republicans together. A scheduled Thursday meeting of the House Budget Committee to prepare a budget resolution for a floor vote was canceled Tuesday amid continued GOP infighting.

Rep. Steve Womack, R-Ark., a Budget Committee member, lamented Tuesday that the budget “should have been put to bed a long time ago.”

“It’s almost like we’re serving in the minority right now,” he said. “We just simply don’t know how to govern.”

House leaders struck an optimistic note last week after GOP defense hawks and deficit hawks appeared to agree on a compromise figure of $621 billion for defense spending in fiscal 2018. But another thorny issue has derailed the talks: how much entitlement spending to trim from the federal budget over the coming decade.

Most Budget Committee Republicans are prepared to trim $200 billion from the federal budget over ten years, but hard-line conservatives are pushing for even more cuts to federal spending that now totals roughly $4 trillion a year.

Rep. Mark Meadows, R-N.C., chairman of the House Freedom Caucus, said he has personally identified $300 billion of potential cuts to mandatory spending – programs such as Medicare and Medicaid that are not appropriated on a regular basis by Congress. In particular, he said, conservatives want cuts to the federal Supplemental Nutrition Assistance Program (a.k.a. food stamps) as well as Temporary Assistance for Needy Families, the main federal welfare program.

“To suggest that there’s no waste or inefficiencies in those areas would defy history,” he said.

But the chairmen of the House committees that would be charged with wringing out those inefficiencies are balking at being essentially ordered around by the Budget Committee, and that has talks in a fresh stalemate as a week-long July 4 holiday recess approaches. Under the typical yearly budget cycle, the House and Senate pass a budget resolution by April 15.

Budget Committee spokesman Will Allison said the panel’s chairman, Rep. Diane Black, R-Tenn., “is 100 percent committed to getting a budget done” and “plans to keep this process moving after the July 4th recess.”

“Almost five months into the Trump Administration, House Republicans still haven’t met their most basic responsibility to pass a budget,” she said in a statement. “Time is quickly running out to pass a budget, enact appropriations bills and avert a catastrophic default on the debt. Even with control of the White House and majorities in Congress, Republicans have had nothing but chaos and cold-heartedness to offer American families.”

Further complicating matters for the GOP is what the reconciliation instructions will look like and to what degree they should include far-reaching entitlement reforms at all.

Rep. Charlie Dent, R-Pa., a moderate appropriations subcommittee chairman, said he wants the budget to set top-line spending numbers for 2018 and set the stage for a tax-reform bill. “Beyond that, most of the rest of it is aspirational,” he said. “If tax reform is the goal, dealing with entitlement changes simultaneously makes the tax reform effort much harder, not easier.”

Meadows, on the other hand, wants the budget not only to encompass entitlement reforms, but also to sketch out in some detail what shape a tax reform package might take – and he also said an extension of the federal debt ceiling, an issue set to come to a head this fall, ought to be part of the discussion as well.

“There’s about four critical decisions that we have to make, and the time is now to make them,” he said.

A few House members have urged their colleagues to confront reality: Setting new yearly spending levels, including a higher defense spending figure, will require negotiations with Democrats to reset the federal budget caps passed into law in 2011. Doing so will require navigating a potential Democratic filibuster in the Senate. The real power of the budget resolution, which can be passed with GOP votes only, comes in starting the reconciliation process that can be used for key Republican priorities.

“Let’s get this done,” said Rep. Tom Cole, R-Okla., another Budget Committee member. “It’s not like we can’t come back next year and do more. If we can actually make it stick that we can do things through reconciliation, then I think we really open the door.”