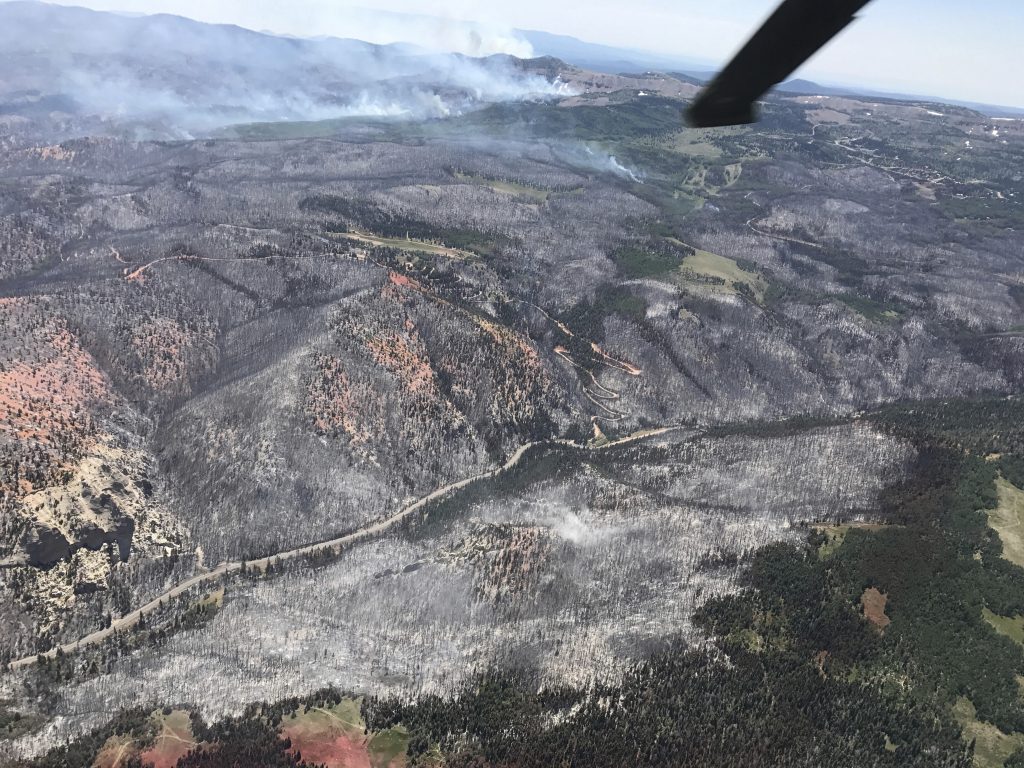 The nation’s largest wildfire has forced more than 1,500 people from their homes and cabins in a southern Utah mountain area home to a ski town and popular fishing lake.

Firefighters battled high winds as they fought a fire that has grown to 72 square miles and burned 13 homes — larger than any other fire in the country now, state emergency managers said.

The estimated firefighting costs now top $7 million for a fire started June 17 near Brian Head Resort by someone using a torch tool to burn weeds, they said. Investigators said they know who the culprit is, but they haven’t yet released the person’s identity or what charges will be filed.

Crews in California, meanwhile, were making gains against two new fires that spread quickly, and Arizona firefighters had to ground aircraft because of unauthorized drones over a fire near Flagstaff.

The Utah fire began near the ski resort town of Brian Head, generally known for weekend getaway homes for Las Vegas residents. It has spread several miles east to an area around Panguitch Lake, a popular spot for fishing.

Authorities ordered more evacuations Monday in a sparsely populated area, as stronger winds and lower humidity develop that could push fire growth north, after calmer weather kept its growth in check over the weekend. The fire is about 10 percent contained.

About 175 people have been briefly allowed back to their homes near Panguitch Lake since Sunday under escort, said Denise Dastrup with the Garfield County Sheriff’s Office.

Randi Powell said her grandfather is hoping to get up to see his cabin on Tuesday. Powell said it has been an “emotional roller coaster” for her and her grandparents, who live part of the year at a cabin near the fire.

Powell said she and her sister helped grab family heirlooms, pictures and important documents last Thursday when her grandparents had to evacuate on short notice.

Powell is relying on social media updates from friends and others who live or have homes in the area. So far, it appears her grandparents’ 5-bedroom cabin, built about 60 years ago, is still intact, she said. But that hasn’t stopped them from worrying.

“There will be uncertainty until you get up there and walk through it,” said Powell, 32, who lives about one hour away in Cedar City. “Until it’s totally out, you won’t know if you’ll be OK.”

At Brian Head Resort, officials are hoping that hot spots near where the blaze started will calm down enough to allow officials to lift the evacuations in time for 4th of July festivities that usually bring an estimated 15,000 people to listen to music and watch fireworks, resort spokesman Mark Wilder said.

If the events can happen, they will likely be scaled back with fewer visitors — and with no fireworks, he said. Wilder said they’re hopeful but realistic.

“Things change day to day,” Wilder said. “This thing has been a beast.”

Meanwhile, firefighters made gains against a wildfire in California’s Central Coast region that forced about 250 people to evacuate their homes.

The evacuation order is for a string of homes along sparsely populated rural roads in and around the small town of Santa Margarita about ten miles (16 km) north of the much larger city of San Luis Obispo.

Another California wildfire, sparked by a traffic accident on a remote stretch of a highway 80 miles east of Los Angeles, grew to more than nine square miles (23 sq. kilometers) in hot and windy conditions. The blaze was 20 percent contained at midday Tuesday.

Two people were hospitalized in the solo-vehicle crash and subsequent car fire that caused the wildfire Monday afternoon.

Conditions remained warm, dry and windy in Southern California, but a lengthy spell of extreme heat was receding. The U.S. Forest Service advised people that what appeared to be a new fire in the San Bernardino Mountains was dust being blown about from an area that burned recently northeast of Big Bear Lake.

In New Mexico, Gov. Susana Martinez ordered flags to fly at half-staff in honor of a volunteer firefighter who died from injuries suffered while battling a brushfire in eastern New Mexico last week. Nara Visa Fire Chief Gary Girard told The Eastern New Mexico News that John Cammack was severely burned after falling from a fire engine when the winds shifted and the flames changed direction.

In Arizona, firefighters had to ground aircraft after they spotted drones being flown near the fire, Bureau of Land Management spokesman Dennis Godfrey said. The Arizona Republic reports another unauthorized drone was spotted Sunday, temporarily halting aerial efforts to put out a fire northwest of Flagstaff that is 88 percent contained.