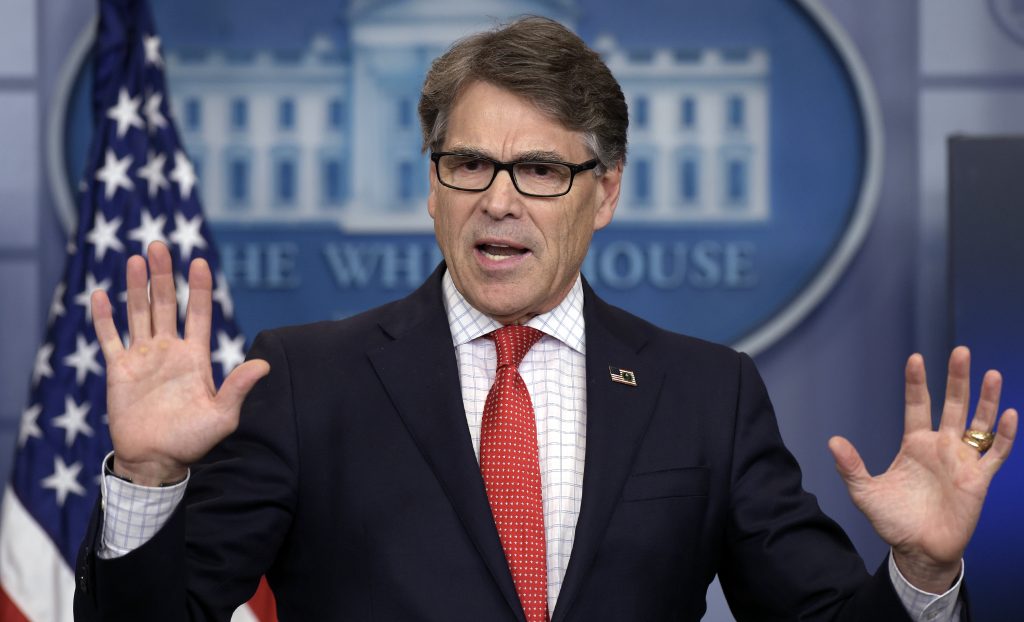 With U.S. exports of oil and natural gas surging, President Donald Trump says the U.S. is on the brink of becoming a net exporter of oil, gas and other resources.

Trump is highlighting what he calls “energy dominance” as the White House hosts a series of events focused on jobs and boosting U.S. global influence. The self-proclaimed “energy week” follows similar policy-themed weeks on infrastructure and jobs.

Energy Secretary Rick Perry said Monday the Trump administration is confident officials can “pave the path toward U.S. energy dominance” by exporting oil, gas and coal to markets around the world, and promoting nuclear energy and even renewables such as wind and solar power.

“For years, Washington stood in the way of our energy dominance. That changes now,” Perry told reporters at the White House. “We are now looking to help, not hinder, energy producers and job creators.”

The focus on energy began at a meeting between Trump and India’s Prime Minister Narendra Modi, with U.S. natural gas exports part of the discussion. Trump is expected to talk energy Wednesday with governors and tribal leaders, and he will deliver a speech Thursday at the Energy Department.

Trump has long used “dominance” to describe his approach to energy, and Perry and other administration officials have begun echoing the phrase as a shorthand for policies that “unleash” unfettered energy production on U.S. land and waters. Similarly, during his administration Obama spoke about an “all of the above” energy policy intended to reassure skeptics that he supported a wide range of U.S. energy production.

Trump signed an executive order in April to expand oil drilling in the Arctic and Atlantic oceans, reversing restrictions imposed by Obama. Trump has also pushed to revive U.S. coal production after years of decline. Coal mining rose by 19 percent in the first five months of the year as the price of natural gas edged up, according to Energy Department data.

U.S. oil and gas production have boomed in recent years, primarily because of improved drilling techniques such as fracking that have opened up production in areas previously out of reach of drillers.

A report released in January by the Energy Information Administration said the country is on track to become a net energy exporter by 2026. The report, issued two weeks before Trump took office, projects continued increases in oil and gas production, combined with a decline in coal and increased market shares for both natural gas and renewable energy such as wind and solar power.

Obama signed a law in December 2015 lifting a decades-old ban on most crude oil exports, resulting in millions of barrels of exports every month to China, Italy, the Netherlands and other countries. The U.S. began exporting liquefied natural gas to India, China, Brazil and other countries in February 2016.